Many cultures celebrate an animal who, while not the largest or strongest, outwits all around him. In Europe this is Reynard the fox; in the Malay world of Southeast Asia it is Sang Kancil the mousedeer (pelanduk). Malay folklore is full of accounts of how the mousedeer gets the better of the other animals by his intellect and trickery. But in addition to oral tales and childens’ stories there is also a written epic in Malay, the Hikayat Pelanduk Jenaka or 'Tale of the Wily Mousedeer', probably dating from the 15th or 16th century, which is a highly sophisticated literary composition. 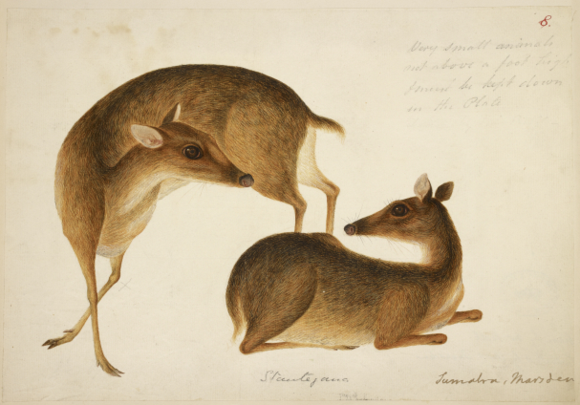 Sumatran mousedeer. Drawing by a Chinese artist in Bengkulu, between 1784 and 1808, reproduced in William Marsden, A history of Sumatra, 3rd edition (London, 1811). British Library, NHD 1/8.

In the Hikayat Pelanduk Jenaka, the mousedeer tricks the other animals into thinking that he has magic powers, and holds court from an ant-hill. He uses these 'powers' to make peace between the goats and the tigers and to gain their allegiance, and then by his cunning gets the better of the lion, elephant and crocodile. Finally the mousedeer sees off his enemies the monkeys, and becomes the ruler of the jungle. This satire on power has been characterised by Ian Proudfoot: ‘It is subversive; it is cynical. It attacks authority rather than bolstering it … Its premise is that royal power rests on false consciousness. It demonstrates how a gullible public can be made to think they need an authority figure through a combination of religious fraud and false security fears’ (Proudfoot 2001: 70-71).

There are three Malay manuscripts of the Hikayat Pelanduk Jenaka in the British Library which have now been digitised, all originating from Penang or Kedah around 1805. MSS Malay B.2, from the collection of John Leyden, is dated 1219 AH (1804/5 AD), and was published by Klinkert in 1893. The second copy (MSS Malay D.5) is undated, but comprises the second work in a volume containing four different tales, and is in the same hand as the first item, Hikayat Muhammad Hanafiah, which was copied by Mahmud ibn Husain on 14 Syaaban 1220 (7 November 1805). 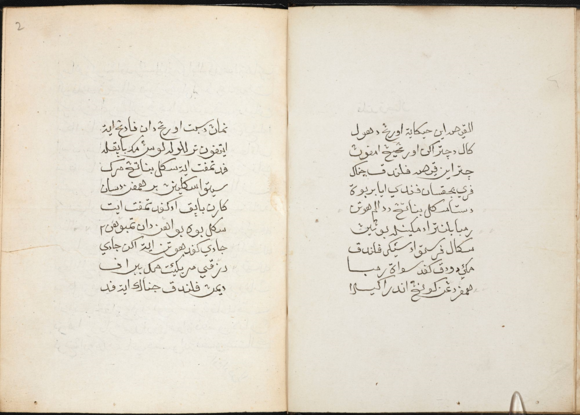 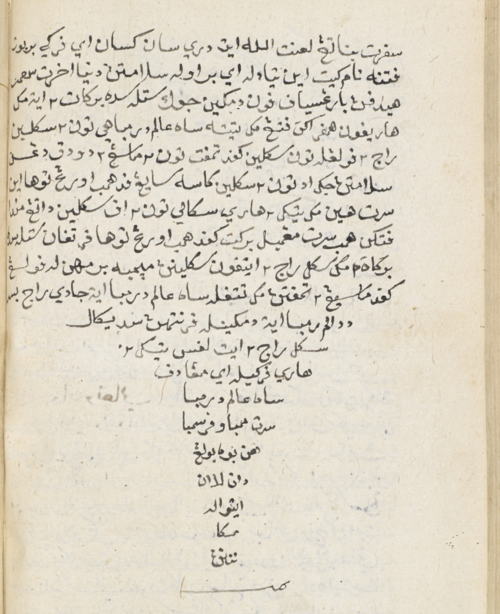 Colophon of Hikayat Pelanduk Jenaka, undated but in a volume together with copies of Hikayat Muhammad Hanafiah and Hikayat Syahi Mardan, both of which are in the same hand and dated 1220 (1805/6). British Library, MSS Malay D.5, f. 169v.

The third copy of Hikayat Pelanduk Jenaka is again in a composite volume (MSS Malay B.10), and was copied in 1805 by a scribe who describes himself as seorang fakir Ahmad Keling, ‘a humble mendicant, Ahmad, of south Indian origin’. By means of a particular decorative flourish on the initial word, al-kisah, the writer can be identified as Ahmad Rijaluddin bin Hakim Long Fakir Kandu, author of the Hikayat Perintah Negeri Benggala (Add. 12386), and brother of Ibrahim, Raffles’s chief scribe, from a prominent Chulia (south Indian) family in Penang. 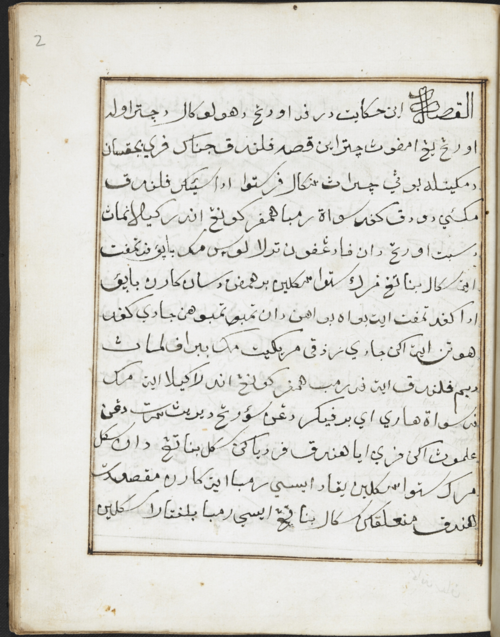 The final letter of the word al-kisah is the Arabic letter tā’ marbūṭa, which in Malay manuscripts is often adorned with a decorative knot. Significantly, the Malay name of this letter is either ta marbuta or ta bersimpul, ‘knotted ta’. Artistic variations can include multiple-looped knots, double-headed loops, and concave or convex headed loops to these knots. Knotted ta marbuta is found in manuscripts from all over the archipelago, with some of the most complex versions found in the surah headings in Qur’an manuscripts from Java (Gallop 2005: 203-9). And yet however elaborate the embellishments of the knot, they are generally conducted along a horizontal plane. In the manuscript of Hikayat Pelanduk Jenaka, however, the 5-looped double-headed ta marbuta is extended vertically. This form of the letter has only ever been seen in one other Malay manuscript: the Hikayat Perintah negeri Benggala; moreover, both texts are set in double-ruled frames in a slightly acidic brown-black ink which has begun to eat into the paper. All these factors leave little doubt that ‘Ahmad Keling’ is indeed Ahmad Rijaluddin.

The heading for the penultimate chapter in a Qur'an manuscript from Java, Sūrat al-Falaq, with examples of knotted ta marbuta on the words Sūrat and Makiyyah, and on final ta of ayat. The final example has six loops, double headed on the bottom and concave headed at the top. British Library, Add. 12343, f.189r.

Posted by Annabel Gallop at 1:04 AM