A Jawi sourcebook for the study of Malay palaeography and orthography

Malay manuscripts rarely give full details about when and where they were written, and we are often reliant on the biographies of western collectors in order to date a manuscript or gauge its origin. Little such information is available for one Malay manuscript (MSS Malay B 13), entitled blandly Kitab pengajaran pada segala orang sekalian, ‘A book of instruction for everyone’. It contains moral guidance on all aspects of social behaviour, with sections for example on anger (murka, f.31r), hopes and fears (pengharapan dan ketakutan, f.25r) and love and passion (berahi dan asyik, f.35r), on family relations including the role of fathers (pangkat bapak, f.42r) and sons (anak laki-laki, f.44r), and between layers of society, such as masters and servants (orang yang dipertuan serta yang diperhamba, f.52v). The annotation ‘Hastings MS’ indicates it may have been owned by the Marquess of Hastings, who succeeded Lord Minto as Governor-General of Bengal from 1813 to 1823. 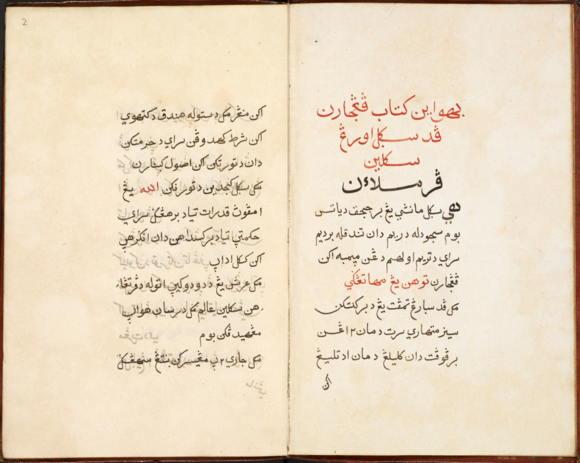 One possible clue to the provenance of this manuscript may lie in the handwriting. The manuscript is written in a clear, neat and precise hand, with carefully spaced words, meticulous diacritical marks, and - very unusually - paragraphs: all hints that the book was probably specifically written for a European patron and thus needed to be very legible. Such a school of scribes was active in Batavia in the early 19th century, associated with the General Secretariat (Algemeene Secretariaat) of the Dutch administration, founded in 1819. Manuscripts by this group of scribes can be seen in Leiden University Library, the National Library of Indonesia and the Berlin Staatsbibliotheek, all distinguished by great care in the writing, and stylish use of rubrication and bold letters for certain significant words. One highly distinctive letter form found in MSS Malay B 13 which is associated with this school is the ‘squashed’ form of medial ha, with the loops above and below both bent to the right, which suggest that the Kitab pengajaran was copied in Batavia in the early 19th century (despite endpapers of English paper watermarked '1794', which may have been added later when the MS was rebound in Calcutta). If it was acquired during the British administration of 1811 to 1816, this would make it one of the earliest known examples of this characteristic 'Batavia' hand.

Awareness of the importance of palaeography – the study of historical styles of handwriting – for the study of manuscripts was the impetus behind the recent publication of ‘A Jawi Sourcebook for the Study of Malay Palaeography and Orthography’ as a special issue of the journal Indonesia in the Malay World in honour of Professor Ulrich Kratz, who recently retired from SOAS after three decades of teaching Malay and Indonesian literature. The Jawi Sourcebook was compiled with the aim of presenting a body of source material to enable a fresh look at Jawi script, and is modelled on a landmark guide to European palaeography by my former colleague Michelle Brown (1990), despite a complete reversal of theoretical grounding. Brown’s book, A guide to Western historical scripts from Antiquity to 1600, presented photographic facsimiles of manuscripts accompanied by comments on the handwriting, in order to illustrate over 50 acknowledged styles of script in Latin letters. Yet in the absence of any recognized categorization of Malay hands, all that the Jawi  Sourcebook aims to do is to to present, in chronological order, the raw material that could be utilised to advance the study of Malay palaeography and orthography. This has been done by selecting a corpus of 60 securely dated or dateable Malay manuscripts from the late 16th to the early 20th century, each of which can be located in a specific part of the Malay world, from Aceh to Aru and from Melaka to Mindanao. Thanks to the recent Malay manuscripts digitisation project, which has enabled full online access to all the Malay manuscripts in the British Library, many of these were selected by international contributors to the Jawi Sourcebook. A selection of sample lines from British Library manuscripts, accompanied by comments on the handwriting by various scholars, is presented below.

'In this MS, two dots are connected and look like a short line, while three dots look like ‘one dot and a short line’. Note the unusual appearance of segala, here and elsewhere in this MS, as the ga-lam resembles a capital ‘B’' [at the end of the first and third lines above].   Yumi Sugahara, Osaka University (Jawi Sourcebook, no.17)

'The script is small and neat, and appears to have been written by a professional scribe. The initial sin is in the form of a flowing stroke. In order to preserve a straight left edge, the copyist varies extended and close strokes, resulting e.g. in a relatively long tail of the wau in the pre-final line or in a rather ‘crammed’ way of writing the last words in the final line.' Edwin Wieringa, Cologne University (Jawi Sourcebook, no.21)

‘Ibrahim does indeed possess ‘characteristic handwriting’ (Teeuw et al 2004: 16): very upright, inscribed confidently and with considerable brio. The letter forms are very distinct, though he is occasionally somewhat cavalier about the dotting. There are no dots to distinguish ga and kaf.’ Mulaika Hijjas, SOAS (Jawi Sourcebook, no.25)

Kitab ubat-ubat dan azimat, ‘Book on medicine and talismans’. A note on the front cover reads: ‘Tay Segalla obat or The Malay Materia Medica, from the practice of Tama, Physician to the Royal household of His Majesty of Pontiana, copied May 17th 1813’. British Library, MSS Malay B.15, f. 2r.

'The handwriting in this manuscript is neat and clear with a faint slant towards the left. Occasionally letters that follow an alif are raised upwards to link to the top of that alif (e.g. the nga in ‘jangan’). The letter kaf is sometimes written in an elongated form (e.g. ‘manteraku’). Although the hand is legible the spelling is erratic and inconsistent, making it difficult to determine the ingredients and spells used in the treatments. Therefore a comparison with similar texts found in other manuscripts is necessary to determine the correct reading.' Farouk Yahya, SOAS (Jawi Sourcebook, no.28)

'The writing is neat and regular which is typical of Husin bin Ismail. In contrast to Abdullah bin Abdul Kadir Munsyi (no. 38), this scribe has no evidently distinct features in his writing. A characteristic which he shares with other scribes is writing kaf for ga ... Interestingly, in our fragment he writes orang besar differently on both occurrences, first conjoined and then separated. Remarkable is the spelling of cucu, using the number ‘2’ (c.w.2).' Roger Tol, KITLV, Jakarta (Jawi Sourcebook, no.35)

‘The syair is written in black ink in two columns, in a characteristic Brunei literary hand familiar from hikayat and syair manuscripts, notable for its extreme horizontal aspect, and very different from the chancery hands evident in royal Brunei letters over the centuries (Nos. 1 and 5). The orthography too reflects Brunei phonetic norms such as the preference for medial a rather than ĕ pĕpĕt.’  Ampuan Haji Brahim bin Haji Tengah, Universiti Brunei Darussalam, and Annabel Teh Gallop, British Library (Jawi Sourcebook, no.56) 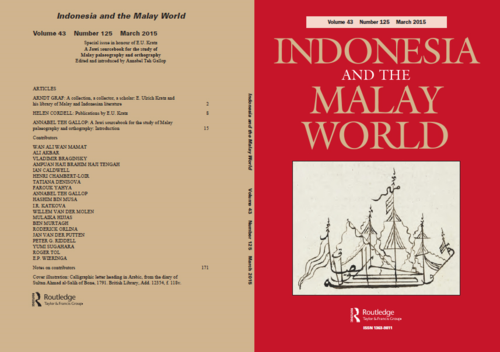 Posted by Annabel Gallop at 1:49 AM