The ‘Blood Moon’ in a Thai manuscript

On Monday 28 September the media was full of reports and images of the so-called ‘blood moon’ seen in the early hours, caused by a full lunar eclipse.

This phenomenon was also described in a nineteenth-century Thai manuscript held in the British Library, Or.15760, probably dating from the time of King Rama IV (also known as King Mongkut) of Siam, who reigned from 1851 to 1868.  Rama IV was a passionate astronomer and astrologer, who actually died after catching malaria during an excursion to southern Thailand to watch a total solar eclipse that he had accurately predicted. In 2003, a newly discovered asteroid, 151834 Mongkut, was named in honour of King Rama IV and his contributions to astronomy.

In our manuscript, two types of ‘red moons’ are illustrated at the top of folio 25, together with a warning that following the occurrence of such a moon three bad things might happen: the price of rice may increase, robberies may take place, and there is even the prospect of war! The entire population, including governors and Brahmins (learned men) could suffer great hardship.

The manuscript, which contains illustrations together with astrological interpretations of various shapes of the sun, moon, planets, and clouds, has been fully digitised and can be viewed online here. 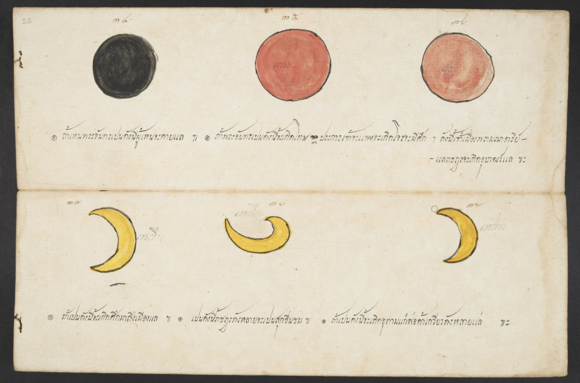 Illustrations of possible appearances of the moon. Tamra phichai songkhram (Divination manual for the prediction of wars and conflicts). British Library, Or.15760, f.25

With thanks to Thanyarat Apiwong for help with the translation

Posted by Annabel Gallop at 1:51 AM