Various buildings in and around Bangkok, including four royal palaces, come from the hand of a German architect who was also a distinguished art historian and  passionate collector of Thai art. Karl Siegfried Döhring was born in 1879 in Cologne, Germany, into the family of a pastor. He passed his Abitur (German higher education entrance qualification) in 1899 in Neustettin - now Szczecinek in Poland - and went on to study architecture at the Royal Technical College in Berlin-Charlottenburg. At the same time he attended a course on art history, during which he developed a particular interest in the cultures and architectures of Southeast Asia. Döhring graduated in 1905 and in the same year applied for a post in the Siamese civil service. 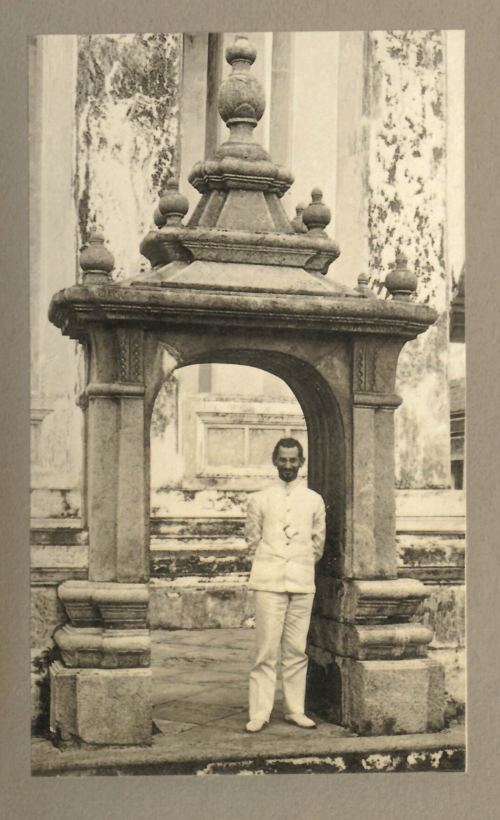 Photograph of Döhring standing by a gate at Wat Chetuphon, Bangkok. He admired the fact that the gate was made from granite in a style showing baroque architectural influences. From Döhring’s book Buddhistische Tempelanlagen in Siam, second volume of plates, plate 114. British Library, 7818.pp.8

From 1906 to 1909 Döhring was an engineer in the Royal Siamese railway department where he helped to design administrative buildings for the department and rail stations for the Siamese provinces. Two of his rail stations still exist: Thonburi station in Bangkok that was built in 1900 in the style of the European expressionist brick architecture (the building, which was destroyed in WWII but then rebuilt, is now part of the Sirirat Hospital), and Phitsanulok Station, which is reminiscent of the southern German half-timbered building style.

King Chulalongkorn (Rama V) had a passion for European cultures and modernisation, and it was no surprise that Döhring soon became a superintendent, architect and engineer at the Siamese Ministry of Interior. In September 1909 King Chulalongkorn nominated him as his First Architect. Prince Dilok Nabarath, who had studied in England and Germany, commissioned Döhring to build a new palace in a simple, inexpensive European style, including decent quarters for servants. Other members of the royal family also commissioned buildings for various purposes. For Queen Sukhumala Mahasiri Döhring designed an elegant palace in the Art-Déco style, while at the request of King Chulalongkorn, he designed a palace in Phetchaburi, Phra Ram Rachaniwet, which was only finished in 1915, five years after the king’s death. With this palace, the Art Nouveau style was introduced in Siam. Other important designs by Döhring are Wang Varadis and Tamnak Somdej, both located in Bangkok.

Döhring returned to Germany when his first wife suddenly passed away in 1911. In the same year, he submitted his dissertation about the Phrachedi in Siam at the Royal Saxon Technical College in Dresden and obtained his first Ph.D. degree. In 1912 he returned to Siam, and his scope of responsibilities broadened. He was involved in the architectural planning of the first university in Siam, Chulalongkorn University. 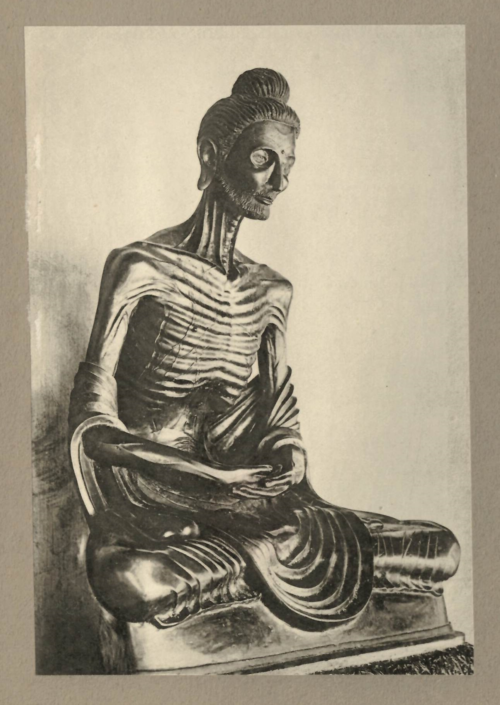 Photograph of a statue of the fasting Siddharta Gautama which was inspired by a similar statue in the Greco-Buddhist art style in the collections of the Lahore Museum. This statue is held at Wat Chetuphon in Bangkok. From Buddhistische Tempelanlagen in Siam, second volume of plates, plate 180. British Library, 7818.pp.8

At the same time, Döhring was also supervisor for research on Thai antiquities, a task that took him on expeditions to ruined cities in northern Siam. Due to a severe illness he had to return to Germany again in 1913, but he used this time to obtain two more Ph.D. degrees (in archaeology and art history at the University Erlangen, and in law at the Royal University Greifswald). An updated and extended version of his dissertation on Buddhist temples in Siam was published in three volumes in 1920 by Asia Publishing House (Bangkok) and Vereinigung Wissenschaftlicher Verleger Walter de Gruyter et al. 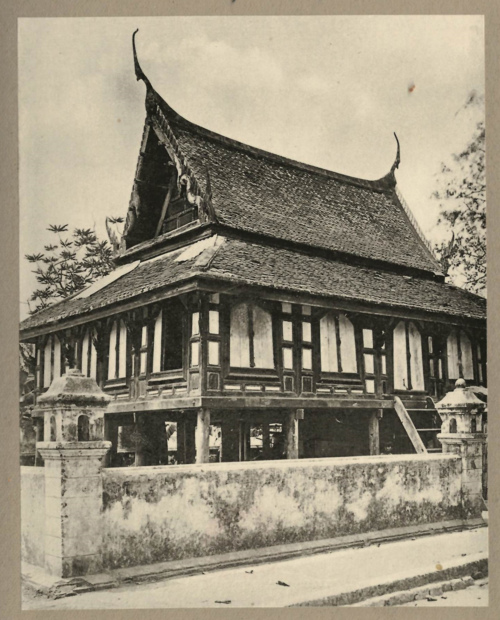 World War I and the subsequent economic crises prevented Döhring from ever returning to Siam again, but his passion for Thai art remained. In 1918 he gave up his work as an architect and dedicated his time mainly to research on Thai art and art history. His publications “Art and art industry in Siam” (ca. 1915), „Buddhistische Tempelanlagen in Siam" (1920), and „Siam" (1923) were among the first illustrated scholarly researches into areas of Thai art such as lacquer, mother-of-pearl and porcelain works, manuscript furniture, textile art, funeral art, and theatre costumes. Part one of his book Siam provides illustrated descriptions of the country and its people with topics like family, law, water ways, funerals, life at the royal court, music and theatre. Part two looks at fine art and examines art symbolism, the role of the Ramakien, architecture, painting, wood carving, ceramics, lacquer and mother-of-pearl works, mosaic art, and textile art. 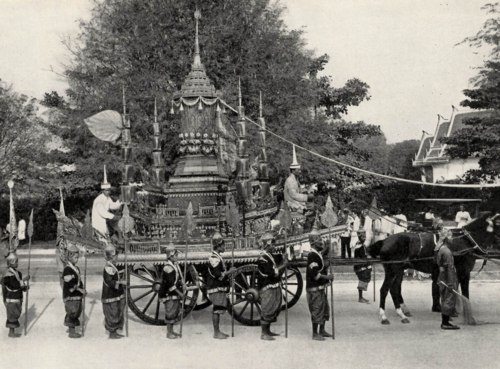 Döhring’s most impressive publication is perhaps his Art and art industry in Siam which was edited under the instructions of the Royal Siamese government and published by Asia Publishing House (Bangkok). The book - consisting of two large volumes (measuring 49 x 62 cm) - is a work of art itself: printed by letterpress, with unique handcrafted metal plates showing a scene from the Ramayana on both front covers. It contains high quality images and descriptions of Thai lacquer designs in black and gold, and was, at the time, the leading work on Thai lacquer art. 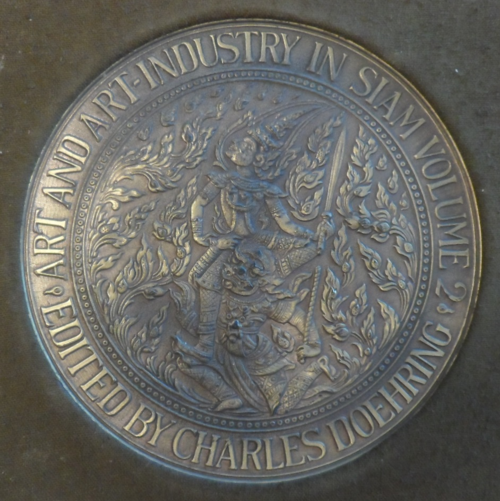 Detail from a side panel of a manuscript cabinet in the National Library in Bangkok. Art and art industry in Siam, volume 2, plate 39. British Library, X.946

Döhring was a passionate collector of Thai antiques and works of art and handicrafts. From his stays in Siam he brought back several Thai manuscripts, manuscript chests, lacquer works, porcelain and other items which are now held in the collections of the Grassi Museum für Völkerkunde zu Leipzig and the Ethnological Museum in Berlin. Eleven manuscripts that are held in Leipzig, which mainly contain literary, medical and legal texts, were described by Klaus Wenk in 1968. Under the pseudonym 'Ravi Ravendro' Döhring wrote novels and translated books by Edgar Wallace into German. Döhring passed away in 1941 in Darmstadt. 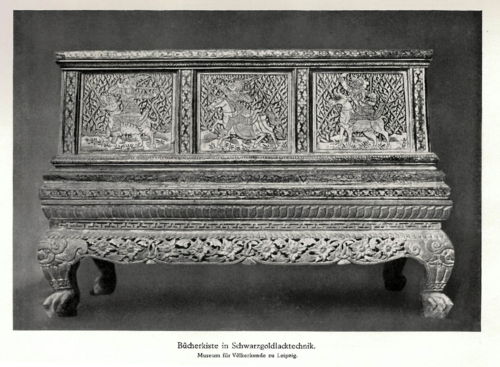 Photograph of a wooden manuscript chest, outstandingly carved and decorated with gold on black lacquer, one of the items Döhring brought back from Siam and held at in the Grassi Museum für Völkerkunde zu Leipzig. From Döhring’s book Siam, part 2, p. 69. British Library, J/10152.tt.26.a

Posted by Annabel Gallop at 2:03 AM