A Group of Sikh Miniatures on Ivory

A recently acquired group of miniatures painted on ivory and laid down on paper supports with identifying inscriptions,  still mostly with their original glass, is of considerable interest. Such items were increasingly the stock products of the tourist trade in Delhi in the later nineteenth century, but the inscriptions of this particular group suggested that they must have been made before 1850 and in Lahore or Amritsar rather than Delhi, the usual production centre for such items. The portraits include various Maharajas of the Punjab from 1839-49 with other rulers. They were presumably bought and pasted down onto sheets of paper in order to be sent off to Britain for the enlightenment of friends or relations at home, so that they could put a face to the names that occupied so much of the British press in the 1840s with the doings of the Lahore court and the two Sikh Wars, which ended in the annexation of the Punjab in 1849. Several of the inscriptions are unfortunately in error.

The miniatures are arranged in four groups. Maharaja Ranjit Singh of Lahore (r. 1799-1839) is given primacy of place in the first group with the Mughal Emperor Bahadur Shah Zafar (r. 1838-58) to his right and Ranjit Singh’s son Kharak Singh (r. 1839-40) to his left. The inscriber has wrongly identified the latter as Nau Nihal Singh (r. 1840), who was the son and successor of Maharaja Kharak Singh (see next). He was still only aged nineteen when he was killed on returning from his father’s obsequies by masonry falling from an arch, and the portrait is of his father Kharak Singh. For his portrait around 1840 showing him with just a chin beard, see Archer 1966, pl. 35. The inscribed ‘present King of Delhi’ (as the British called the Emperor) dates paintings and inscriptions to at least before 1858. The inscriber seems mistaken here also, since the portrait is surely of Bahadur Shah’s father Akbar II (r. 1806-37) (see Dalrymple and Sharma 2012, nos. 30, 32-36). 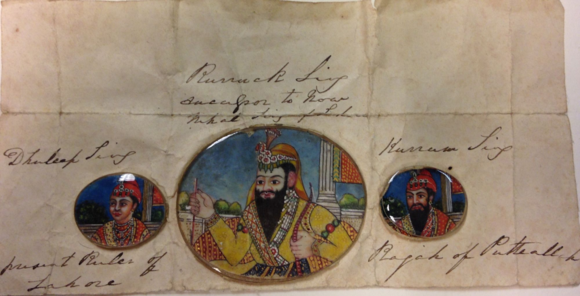 The second group has again a central portrait, that of Maharaja Kharak Singh (r. 1839-40), son and successor of Ranjit Singh, who died, it was rumoured, of poison. He has a very distinctive long pointed black beard. The inscriber has muddled Kharak Singh and his son Nau Nihal Singh. The latter was succeeded by Maharaja Sher Singh (r. 1840-43), another son of Ranjit Singh, who is represented later in the portraits, see below. Kharak Singh’s successor was Maharaja Dalip Singh (r. 1843-49), the youngest son of Ranjit Singh, identified with an inscription ‘the present Ruler of Lahore’ which firmly dates the whole group to before 1849. The other portrait in this group purports to be Maharaja Karam Singh of Patiala (r. 1813-45), ruler of one of the Cis-Sutlej states outside Ranjit Singh’s empire and allied to British India, but this portrait does not resemble him (for his portrait, see Stronge 1999, no. 188 and Falk and Archer 1981, no. 553). Again the long pointed black beard suggests Kharak Singh as in Add.Or.5680 above.

Four of the remaining ivories are meant to be of local notables. These are the Maharaja of Nepal, who would seem to be the teenage Maharaja Surendra Bir Bikram Shah (b. 1829, r. 1847-81). Next is the Begum Samru of Sardhana (d. 1836) who ruled her own jagir near Meerut east of Delhi, one of the most redoubtable characters of early 19th century India. Next, a portrait labelled as Mirza Jahangir, the third and favourite son of the Emperor Akbar II, who died in confinement in Allahabad in 1821, cannot be him since this figure is wearing a Sikh type of turban. In fact he is almost certainly the missing Maharaja Sher Singh of Lahore (r. 1841-43), identified by comparison with other portraits by Sikh artists as well as his well-known portraits by both Emily Eden and the Austrian artist T.A. Schoefft (for his portraits by Indian artists, see Archer 1966, pls. 92, 104). Finally in this group is Dost Muhammad, the Amir of Afghanistan (r. 1825-39, and again 1845-63). Dost Muhammad repeatedly fought with the Sikhs in his first reign over the disputed border territory of Peshawar, but then allied himself with them in the second period of his reign before the final annexation. He is often depicted in other groupings of Sikh notables.

The various dates of rulers presented above suggest that the grouping of the portraits was done some time between 1847 and 1849. After the final annexation of the Punjab in 1849, artists in both Lahore and Amritsar produced many sets of portraits on ivory of Sikh rulers and notables in the period of their greatness. The British Library already has five such sets (Archer 1969, nos. 190-194), including one set from the 1850s that is almost certainly among the earliest known (Stronge 1999, no. 20), but this new set is definitely from the late 1840s. It must have been put together put together by a British officer probably in the British Residency in Lahore that was established by the Treaty of Bhairowal in 1846, and sent back home as suggested above for the enlightenment of his friends.

While the arrangement of the first two groups of three portraits is perhaps arbitrary, nonetheless the central large portrait flanked by two smaller ones closely resembles that of the jewels of bazubands, the jewelled armbands worn by the elite as can be seen in the larger portrait of Kharak Singh above (Add.Or.5684). Whereas portraits on ivory by Delhi artists were normally individual commissions, and even when in sets such as of the Mughal emperors were individually framed, the idea behind these groupings of Sikh notables seems to have been to have them mounted up in a frame, as are indeed all those in the British Library which are enclosed in 19th century frames (see Stronge 1999, no. 20). 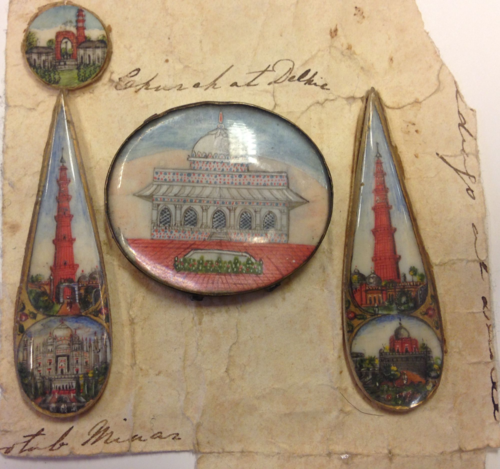 The set ends (apart from one unidentified ruler, Add.Or.5690) rather oddly perhaps with three pictures on ivory of monuments of Delhi, all of them mounted up on the same sort of paper and with inscriptions in the same handwriting. In the middle is what is meant to be the church at Delhi, the church of St. James, built by Col. James Skinner near the Kashmir Gate and consecrated in 1836. It does however look rather more like a Mughal tomb such as that of Salim Chishti at Fatehpur Sikri and clearly the artist did not have a very good model for his depiction, although the dome and the parapet are passable. The heavy eave and the Mughal jalis or screens should not be there, but the tomb of William Fraser of 1836 seems to be present in front of the church.

Pictures on ivory of monuments had a different purpose from portraits, since often at this period they were mounted as brooches. Indeed one of the earliest such examples is a picture of the gateway of the Taj Mahal mounted up in a gold brooch with an inscription saying that it was sent from India by Lady Sale in 1840 (private collection). Later such pictures were mounted up into ivory boxes or else, as small circles or ovals, into cufflinks or shirt studs. Apart from brooches, they could also, we now learn from this set, be turned into earrings, since it has two pictures of the Qutb Minar, the famous 12/13th century tower in old Delhi, painted on shapes that are surely destined to be long drop earrings, when encased in gold. Below the tower are painted little round pictures of the Taj Mahal in Agra on one and what appears to be the tomb of Ghiyath al-Din Tughluq on the other. An additional small circular painting of the Quwwat al-Islam mosque and the Qutb Minar may indeed have been for one of the roundels covering the ear lobe from which such drop earrings normally hung in the Victorian era. The roundel is actually loose but is positioned in the above image as if this was indeed the case.

The earring paintings can be dated by the presence of the cupola in Mughal style added to the top of the Qutb Minar during a restoration in 1828 by Major Robert Smith of the Bengal Engineers, which was removed in 1848. Although artists in Lahore or Amritsar might not necessarily have known this, they liked to be up to date with their depictions, so this is yet another reason to date the set to the late 1840s.

Although there is no direct evidence that this group of miniatures in ivory was painted in the Punjab, their subjects of local interest to the Punjab and their somewhat unsophisticated technique would certainly suggest that this was so. Sikh artists do not seem to have attempted to paint on ivory any earlier. Such work when done by Delhi artists is more refined and polished, and this will be the subject of a second blog.