Ofuda: in with the good, out with the bad (Part 1)

In a previous blog post, ‘Till death us do part – or not?’, we introduced the well-known episode of Ofuda-hagashi お札はがし(‘removing the ofuda’) in the story of the ghostly lover, Botandōrō 牡丹灯籠.  Ofuda-hagashi is one of the most thrilling scenes in the story where the servant betrays his master by removing the protective ofuda (paper amulets), allowing the ghosts to slip into the house where the hero is barricading himself from his ghost lover.

A sample page from the BL Ofuda collection. From left to right, Buddha, possibly in the Western Paradise; the figure of a high-ranking Buddhist monk; and the back of a mirror dedicated to the Sun goddess Amaterasu. From a collection of c.330 Japanese amulets printed up to the 1880s, mounted in 5 albums. Ofuda harikomichō : Daiei Toshokanzō  お札貼込帳 : 大英図書館蔵]. British Library, 16007.d.1(5) 71-73r

What are Ofuda? It is hard to give a quick and easy definition of these paper amulets, because there are so many varieties with different functions. If we attempt to give a general description of Ofuda for readers who have never come across them, we could say that an Ofuda is usually a piece of paper or a wooden amulet, on which is written or printed religious material such as figures of Shinto deities, Buddhas, high-ranking monks, Buddhist sutras, etc.  In the majority of cases, they are issued by Japanese religious bodies such as temples and shrines for their followers. Then, the owner of Ofuda can make devotional visits to the places from which they received their Ofuda to pray and renew them on a regular basis. In general, we can distinguish at least two types of Ofuda: one to give protection from bad spirits, and the other to bring good luck to the owners. 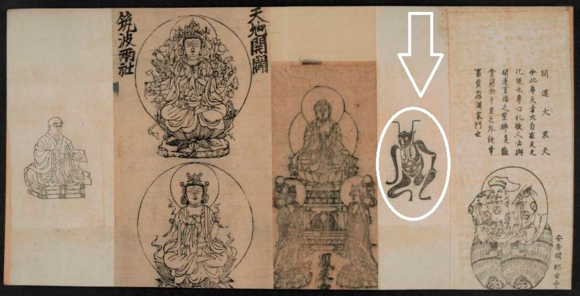 Shown above is an example of a protective Ofuda. In the story of Botandōrō, as long as the hero stays inside his house with the protection of the Ofuda, he is safe. But later in the story the Ofuda is secretly removed by someone else, allowing the ghost to slip into the house and take his life. From this story line, we can guess that the Ofuda which were put up to prevent ghosts from entering the house might be similar to Tsuno Daishi which is typically placed outside entrances to houses. 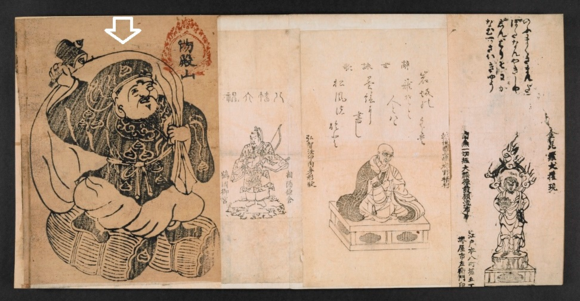 And shown above is an example of an Ofuda as a good luck amulet. Daikoku 大黒, who is known as Mahākāla in the original Hindu pantheon, became Maheśvara in the Buddhist pantheon with the spread of Buddhism into East Asia. Eventually when he reached Japan, he was not only accepted as one of the Buddhist Devas, but also merged with Japanese god Ōkuninushi 大国主 and transformed into the god of wealth. 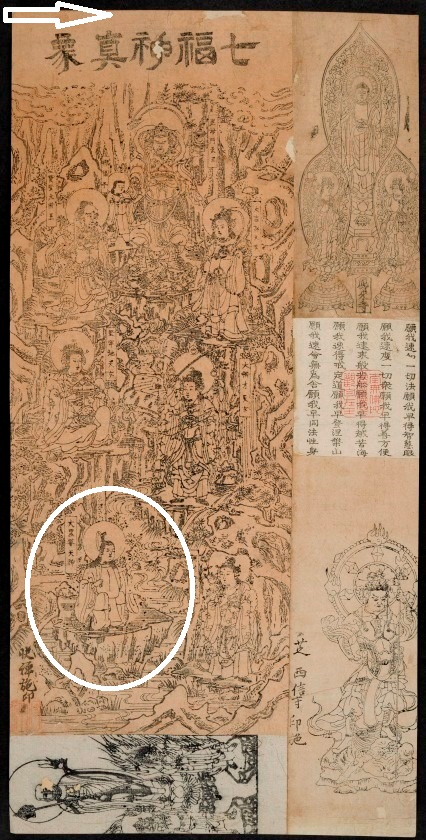 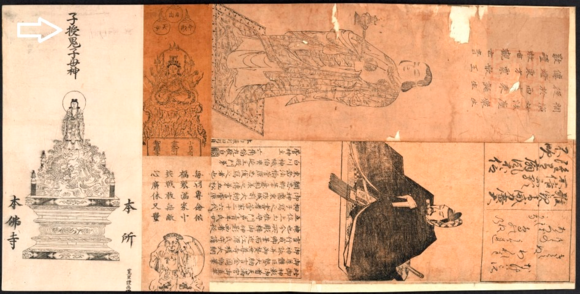 Items such as Ofuda and other types of talismans and amulets reflect fundamental human concerns about the uncertainties of life. The Kansai-kan of the National Diet Library, Japan, recently held a display of items from their collections showing how people prayed for good things, what they were afraid of, and how their wishes were transformed into objects, such as amulets, talismans and incantation spells. 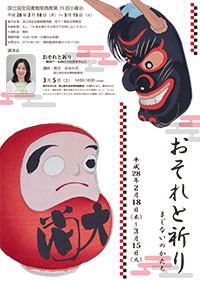 Osore to inori : majinai no katachi おそれと祈り : まじないのかたち, "Awe and prayer – the forms of incantation," The 19th Small Exhibition at the Kansai-Kan of National Diet Library, 18 February – 15 March 2016.

Incidentally, it was Lafcadio Hearn (1850–1904), the author of ‘Kwaidan: stories and studies of strange things’ who translated Botandōrō into English as ‘A Passion of Karma’ and collected Japanese Ofuda himself. Many of his Ofuda are now kept at the Pitt Rivers Museum in Oxford.

In the second part of this blog post, we will explore further Hearn’s ‘A Passion of Karma’ and his other work ‘Goblin Poetry’ in which he described ofuda-hagashi, and introduce a newly acquired deluxe facsimile version of Goblin Poetry, Yōma shiwa 妖魔詩話, published in 2002.

Posted by Annabel Gallop at 5:00 AM