The Sixteen Sacred Lands of Buddhism

Siddhartha Gautama, the founder of Buddhism, was brought up to become a king, but he left his life of great comfort after encountering the ‘four signs’: an old man, a sick man, a corpse, and an ascetic. After six years of hardship, working to find the right spiritual path, he attained his ‘Great Enlightenment’, and became the Buddha. During the following forty-five years of his mission until he passed into Mahaparinirvana (the state of reaching the end of suffering) at the age of eighty, the Buddha walked widely throughout the northern districts of India, delivering his teachings to the bhikkhus (Buddhist monks) and laity in the places that he visited. The sixteen lands where he spent time during his long ministry can often be found illustrated in Buddhist cosmology manuscripts. In this post we present nine such Burmese manuscripts held in the British Library, all illustrated in the Mandalay style and dating from the mid-19th century.  Eight are written on paper in folding-book (parabaik) format and these have all been digitised, and one is written on palmleaf.

Shown below is a depiction of the sixteen sacred lands in a Burmese folding-book paper manuscript, Or. 14004. The Buddha is seated in Bhumisparsa mudra (earth-touching posture) on a throne under the Bodhi tree at the centre. Around him are depicted the sixteen lands, with indications of the distances between the centre and each of these regions, varying from one day to two months of travel. The sixteen lands are labelled (clockwise from the top) Mithila, Sankassa, Jetuttara, Takkasila, Savatti, Kosambi, Kalinga, Mudu, Koliya, Kapilavastu, Campa, Varanasi, Rajagaha, Vesali, Pataliputta, and Pava. 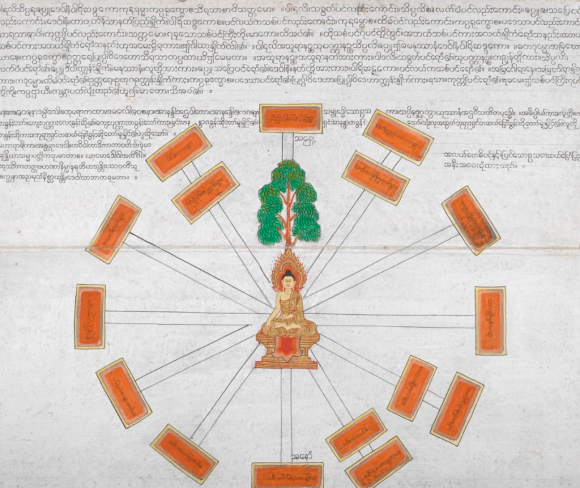 A similar illustration is shown below, drawn across four separate leaves of a Burmese palmleaf manuscript, Add. 17699A:

Described below are the Sixteen Sacred Lands in the order in which they were visited by the Buddha.

Jetuttara: Prince Vessantara (the Bodhisatta) was born in the capital city of Jetuttara.
Kalinga: When a severe drought occurred in the neighbouring kingdom of Kalinga, Vessantara fulfilled the Brahmins’ wish and presented his auspicious elephant.
Takkasila: This was the capital city of the Gandhara kingdom. Kings, Brahmins and other rich families sent their sons to Takkasila, a center of learning.
Varanasi: The Buddha went from Bodh Gaya to Isipatana, Varanasi, about five weeks after his enlightenment and spent the first rainy season there. The ordination of Yasa and his fifty-four friends took place during this retreat. The Buddha and his disciples travelled from place to place and taught his Dhamma. He spent a great part of his life at Varanasi preaching to the people. 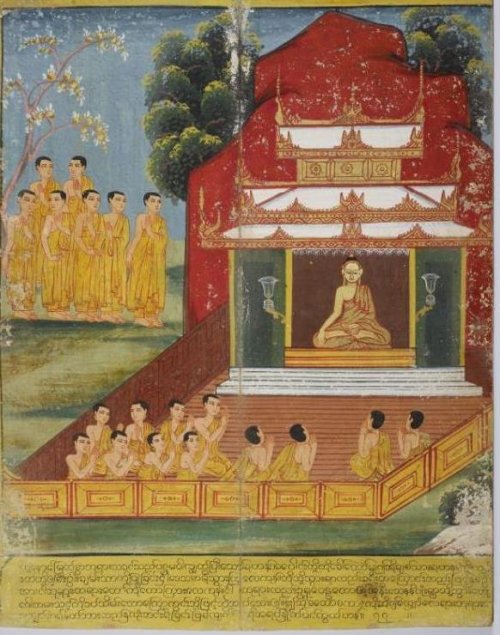 The Buddha at Varanasi in a Burmese manuscript. British Library, Or. 14553, f. 4

Rajagaha: During the time of the Buddha, the capital of the Kingdom of Magadha was ruled by King Bimbisara and later his son Ajatasattu. When the Buddha visited King Bimbisara in Rajagaha, Bimbisara offered his Bamboo Grove (Veluvana) to the Buddha and His disciples. The Buddha spent three rainy seasons (2nd, 3rd, and 4th) in this monastery.

Vesali: While the Buddha was staying at Rajagaha he informed King Bimbisara that he would pay a visit to Vesali. The king prepared a road for the Buddha. At the request of the Licchavi princes, the rulers of Vesali, the Buddha and his disciples went to Vesali and recited the Ratana Sutta discourse to purify the city, which was afflicted by plague. The Buddha at Vesali in a Burmese manuscript, from the Henry Burney collection. British Library, Or. 14298, f. 1.

Savatti: The Buddha accepted Anathapindika’s invitation to visit Savatti, the capital of Kosala. Here the novice Rahula received his higher ordination at the Jetavana monastery, which was donated to the Buddha by Anathapindika, a great merchant at Savatti. The Buddha spent twenty-five years in Savatti where he delivered many sermons. 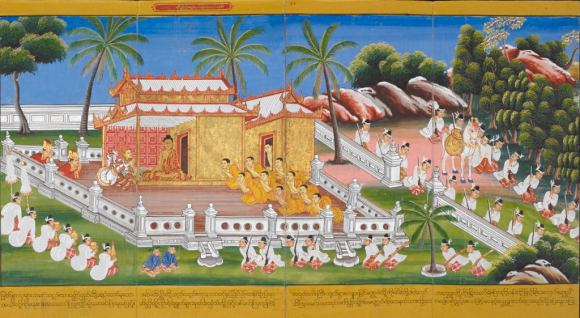 Sankassa: The Buddha descended to Sankassa from Tavatimsa accompanied by devas and brahmas. People of the city paid their homage to the Buddha. 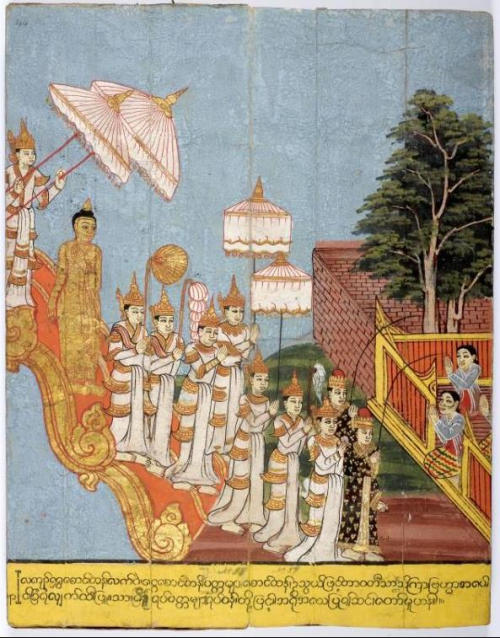 The Buddha descending to Sankassa in a Burmese manuscript from the Henry Burney collection. British Library, Or.14297, f.44.

Kosambi: The Buddha resided at the Ghosita Monastery in Kosambi and delivered his teachings to five hundred ascetics. The monastery was built by a rich man, Ghosita, for the Buddha and his disciples. While the Buddha was staying there, a dispute arose between some monks, and the Buddha departed alone from Kosambi. 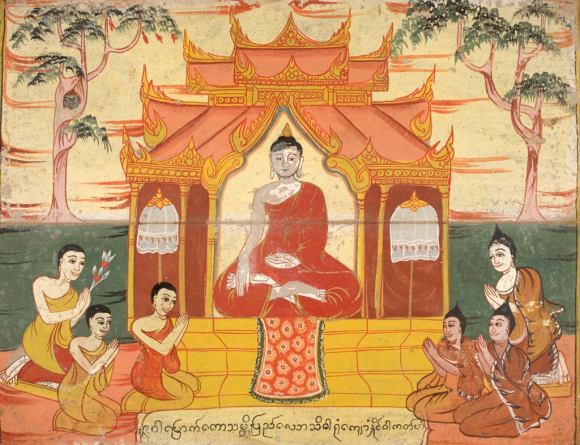 Kapilavastu: Siddhartha Gautama was raised and lived in Kapilavastu, the capital of the Sakya country, until the age of 29 when he renounced worldly life. After he attained enlightenment and became the Buddha he visited many places to preach the Dharma. He went back to Kapilavastu at the invitation of his father Suddhodana, and in the fifth year he visited his father again who was very ill. After his father’s death, his foster mother, Mahapajapati Gotami, who desired to be ordained, requested the Buddha to ordain her as a Bhikkhuni. Although the Buddha initially declined, with the intercession of Ananda, he later granted this wish. 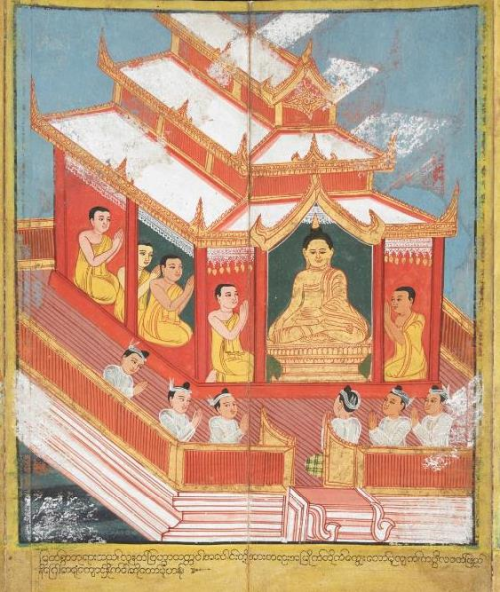 Koliya: When a quarrel arose between Kapilavastu and Koliya regarding the right to the waters of the river Rohini, the Buddha delivered a sermon of peace and advised them to live in harmony. The two rulers ended the long quarrel between them and peace was restored, and young men from both tribes entered Buddhist orders.
Mithila: The Buddha stayed at Mithila and preached the Makhadeva and Brahmayu suttas. Vasitthi, a theri (nun), entered the Order after listening to his teaching.
Campa: The Buddha with a large company of bhikkhus went to Campa on several occasions and dwelt there on the banks of the Gaggara, a lotus pond.
Pattaliputta: When Gautama Buddha and his disciples visited many villages near the Ganges River they passed through Pataliputta, the new capital of Magadha, built by King Ajatasattu, the second of the Magadha kings.
Mudu:  Mudu is listed in the diagram as one of the sixteen sacred lands, but little is known about it.
Pava: When the Buddha came to Pava, a city of the Mallas near Kusinara, and stayed in a mango grove, Cunda, the blacksmith invited the Buddha and his disciples to a meal. After the meal Buddha fell ill on his way to Kusinara on the same day. The Buddha gave his last teaching to the monks as he took a rest under the Sal trees. Then he entered Mahaparinirvana (reaching the end of suffering). 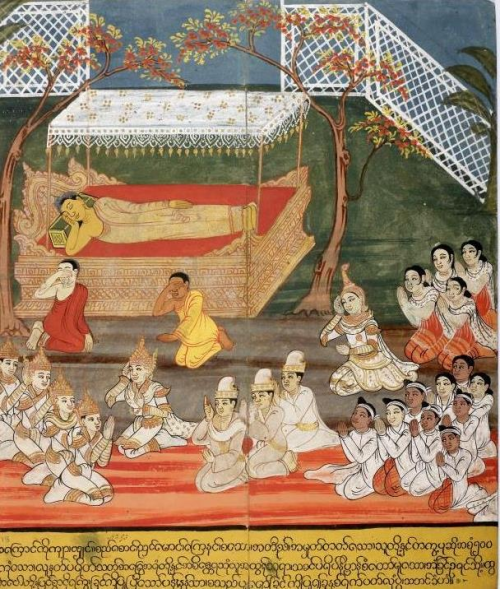 The Buddha in Mahaparinirvana (reaching the end of suffering) at Pava. British Library, Or. 14298, f.18.

Posted by Annabel Gallop at 5:13 AM