Iron gall ink has been used since the middle-ages and is found on many of our most treasured collections including the Lindisfarne Gospels, Beowulf and the Magna Carta. As we read in our last post about conserving a mould-damaged iron gall ink manuscript, the main ingredients of iron gall ink include iron sulphate, tannins from oak galls and water. But what exactly are these ingredients and what have parasitic wasps got to do with it? Head of Conservation Science and Research Dr Barry Knight shares his observations.

I was brought up in Sussex, on the chalk downs. You can sometimes find nodules of iron pyrites, FeS2, that have weathered out of the chalk. When I was at school they were called thunderbolts, because nobody knew what they were. Figure 1 shows a whole nodule compared to one that has been broken to show its internal crystalline structure. The whole nodule is about the size and colour (but not flavour!) of a Scotch egg.

The connection with iron gall ink is that these nodules used to be collected from the foreshore, in places like Whitstable, where they had weathered out of the cliffs. They were crushed and put into huge tanks, where, over a period of two or three years, they slowly oxidised to form iron (II) sulphate and sulphuric acid. The liquid was run off and scrap iron was added - this had three functions:

1. It neutralised the sulphuric acid, forming more FeSO4
2. It reduced any iron (III) to iron (II)
3. It would precipitate any less reactive metals (such as copper) from solution

The overall effect was to make a purer solution of FeSO4. The solution was then boiled to concentrate it until crystals of FeSO4 formed, otherwise known as green vitriol or copperas. This was used primarily for dyeing leather black (by reaction with the tannins in the leather), and in a much less important way for making ink.

I once found a nodule on the beach - it was about the size of a cricket ball, and had been worn almost smooth by the action of the waves. Being that sort of boy, I took it home and put it in a wooden box. Some time later, when I came to look at it, it had swelled up and disintegrated; there was a strong smell of sulphur and the wood was stained black. The nodule had obviously oxidised and the iron (II) produced had reacted with the tannin in the wood.

About 40 years later I became interested in iron gall ink, and I tried to repeat this experiment. I had some fragments of a pyritic nodule which I crushed and put into a beaker of deionised water. After a few weeks the liquid was definitely greenish, and as the water evaporated crystals formed. However, after two years the reaction has not proceeded very far. There is still a lot of grey sludge in the bottom of the beaker - unreacted pyrite - which is basically unchanged. I do wonder whether the salt in the sea water was responsible for the rapid reaction of my nodule - chloride ion does generally enhance the rate of corrosion, so I wonder whether my bench experiment would be more successful if I added a bit of NaCl to it.

The other main ingredient of iron gall ink is gallic acid, which comes not from France but from oak galls. The gallic acid was extracted by grinding up the galls and soaking them in hot water.

I now know a lot more than I wanted to about oak galls and gall wasps! I had always referred to oak galls as "oak apples", but I now learn from the Wikipedia entry "Oak apple" that the true oak apple is more apple-sized, up to 5cm diameter. The things I collected as a child (and still do, for purely scientific purposes!) are called "oak marble galls", and are only about 1.5cm dia.

In the summer I collected some marble galls from oak trees near St Albans; I took them home and put them in a paper bag. Later, when I looked in the bag, I found that the gall wasps had hatched out. On closer examination, I discovered there were two sorts of wasp, one larger and one smaller. It turns out that the larger one is the true gall wasp (Andricus kollari); the smaller one is a parasite that either lives on the material of the gall, or actually eats the larva of the gall wasp. You probably didn't want to know that. See the Wikipedia entry "Andricus kollari". 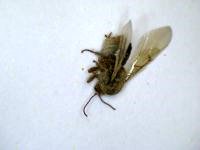 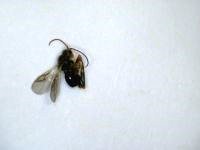 I also collected some quite differently shaped galls from oak trees in another place near St Albans. They are green and shiny with excrescences, and it would seem from Wikipedia that they are called Knopper galls, and are caused by a different insect called Andricus quercuscalicis. 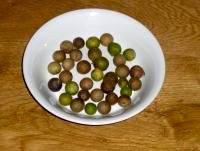 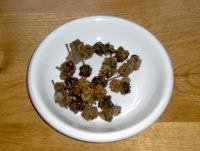 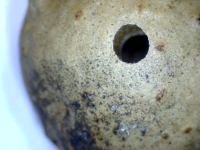 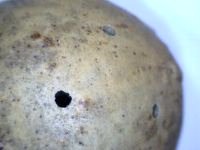 Posted by Christina Duffy at 10:08 AM