Discovery of a watermark on the St Cuthbert Gospel

A watermark of a post horn surrounded by a shield was recently discovered on the rear pastedown of the St Cuthbert Gospel (Add. MS 89000). The finding has just been published in the Electronic British Library Journal. The St Cuthbert Gospel is a late seventh century parchment volume and is the oldest intact European book. This Anglo-Saxon pocket gospel belonged to St Cuthbert of Lindisfarne (c. 635–687) and was discovered in 1104 in his tomb.

The pastedown, which is the endpaper attached to the inside cover board of a book, records the donation of the St Cuthbert Gospel (then known as the Stonyhurst Gospel) to the British Province of the Society of Jesus from the Reverend Thomas Philips, S. J. in 1769. 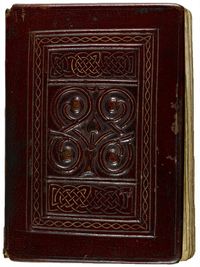 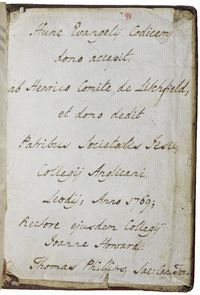 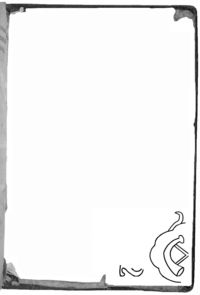 Left: Front cover of the St Cuthbert Gospel. Centre: The rear pastedown showing a record of the donation: ‘Hunc Evangelii Codicem dono accepit ab Henrico Comite de Litchfield, et dono dedit Patribus Societatis Iesu, Collegii Anglicani, Leodii, Anno 1769; rectore eiusdem Collegii Ioanne Howard: Thomas Phillips Sac. Can. Ton.’ which translates to: ‘This Gospel Book was received as a gift from Henry, Earl of Litchfield, and given to the Fathers of the Society of Jesus, of the English College, Liège, in the year 1769, the rector of the college, John Howard, Thomas Phillips Canon of Tongres.’ Right: The watermark is located in the lower right hand corner

Watermarks are created by manipulating a piece of wire into a recognisable shape and fixing it to a paper mould such as the Japanese papermaking bamboo screen below.  Here the bamboo has been cut into strips and arranged into parallel lines called laid lines. The bamboo strips are held together by sewing thread at one inch intervals, which form the chain lines on a sheet of paper. Chain lines, laid lines and watermarks are visible when held up to a light source. Light can pass through watermarks easily because the paper thickness is reduced where wire is present in the mould. 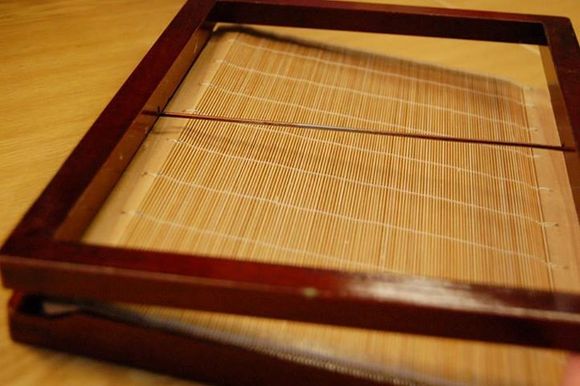 We typically notice watermarks on paper when they are held up to the light revealing a motif, initials or a date relating to the original paper mill. Watermarks are therefore useful in determining the provenance of paper and can help to identify its intended function. Watermarks can be difficult to image because they are often obscured by print on the page, or are located in the gutter (the space between the printed area and the binding).

An example of a partial watermark from a woodblock reprint dating to about 1476 is shown below. The reprint is of the Astronomical Calendar first published by Johann Müller (Regiomontanus) in Nuremberg in 1474 (British Library shelfmark IA.7). The watermark is found in the gutter with the other half located several folios later due to the ordering and cutting of the folios. 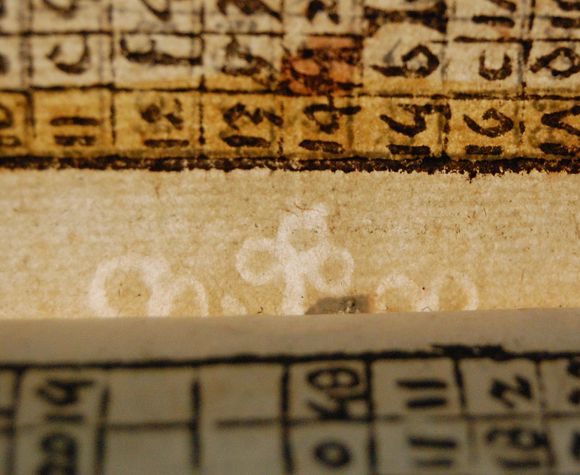 Watermark in the gutter of BL IA.7 when viewed through a light sheet

When the page is adhered to a board on one side, such as the rear pastedown of the St Cuthbert Gospel, it is impossible for light to transmit and watermarks can remain undetected. A pastedown conceals the raw edges of the covering material and forms a hinge between the board and the text block. 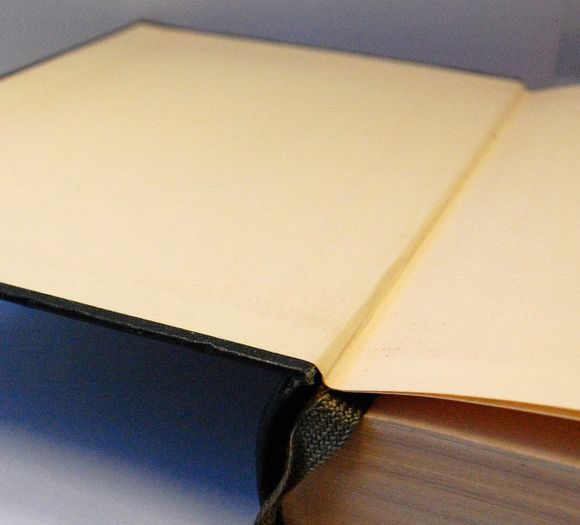 An example of a front pastedown where one side of the endpaper is adhered to the front cover. Since the endpaper is fixed to the board it is difficult for light to penetrate and illuminate potential watermarks

A high resolution digital image of the pastedown was processed using ImageJ, an open source image processing software package. An image is comprised of a variety of layers or textures which can be separated. This allows pixels of interest to be isolated which may include faded writing, obscured text or watermarks. The watermark was revealed by converting the image from the standard RGB (red green blue) colour space into another space where tiny contrast differences were enhanced. The process of colour space analysis is fully explained in the publication: The Discovery of a Watermark on the St Cuthbert Gospel using Colour Space Analysis 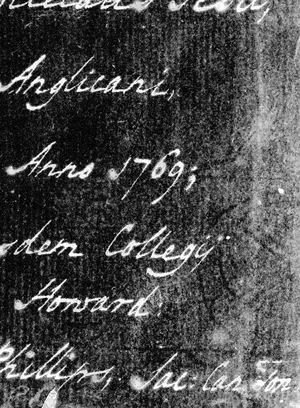 Left: An image of the rear pastedown of the St Cuthbert Gospel where no watermark is observed. Right: The same image reveals a watermark in the lower right hand corner of the pastedown when processed into another colour space

Colour space analysis is being used at the British Library to enhance faded designs on binding covers, disclose watermarks and hidden inscriptions and to reveal text which has been chemically treated or erased. In many cases applying colour space analysis to certain multispectral images has proven successful.

Digitisation projects generate large amounts of high-resolution images which can be manipulated to discover hidden information without the need to access the item. This has significant implications for the long-term study and preservation of cultural heritage collection items. The rear pastedown in the St Cuthbert Gospel was formerly numbered f. 91 and is available to view on the internet as part of the Digitised Manuscripts website.

Posted by Christina Duffy at 4:19 PM