A Calendar Page for January 2012

For a further discussion of medieval calendars (and our previous calendar from the Isabella Breviary), please see the post for January of 2011.

Our next series of medieval calendar images comes from Additional 18852, the Hours of Joanna of Castile (or if you prefer, the Hours of Joanna the Mad), which is currently on display in the British Library’s Treasures Gallery.  This small and exquisite Book of Hours was produced for Joanna of Castile, the daughter of King Ferdinand of Aragon and Isabella of Castile.  In 1496 Joanna married Philip the Handsome (or Philip the Fair), son of the Holy Roman Emperor Maximilian, and as both her arms and those of Philip appear throughout the manuscript, it must have been created between the time of their marriage and that of Philip’s death in 1506. 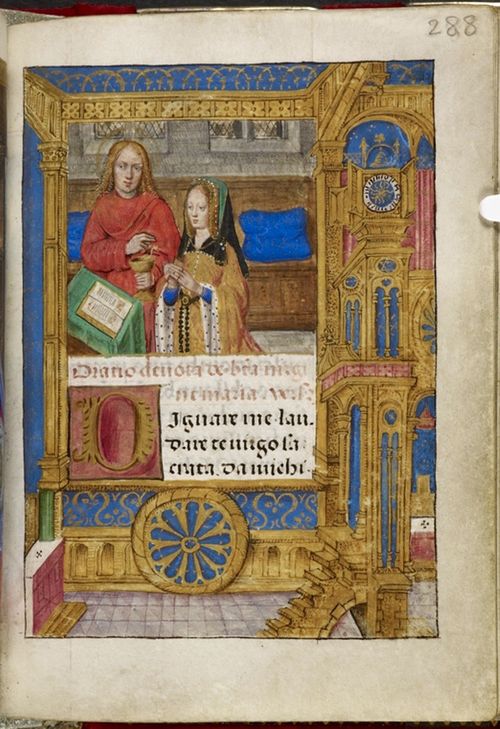 This manuscript was clearly customized quite carefully for Joanna of Castile; there are some texts that are unusual for a Book of Hours which were likely chosen directly by her.  The subject matter of many of the illuminations reflects her religious and artistic interests, and she also appears in two miniatures, including the one above, in which she is being presented to the Virgin and Child by St John the Evangelist.

The Book of Hours begins with a calendar, with the entry for each month spread across two folios.  The listings of saints days and feast days are surrounded by intricate miniatures depicting a variety of labours for each month. 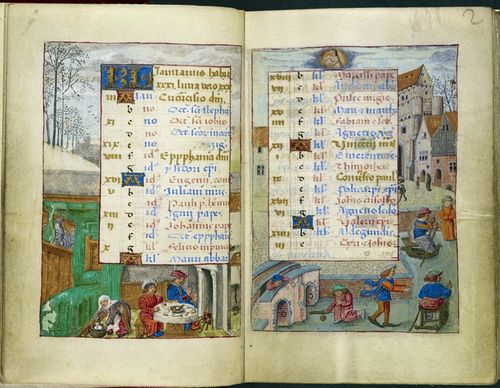 The first folio of the January opening contains a miniature of two nobles engaged in January’s standard ‘labours’ of warming oneself by a fire, and feasting on rich food.  Nearby a servant woman is at work beside a canopied bed.  At the top of the facing folio is a small painting of Aquarius as a nude man with a pitcher of water.  Below is a winter scene of people enjoying themselves on a frozen river, skating, sledging, and (our favourite) playing a ball game.