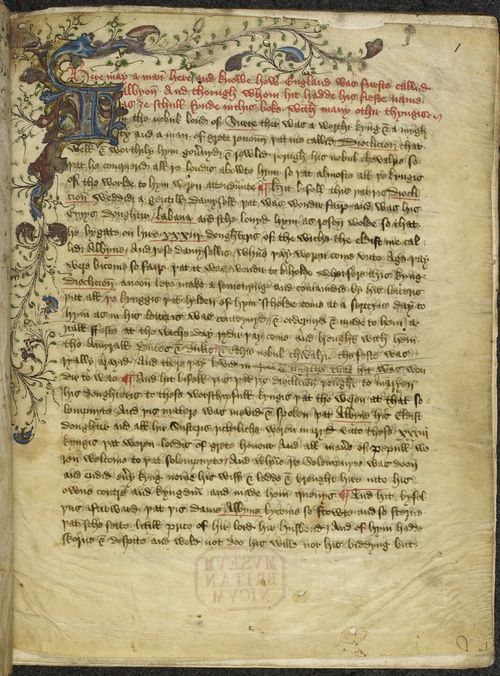 Decorated initial at the beginning of the English Prose Brut Chronicle: 'I n the nobul lande of Surre (Syria) ther was a worthi Kyng…', from The Prose Brut Chronicle of England (common version to 1430), England, 2nd or 3rd quarter of the 15th century, Harley MS 2256, f. 1r

In our recent post on the French Prose Brut, we promised a follow-up on the manuscripts of the English version.  There are 38 in the British Library, out of a total of 181 surviving manuscripts listed by the Middle English scholar, Lister M. Matheson of the University of Michigan.  A digital version of Matheson’s comprehensive study, The Prose ‘Brut’, The Development of a Middle English Chronicle is available online on the OpenLibrary website here.

It is not surprising that so many manuscripts survive, as the Brut chronicle was one of the most popular accounts of English history among the lay audience in the Middle Ages and in the early modern period. From the fifteenth century, it has been used as the standard account of English history and was the first chronicle of England to be printed by William Caxton (the Chronicles of England, 1480). In addition to the manuscript copies, there were 13 early printed editions. 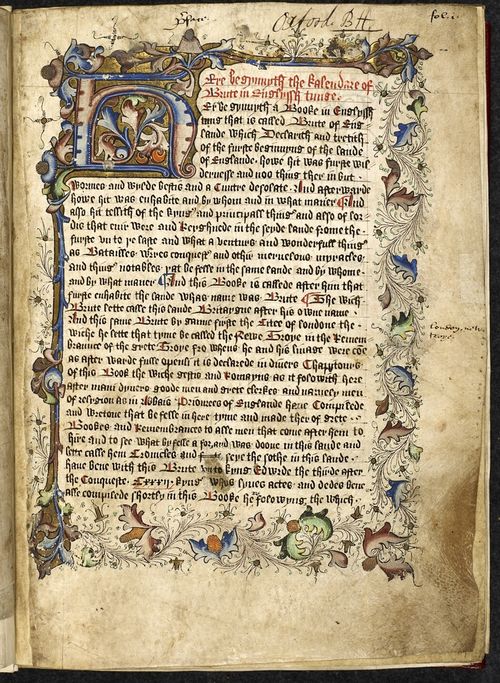 Decorated initial and border at the beginning of the Brut, with the title 'Here begynnyth the kalendare of Brute in Englysshe tunge', and the introduction: 'Here begynnyth a Booke in Englyssh tung that is called Brute of England which Declarith and tretith of the furste beginning of the lande of Englande. How hit was furst wildernesse and noo thing ther in but wormes and wylde bestes and a cuntre desolate. And afterward how hit was inhabite and by whom and in what manere.' From The Prose Brut (Chronicle of England), England, 2nd or 2rd quarter of the 15th century, Harley MS 24, f. 1r

The original Middle English version of the chronicle is based on the Anglo Norman French text, (see French Prose Brut Chronicles in the British Library and How to Find Them) and is believed to have been produced between 1380 and 1400.  Harley MS 3945 contains the earliest version to 1333, known as the common text.  It is a 15th century manuscript and is described in the British Library Search our Catalogue: Archives and Manuscripts.

The Common Text begins with the mythical origins of the English and ending with the Battle of Halidon Hill in 1333, where the Scots were defeated by the army of Edward III. 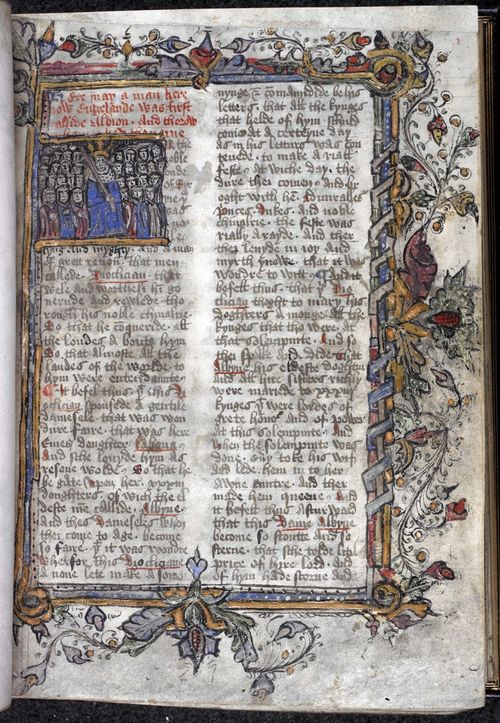 Historiated initial of Diocletian and his daughters, with the chronicle beginning: 'In the noble land of Syrie th[er] was a noble kyng and mighty and a man of grett reno[u]n that men called Dioclitian'.  The story continues with the 33 daughters of Diocletian, the eldest named Albyne (Albina), who murdered their husbands and were set adrift at sea before they landed on an island, which they named Albion. From the Prose Brut Chronicle of England, England, 2nd or 3rd quarter of the 15th century, Harley MS 1568, f. 1

The chronicle was amended and updated during the 14th and 15th centuries, with the first continuation taking it up to the death of Edward III in 1377, an addition associated with the chroniclers of Westminster. One of the British Library manuscripts containing this text to 1377 is Stowe MS 68, which is described with images in the Catalogue of Illuminated Manuscripts here. 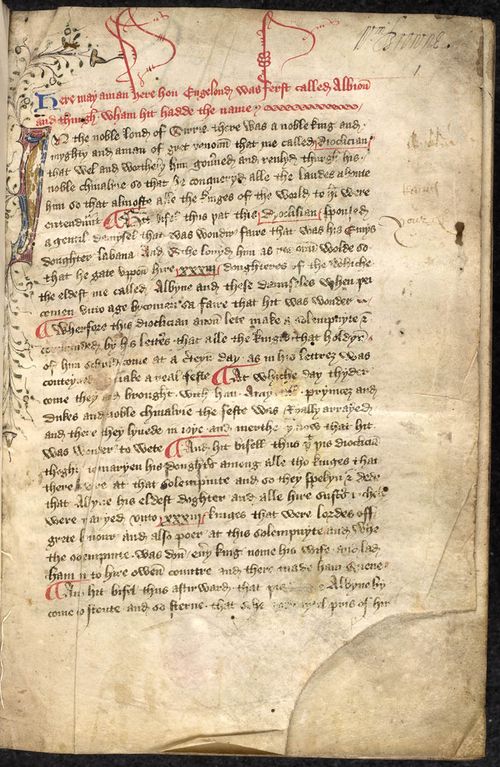 A champ initial and decorative border marking the familiar opening chapter of the chronicle, from The Brut Chronicle, England, 2nd or 3rd quarter of the 15th century, Stowe MS 68, f. 1

The chronicle to 1377 was then updated in some versions to 1419, taking events from the death of Edward III to the siege of Rouen, with the majority ending, 'and manfully countered with our English men'. One of the manuscripts of this version is Harley MS 1568, which contains the picture of Diocletian and his daughters above.  The catalogue entry can be viewed here.

The continuation to 1419 is found in Harley MS 7333, which is believed to have been copied in the mid-15th century by the amateur scribe John Shirley of Leicester, and which also contains Chaucer’s Canterbury Tales, part of Gower’s Confessio Amantis and Lydgate's Life of Saints Edmund and Fremund. 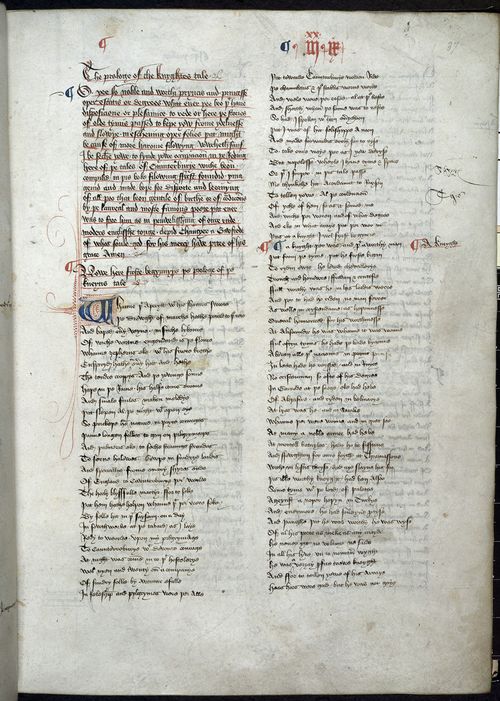 A passage from The Canterbury Tales, which follows the Brut Chronicle, England (Leicester), 2nd or 3rd quarter of the 15th century, Harley MS 7333, f. 37r

The final extension is to 1461, the accession of Edward IV, found in British Library Additional MS 10099, a paper manuscript of the late 15th century, under the title 'A breve tretise compiled for to bringe the people oute of doute, that han not herd of the Cronycles and of the lineal descensse unto the crownes of Englande, of Fraunce, of Castel Legiouns, and unto the Duchie of Normandie, sith it was first conquest and made'. It also contains Higden's Polychronicon and a text entitled Doctrina Sana (Rules for healthy living). See the catalogue entry online here.

The relationships of the texts and continuations are extremely complicated, and Matheson classified them into  four groups, the Common text, the Extended Version, the Abbreviated version and a looser grouping which he called the Peculiar Version, which includes a translation from the French Brut by John Mandeville (British Library MS Harley 4690 contains this translation).  Records show that they were owned by religious houses, aristocratic families, and merchants, from London to Yorkshire to Wales.

In the second half of the fifteenth century, the chronicles were spread to an even wider audience as they were used by Jean de Wavrin as the basis of his Recueil des Croniques d’Engleterre  which he composed for the Burgundian court, allies of the English. 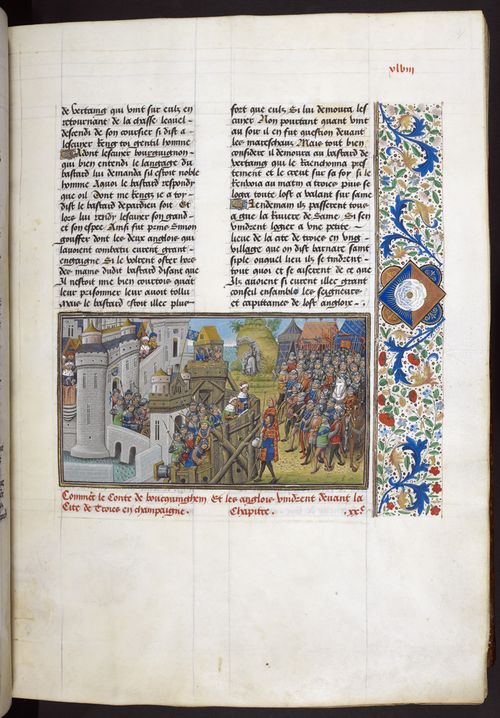 Great post! Do you know of any modern published editions of the fifteenth century continuations?