The Death of King John

King John of England (1199–1216), of Magna Carta fame, was by all accounts a particularly unpleasant ruler. The charges levelled against him, many of them during his own lifetime, included the murder of his nephew, the sexual predation of the wives and daughters of his nobles, and the starving to death of the wife and children of one of his former companions. So unpopular was John that his barons finally rose up in rebellion against his arbitrary rule, and against the severe punishments often inflicted upon them, until they eventually forced the king to grant them the Charter of Liberties, also known as Magna Carta, at Runnymede on 15 June 1215. Few can have lamented King John's eventual demise at Newark Castle — most probably following an attack of dysentery —in October 1216. Writing some 40 years later, Matthew Paris (d. 1259), monk and historian of St Albans Abbey, delivered the ultimate condemnation: 'Foul as it is, Hell itself is made fouler by the presence of John'.

Today may, or may not, be the anniversary of King John's death. The medieval chroniclers could not reach consensus on the exact date that John died. Matthew Paris and his St Albans' predecessor, Roger of Wendover (d. 1236), plumped for 17 October. Ralph (d. 1226), abbot of the Cistercian monastery at Coggeshall (Essex), stated instead that King John had succumbed to his illness on 18 October. A number of monastic chroniclers, writing at Tewkesbury, Winchester, Worcester and elsewhere, favoured 19 October as the day in question. Of these various witnesses, we should perhaps give greatest credence to the anonymous chroniclers writing at Waverley Abbey (Surrey) and Southwark Priory (Surrey), both of whom asserted that the death of King John took place on 19 October. The manuscripts of these two chronicles (Waverley, British Library Cotton MS Vespasian A XVI; Southwark, British Library Cotton MS Faustina A VIII) were both being written in the year 1216, as evidenced by their numerous changes of scribe at this period. The same is also true, however, of Ralph of Coggeshall's Chronicon Anglicanum (the autograph manuscript of which is British Library Cotton MS Vespasian D X). Roger of Wendover and Matthew Paris, in contrast, were writing many years after the events being described, and so their testimony — albeit possibly derived from an authentic St Albans tradition — is more open to question. 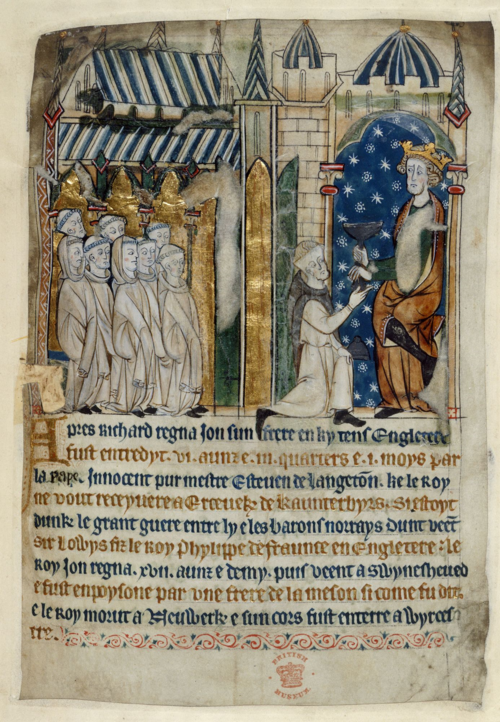 Is this how King John met his fate? As early as the 13th century, it was alleged that he had been poisoned by a monk of Swineshead Abbey (Lincolnshire), seen here offering him a poisoned chalice (London, British Library, Cotton MS Vitellius A XIII, f. 5v).

Earlier in his reign, King John had determined that he should be buried at the Cistercian abbey he had founded at Beaulieu (Hampshire). In October 1216, Beaulieu lay in that part of England which was held by the rebel barons; and so John asked instead that he be buried at Worcester Cathedral, where his tomb can still be seen. In fact, the tomb was opened in 1797, in order to confirm whether it did contain John's body, and certain of the remains removed, which are also on view in Worcester. Mr Sandford, a local surgeon, inspected the skeleton, and reported that King John stood 5 ft 6½ in. (approximately 1.69 m) tall. Unlike one of his successors, Richard III, John was clearly not buried under a carpark.

Next February, the four surviving manuscripts of King John's Magna Carta will be brought together at the British Library for the first time in 800 years. A ballot is currently being held to give 1,215 lucky winners the chance to see all four manuscripts side-by-side. The ballot closes on 31 October: don't forget to enter for your chance to take part in this moment of history! If you do miss out, you'll still be able to see the British Library's two 1215 Magna Carta manuscripts at our own major exhibition later in 2015: tickets are already on sale. And if you'd like to know more about the history of Magna Carta, take the chance to visit our new Learning webpages, which will be updated with more information next year.

Strangely enough, we doubt that King John would have been particularly amused by the modern-day celebrations planned for Magna Carta in 2015. Less than 10 weeks after that document had been granted in June 1215, Magna Carta was annulled by Pope Innocent III, at John's request, declaring it to be 'shameful and demeaning, illegal and unjust, and null and void of all validity for ever'. Just over a year later, a revised version of Magna Carta was issued in the name of John's son, King Henry III (1216–1272), and the rest is history. King John never did get the last laugh.

Poor John, he wasn't ALL bad - the Barons were more concerned for themselves, he funnily enough had more consideration for the populus at that point!
How can we judge him now - Matthew Paris was very vindictive but didn't know him. WE aren't living by Medieval standards anymore. I certainly think he was much better for Ebgland as King thn his brother Richard!