Between Manuscript and Print: Greek Manuscripts from the Circle of Aldus Manutius

The year 2015 marks the 500th anniversary of the death of Aldus Manutius, founder of the famous Aldine press at Venice. A wide range of activities are taking place worldwide to commemorate the occasion, including a free exhibition in the Sir John Ritblat Treasures Gallery at the British Library, entitled “Collecting the Renaissance: the Aldine Press 1494-1598”. 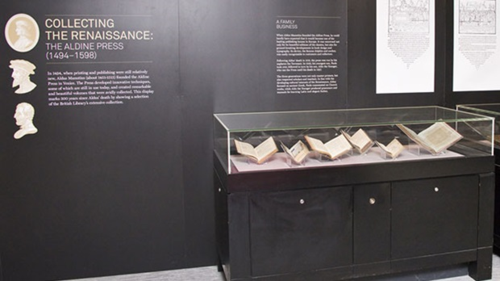 Collecting the Renaissance: The Aldine Press (1494-1598), on display in the Sir John Ritblat Treasures Gallery at the British Library

Aldus’ pivotal role in the early history of the printed book is well known. For scholars of Greek literature, he deserves special thanks. Early attempts to set Greek type had proved difficult, and demand for printed books in Greek was low. While Aldus was not the first to print Greek books, he certainly was the first to do so on a large scale. Most of the principal classical Greek authors were first set in type by the Aldine press.

The texts themselves were edited by a large group of scholars, many of Cretan origin. Aldus formed a club of Greek scholars, called the Neakademia (the New Academy), at which only Greek could be spoken. The great numbers of Greek manuscripts that can be attributed, with some confidence, to Venice at the end of the 15th and beginning of the 16th century are at least partly a result of the efforts of Aldus Manutius. 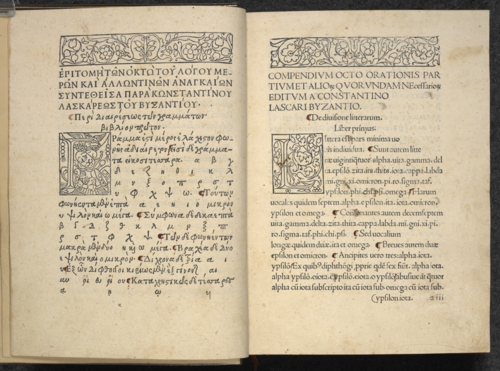 The first edition published in Greek by the Aldine press was the grammar of Constantine Lascaris, a fifteenth-century Greek scholar who, like many other Greeks, came to Italy in the wake of the fall of Constantinople in 1453. 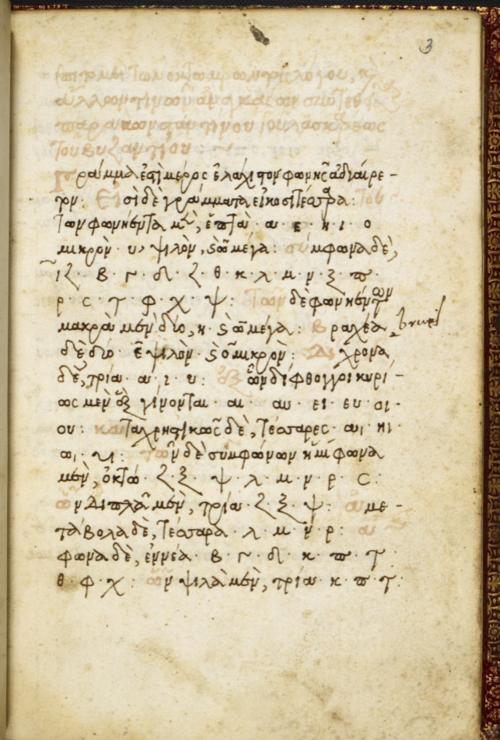 Harley MS 5741, f 3r. Constantine Lascaris, Erotemata, copied in Italy by George Alexandrou, at the end of the 15th century

A manuscript of part of the work dating from around the same time is now preserved in the British Library, copied by the scribe George Alexandrou, possibly at Rome. Though the manuscript cannot be linked with Manutius' circle, it nonetheless provides us with a fascinating juxtaposition of manuscript and print in the late fifteenth century. 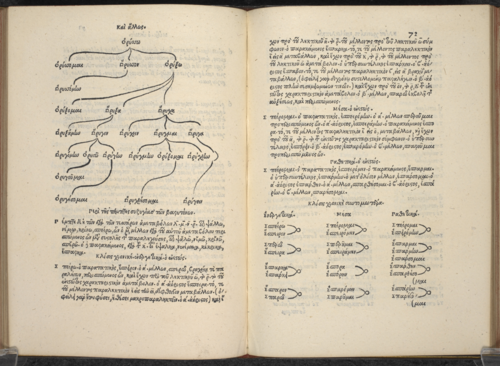 The British Library holds one of the great collections of Aldine books in the world. It also holds a number of manuscripts that can be attributed to scribes and scholars from the Aldine circle. Of course, as scribes often moved around, and worked on a variety of projects, we should be cautious of making the leap from ascribing a manuscript to an individual scribe, to localising it in the context of the Aldine press. Nonetheless, the manuscripts and scribes listed below attest to the vibrant scholarly culture in northern Italy, and in Venice in particular, at the turn of the 16th century.

A note: not all of these manuscripts have been digitised at the time of writing (December 2014), but this post will be updated periodically as the Greek Manuscripts digitisation project continues.

Some Greek scribes known to have associated with Aldus Manutius 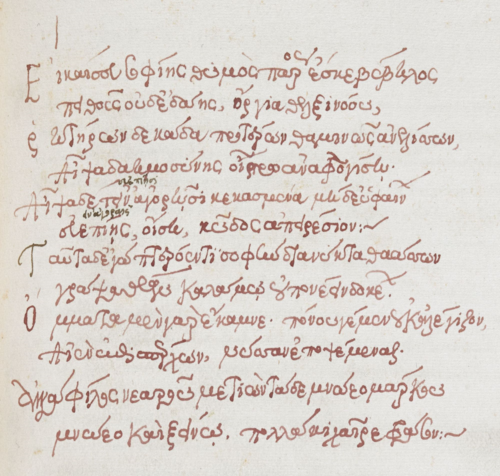 Marcus Musurus (b. c. 1470, d. 1517). By far the most important of Aldus’ Greek collaborators, Musurus was a Cretan scholar who subsequently worked with John Lascaris. His hand can be seen in Harley MS 5577, a manuscript of Dionysius Periegetes and Eustathius, and above all in Burney MS 96, a manuscript of the Minor Attic Orators completed at Florence in the early 1490s, to which Musurus appended a set of verses.

George Moschus, of Corfu, worked as a corrector at the Aldine press. His hand is to be found in part of Add MS 11890, a collaborative set of scholia on Oppian’s Halieutica, in the margins of the first seven folios of Harley MS 5611, works on Galen (not yet digitised), and the entirety of Burney MS 110, Zenobius’ Epitome.

Johannes Cuno (b. 1462/3, d. 1513), Dominican monk and German humanist. Cuno spent time in Venice in the 1490s and worked closely with Aldus. Arundel MS 550 (not yet digitised) is Cuno’s own notebook relating to Greek materials.

Burney MS 62, f 2r, detail. Beginning of the Argonautica of Apollonius of Rhodes, copied by the scribe known as the Anonymus Harvardianus

Anonymus Harvardianus. So named after a manuscript at the Houghton Library, Harvard (MS Gr 17), where the hand was first identified, the work of this scribe can be seen in many manuscripts with links to the Aldine press, including Burney MS 62, containing Apollonius of Rhodes’ Argonautica with scholia, vitae, and epigrams.

Zacharias Calliergis (b. before 1473, d. after 1524), of Crete. Responsible in part for Royal MS 16 C XXIV, a manuscript of Athenaeus’ Depinosophistae. His hand can also be seen on the outer bifolium of a quire in Harley MS 1814, now ff 1r-v and 8r-v (the text is Dionysius Periegetes).

“Collecting the Renaissance: the Aldine Press 1494-1598” will be on display in the Sir John Ritblat Treasures Gallery until 25 January 2015.