War and peace in Britten

This is the second of our posts highlighting some of the themes of the British Library exhibition Poetry in Sound: the Music of Benjamin Britten. Today, Britten's pacifism comes under the spotlight.

Britten developed an anti-war stance well before the outbreak of World War II, involving himself with the Peace Pledge Union in the 1930s. The Union was formed in 1934 by Dick Sheppard, a popular Anglican priest, in response to the growing threat of war in Europe. It quickly became one of the most prominent organisations in Britain committed to peace, commanding the support of many writers and thinkers, including Aldous Huxley, Bertrand Russell and Siegfried Sassoon. Britten and Michael Tippett were among the musicians attracted to its cause. During World War II, the Peace Pledge Union published booklets and leaflets encouraging people to shun the war and become conscientious objectors. This flyer was issued in about 1939. 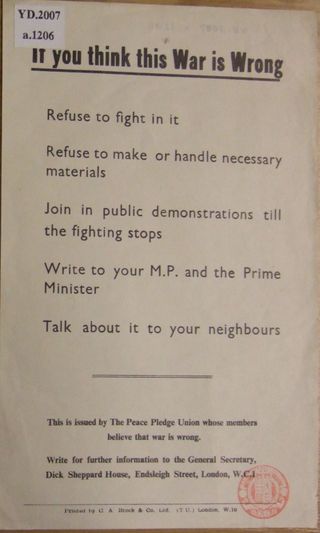 Britten composed a marching song, Pacifist March, for the Peace Pledge Union. It appears to have been modelled on the political propaganda songs popular in mainland Europe. Britten intended it to be performed by two-part choir and orchestra but - although the words and music for the chorus were printed in 1937 - Peace Pledge Union members apparently disliked the piece, and it was quickly withdrawn. A rare surviving copy is on display in the exhibition. The words are by Ronald Duncan (1914-1982), author of a pamphlet entitled The Complete Pacifist. Duncan's lyrics begin with the lines 'Blood, mud and bitterness have been used in painting our history, That's been smudg'd with the stain of war. Empire we've stolen, swollen, Our imperial greed for more.'

In April 1939 a left-wing 'Festival of Music for the People' was held in London. It included a pageant for 500 singers and 100 dancers featuring the American singer Paul Robeson as soloist, a balalaika orchestra playing Russian tunes, music by the communist composer Alan Bush, and Britten's Ballad of Heroes. The Ballad, with words by W.H. Auden and Randall Swingler, was performed by 'Twelve Co-operative and Labour Choirs'. Britten had been horrified by the bloodshed of the Spanish Civil War and wrote: 'It seemed natural to choose a piece which could express my sympathy with the beleagured Spanish Republic and honour a brave, unhappy people'. 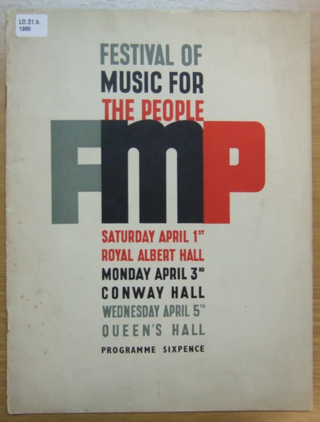 Britten left the UK for America just before the start of World War II, for which he was roundly criticised in the British press. An overwhelming longing for home led him back to England in 1942, where he faced a tribunal as a conscientious objector. In 1945, he gave two concerts with the violinist Yehudi Menuhin at the newly liberated Belsen concentration camp, an experience that would colour his later works.

The wartime destruction and subsequent rebuilding of Coventry Cathedral provided the impetus for Britten's War Requiem, which he composed for the reconsecration of the cathedral in 1962. In it the text of the Latin Mass of the Dead is interspersed with and transformed by the poetry of Wilfred Owen. Britten's powerful musical response to Owen's poems reflected his deep admiration for the poet. 'Owen is to me by far our greatest war poet, and one of the most original and touching poets of this century', he wrote.

Posted to France in 1916, Owen had returned to Britain in 1917, diagnosed with shell-shock. At hospital in Edinburgh he met fellow patient and poet Siegfried Sassoon, who later edited his works for publication. Owen wrote or revised most of his poems shortly before his return to France â€“ where he was killed days before the Armistice.

On display is Britten's draft manuscript of his War Requiem, alongside one of the Library's literary treasures, a manuscript of Owen's poems in the poet's own hand. We have chosen to display his poem 'Anthem for Doomed Youth', which Britten used in the War Requiem and which, in its published version, opens with the following lines:

What passing-bells for these who die as cattle?
Only the monstrous anger of the guns.
Only the stuttering riflesâ€™ rapid rattle
Can patter out their hasty orisons.

The manuscript on display is an early draft of the poem, bearing annotations in the hands of both Owen and Siegfried Sassoon. The manuscript reveals that Owen originally called the poem 'Anthem for Dead Youth'. 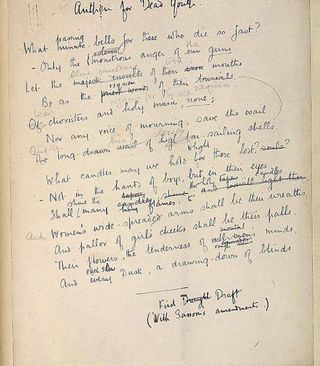 In our next exhibition-related post we'll be exploring the poems that inspired one of Britten's best-known works, his Serenade for Tenor, Horn and Strings.

Posted by Sandra Tuppen at 7:45 PM