Fishing from the Earliest Times: A very brief history

Our next TalkScience event will explore the impacts of fishing on the marine realm. But how long have humankind been fishing for food? Peter Spooner delves into the British Library collections to find out.

Anatomically modern humans (Homo sapiens sapiens) have been eating seafood for at least 164,000 years. Caves in South Africa contain the very earliest evidence for humans eating shellfish, as well as evidence for humans eating shallow-water fish 140,000 years ago1. However, complex fishing equipment probably did not arise until much later. For example, the oldest known fishing hooks come from a cave in East Timor, South-East Asia, dating to 40,000 years BC2. 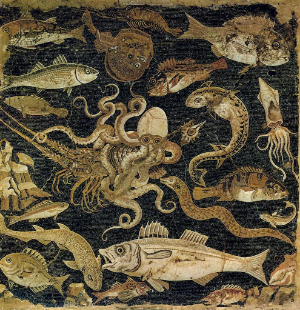 By the time of the ancient Egyptians, and  then the Greeks and Romans, fishing with all kinds of equipment was common. Passages  in the works of Homer (8th century BC)3 and whole volumes by other scholars including Pliny the Elder (1st century AD)4, Ovid (1st century BC to AD) and Oppian (2nd century AD)5 describe fishing methods and the natural history of marine animals6. The latter works explain in incredible detail the habits and habitats of many animals, with examples including the migrations of tuna and the cleverness of dolphins.

These texts also provide interesting insights into the early development of some controversial fishing practices. For example, passages in Oppian’s ‘Halleutica’ and Pliny’s ‘Natural History’ describe early fish aggregation devices (FADs), which usually involve floating an object in the sea. Fish are attracted to the object and gather around it. They can then be easily captured. Today this is a method which risks causing overfishing7. Ancient versions of the FAD technique included hanging baskets in the water, or men venturing out day after day and feeding the fish by a particular rock until so many fish had gathered that it was easy to pull them into the boat. Another story in Oppian describes the use of a poison – derived from cyclamen root – to drive fish into waiting nets. Today, the use of poisons such as cyanide in fishing is described by the United Nations as a ‘destructive’ fishing technique8. But there are other ancient passages which refer to a much more wonderful kind of fishing. 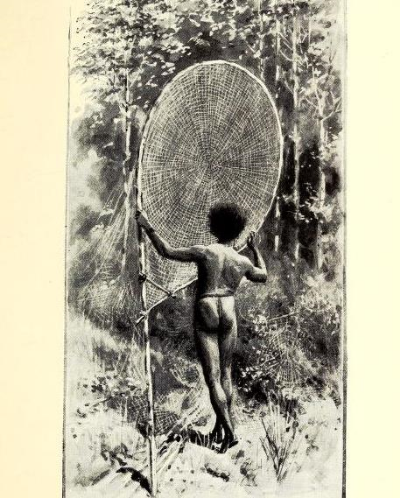 One fishing method recorded by both Oppian and Pliny seems almost too remarkable to be true. It was written that in certain towns, fishermen would wade out into the water carrying nets or spears in readiness. Then they would shout and wait until dolphins came in from the sea, and the dolphins would drive schools of fish into the shallows where they could be caught. The men would reward the dolphins with fish and, according to Pliny, bread mash dipped in wine! This incredible practice still exists today in Brazil (though not, as far as I know, the wine), and fishing with the help of tame animals – such as otters and cormorants – still occurs in Asia9 (see reference for videos).

Amongst other almost magical fishing methods, people in New Guinea have used spiders to spin fairy-like fishing nets10. By setting a wooden frame in an area where spiders lived, they could entice the spiders into creating nets of just the right shape and size. Spider silk has also been used for centuries in kite fishing, where the silk lure is dangled below a kite at the surface of the water11. 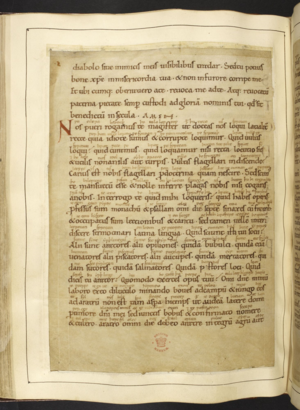 Compared to the ancient techniques  described above, modern industrial methods seem far more likely to result in unsustainable fishing. After all, how could a few hooks and nets pulled by hand or sailing boat catch enough fish to be a problem? Probably the earliest description of fishing in the English language is contained in the Colloquy of Ælfric12, a teaching manual for languages written in the late 10th or early 11th centuries. The description is in the form of a conversation between teacher and student, who is speaking in the role of a fisherman in England at the time. The teacher asks ‘Forhwi ne fixast þu on sæ?’: why don’t you fish at sea? The student replies lazily that it is too  far to row; he fishes in rivers instead13. But archaeologists have discovered that a major shift in English diet from freshwater fish to saltwater species was occurring almost as  this text was written. This shift has been linked to unsustainable management of freshwater systems, including the building of dams and the effects of farming on rivers14, and seems to be an early example of fishery expansion after local stocks collapsed. Given a few more years fishermen might have had to row the distance after all.

As illustrated by this example, sustainable fisheries management requires consideration of the whole ecosystem within which the fish live, as well as the needs of those who depend on the seas for their livelihood. Our next TalkScience event, ‘Fishing and marine protection: What’s the catch?’ will explore some of these issues. If you would like to be part of the discussion, tickets cost £5 and are available from our website.

9 Videos of each of these practices can be found here. http://www.bbc.co.uk/nature/humanplanetexplorer/survival_skills/fishing#p009j8f5

Posted by The Science Team at 8:55 AM