In the context of the military history of the East India Company, what would you imagine is meant by the term 'Minor cadets'?  Unmemorable junior officers who failed to distinguish themselves on any field of battle?  Wannabe soldiers who fell foul of an entry regulation concerning minimum height?

The term relates to a practice which flourished very briefly in India in the last quarter of the eighteenth century.  As a privilege and reward for loyal service, in August 1777 the Company decided to authorize the appointment of the sons of officers and surgeons to cadetships in its armies.  The Directors in London did not foresee quite how this would be interpreted, with a number of fathers having their male offspring marked down as cadets before they could even walk or talk.  Lt.Col. Thomas Higgins of the Bengal Army, for example, had his son Edward granted a cadetship on 1 September 1783 when the boy was sixteen days old; Major Thomas Whinyates followed his example on 23 November that year with his son George, who had been born on 31 August, following in the footsteps of Major William Sands, whose eldest son William was appointed on 18 April 1782 aged four months and twelve days. Surgeon John Stormonth and Lt. Col. William Tolly had their sons appointed several days before their baptisms, in 1782 and 1780 respectively.  Mr. Showers saw his sons Nathaniel and Samuel given cadetships on the same day, 20 March 1780, before either boy had reached the age of six. 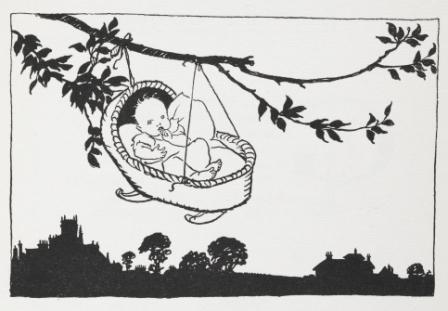 The names and brief personal details of no fewer than 116 such minor cadets are given in  V.C.P. Hodson's List of the officers of Bengal Army.  In many cases Hodson tells us what happened to the cadets when they reached adulthood.  Robert Achmuty, Henry Gahagan and Warren Jackson perhaps disappointed their fathers by choosing careers in the law, whereas Henry's elder brother Frederick became a writer in the Madras Civil Service. Charles Hampton opted for the less martial attraction of running an indigo works in Berhampore.  Others did embark on military careers - Thomas Gibson, Robert Kelly and John Maclean all entered the Madras Army, and Emilius Smith served in the British Army's 36th Regiment of Foot, dying of wounds in October 1801. 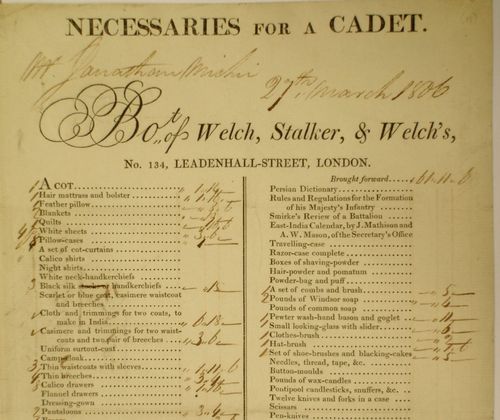 Possibly prompted by the establishment of the Board of Control in 1784 to rein in corruption in India,  the Company decided to reverse this aspect of its recruitment policy. Minutes dated 2 May 1786 stated:

We have hitherto as an indulgment to our Military Officers tolerated the appointment of their Infant Sons as Minor Cadets; but as We have great reason to believe this indulgence has been much abused and we are thereby put to great expense, We have come to the determination to put a stop thereto, and ... expressly forbid any such appointment in future ...

The pill was sweetened somewhat by the next sentence:

Whenever you wish to interest yourselves for the Sons of deserving Officers your recommendation of them to the Court of Directors will be properly attended to.

The closing of this loophole and the creation of the Board of Control did not end the favouritism embedded in the system as members of the Board as well as the Company Directors were permitted to nominate cadets until 1858, although the minimum age went up from fifteen to sixteen at the end of 1808.

Posted by Margaret.Makepeace at 8:56 AM