Everyone is badminton mad here!

In August 1873 a new sporting craze was sweeping through India in the form of badminton. Beatrice Aitchison, the wife of Sir Charles Umpherston Aitchison, Foreign Secretary to the Government of India) wrote to their family friend Lewis Pelly (Agent to the Governor-General at Rajputana, on special duty as Special Commissioner to Baroda) about the latest craze which she and her husband had taken up:
“We have even taken to it in a quiet way – we play by ourselves instead of going out to walk. It is good exercise and the Foreign Secretary thoroughly enjoys it”. In her letter to Pelly she describes how the sport has created quite a trade in the bazaar with the bats (racquets) being made by the locals and proving to be very popular but the difficulty was with the shuttlecocks as the locally made ones simply didn’t fly properly. Even her husband Sir Charles was quite enamoured with the sport, noting in a letter to Pelly that ‘my good old joints are getting supple from Badminton which I have been at length dragged into’. 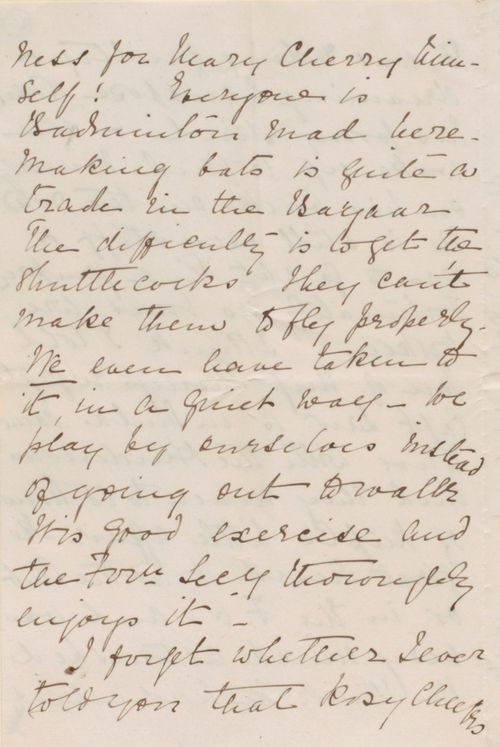 The craze for playing badminton recurs throughout the private papers collection of Sir Lewis Pelly, with correspondents writing to him throughout 1874 and 1875 and making reference to their fondness of the sport and the various matches that had been taking place.

One such match occurred in January 1875 and was between staff of the Government of India Foreign Office, including Aitchison, and staff of the Rajputana Agency which according to the descriptions to Pelly had resulted in a draw and had prompted one correspondence Adelbert Cecil Talbot to comment to Pelly about the Foreign Office team that

“We have a [ ] fair side and could I think play most others thanks to Mr Aitchison who is a very good player indeed”.

Even Lewis Pelly was not, it seemed, immune to the latest craze with Aitchison proposing in November 1873 a match between the two gentlemen and commenting that “I hope you won’t play the same tricks with my office as I played with yours”. Whether this match took place and whether any of the ‘tricks’ referred to were played we shall perhaps sadly never know.

Posted by Margaret.Makepeace at 09:00:00 in Domestic life , Leisure , Qatar