The two Malay manuscripts from Banjar presented here could not be more different in content and form: one a carefully-crafted court chronicle, presenting and perpetuating the public image of a Malay sultanate; the other a letter written hastily with no thought for posterity, and yet which nearly two centuries later vividly conveys some of the preoccupations of daily life in Kalimantan in the mid-19th century.

Hikayat Banjar is the dynastic chronicle of the most important kingdom on the south coast of the island of Borneo.  Its narrative, spanning the 15th to 17th centuries, relates the founding of the kingdom of Banjar, the rise of the ruling house, and its later conversion to Islam.  According to the text, the kingdom was founded by a merchant prince from India who comes to seek his fortune in Southeast Asia.  His newly-established court, modelled on the great Javanese kingdoms to the south across the Java sea, initially thrives on trade with China, but is eventually unsettled by the booming pepper market and its impact on the established social order in Banjar. 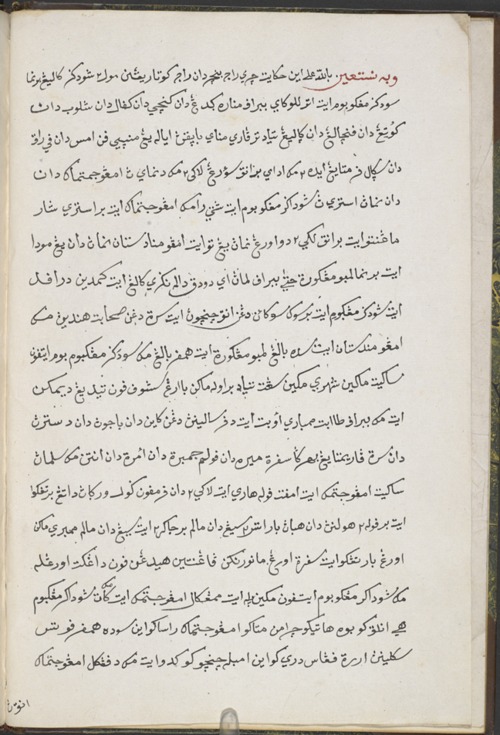 The first page of the Hikayat Banjar, which begins with the story of a rich merchant in India named Saudagar Mangkubumi, ancestor of the kings of Banjar.  British Library, Add.12392, f.2v.

The text of Hikayat Banjar was completed in or soon after 1663, but all surviving manuscripts date from the nineteenth century.  The British Library’s manuscript, Add.12392, which has just been digitised and can be read online here, is the earliest copy known of this work.  It was copied in 1816 for Thomas Stamford Raffles while he was Lieutenant-Governor of Java (1811-1816), through the assistance of Sultan Syarif Kasim of Pontianak (r.1808-1819), on the west coast of Borneo.  According to a note at the beginning of this manuscript, Raffles had asked the Sultan - who had previously sent him a Malay legal text and a copy of the Hikayat Iskandar Zulkarnain - to find him a manuscript of Hikayat Banjar.  Sultan Syarif Kasim had despatched a boat in search of the text, and a copy was finally located in the possession of the ruler of Kota Ringin in south Borneo, from which the present manuscript was copied.  But by the time the copy was completed Raffles had already left Java for Europe, and so Sultan Syarif Kasim writes that he is sending the manuscript to John Crawfurd, Resident of Yogyakarta in Java, in order that Crawfurd might convey it to Raffles in England.  Probably due to the scholarly rivalry between Crawfurd and Raffles – both were engaged in writing major works on the history of  the Malay archipelago – the manuscript was never delivered to Raffles, and in 1842 entered the British Museum along with Crawfurd’s other Malay manuscripts. 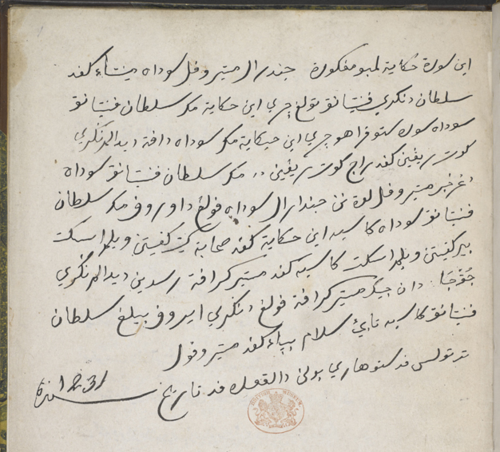 The second manuscript is a very brief letter, Or. 14537, dated 8 Zulhijah 1259 (30 December 1843).  It is from Haji Abdul Rahman, penghulu or chief of Banjarmasin, to two Dutch officials, asking for the return of wooden beams for the mosque, urgently needed before of the feast of Id al-Adha on the following Monday.  The single sheet of paper was then simply folded and then sealed shut, and the address written on the outside.  Haji Abdul Rahman writes his signature in fluent roman letters, suggesting he was literate in both Arabic and Latin script.  Why or how this letter - never intended to outlast its aim of retrieving the mosque beams - survived is not known, but we are glad to have it, as a rare example of a concise Indonesian 'memo' written nearly two hundred years ago. 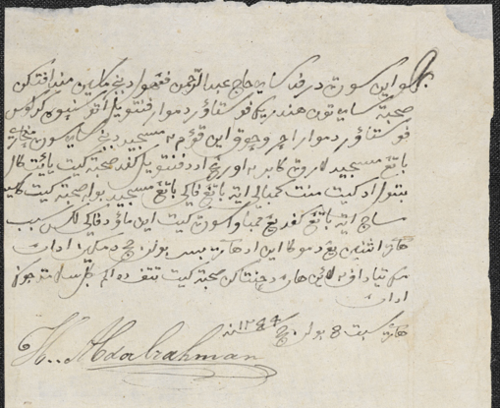 Text of the letter: Bahwa ini surat daripada saya Haji Abdul Rahman penghulu di Banjarmasin mendapatkan sahabat saya Tuan Hendrik postaur di Muara Pantuil atau Sennyur Karlus postaur di Muara Cerucuk. Ini kaum2 mesjid di Banjar saya sudah mencari batang mesjid larut kabar2 orang ada di Pantuil kepada sahabat kita, iaitu kalau betul ada kita minta kembali itu batang pakai batang mesjid boleh sahabat kita kasih saja itu batang kepada yang membawa surat kita ini mau dipakai lekas sebab hari isnin yang di muka ini ada hari besar bulan Haj demikian adanya. Maka tiada apa2 lain hanya dicintakan sahabat kita tetap di dalam segala selamat juga adanya. Hari Sabtu 8 bulan Haj sanat 1259. ‘This is a letter from me Haji Abdul Rahman, Penghulu of Banjarmasin, to my friend Tuan Hendrik, Posthouder of Muara Pantuil, or to Senor Carlos, Posthouder of Muara Cerucuk. My mosque congregation in Banjar has been searching for the beams from the old mosque, and some people say that these are in Pantuil with my friend; if this is true then we request that these be returned for use in the mosque, my friend may give the beams to the bearer of this letter, because we need them urgently as this coming Monday is the feastday of the month of Hajj. There is nothing more to add save my loving wishes that my friend may remain in all safety. Saturday 8th of the month of Hajj, the year 1259.’  British Library, Or. 14537 (detail).

Its greats, saya suka ini dan mungkin akan saya jadikan referensi untuk meneliti migrasi suku banjar di Jambi
[Transl: I like this and I hope to use it as a source to study the migration of Banjarese to Jambi]