Happy New Year, and Selamat Tahun Baru 2014 to all our readers in Southeast Asia.

For my first post of the year, I would like to ponder the question of why illuminated Malay manuscripts are so rare. Regular readers of this blog will have noticed that, apart from a superb copy of the Taj al-Salatin (Or. 13295), almost none of the Malay manuscripts I have been writing about are decorated in any way. Among the recently-digitised Malay manuscripts from the historic British Museum collections, the only other finely illuminated work is a copy of the Hikayat Isma Yatim, Add. 12379, from the John Crawfurd collection, which has a pair of ornamental frames around the first two pages. The manuscript has just been digitised in full and can be read here, with high zoom capabilities allowing a close inspection of the artwork. 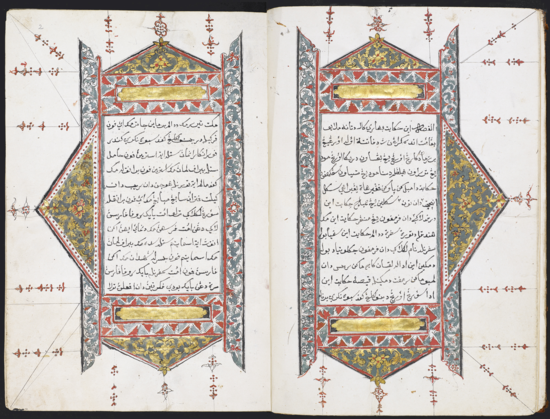 Hikayat Isma Yatim, by Ismail, recounting the story of a young writer who becomes a trusted advisor to the king.  British Libary, Add. 12379, ff. 1v-2r.

When I first began to survey illuminated Malay manuscripts in British and other collections,  it was surprisingly hard to make sense of the data: no patterns or trends could be read into the decorated frames, headpieces and tailpieces which adorned the books, however beautiful they were. It was only when I realised that the finest examples of manuscript art from the Malay world are found not in literary, historical or legal manuscripts written in Malay, but in manuscripts of the Qur’an and other religious works mainly written in Arabic, that the mists began to clear, and distinctive regional schools of Southeast Asian Islamic manuscript art could be identified. On the basis of the shape and structure of the decorated frames, and the palette and ornamental motifs used, it is usually possible to identify the origin of a Qur’an manuscript from Southeast Asia, whether from Aceh, or Terengganu, or Java.  But although many decorated Malay literary manuscripts exist, they stubbornly refused to group themselves into clusters on the basis of the artistic criteria which had proved so effective in identifying regional schools of Qur’anic illumination.

The reason for this discrepancy may lie in differing perceptions of the status of religious and literary manuscripts in the Malay world. Manuscripts of the Qur’an, containing the enduring and unchanging Word of God, are usually the most beautifully ornamented books in any Muslim culture, and much the same reverence enveloped certain other texts in the Islamic canon. It is where the written text was deemed to have intrinsic value that we find illumination in a prescriptive and conformist way, also fulfilling a functional purpose: decorated frames announced the opening and closing words of the Holy Book, while marginal ornaments guided the reader to standard divisions of the text.  On the other hand, Malay literary works were composed for oral delivery: they came alive while being recited aloud and while being listened to, with the beautiful sounds of sung syair (narrative poems) enjoyed as halwa telinga, literally 'sweetmeats for the ear'. There was thus little sense of permanence attached to any particular written manifestation of a work of literature; indeed, Malay scribes conventionally exhort their successors to correct and improve the text in front of them.  Perhaps this is why literary manuscripts were not traditionally deemed to merit illumination, with decoration only occasionally being supplied at the whim of individual scribes.

Another important consideration is differing contexts of production. Illuminated religious manuscripts in the Malay world almost always appear to have been created in the communities within which they were initially destined to be ‘consumed’. On the other hand, many illuminated Malay literary manuscripts known today were copied at the behest of European patrons, implying that western tastes and commercial incentives may have played a pivotal role in their production, with illumination added as halwa mata, 'eye candy', to attract the client and add value to the book.  It is hardly surprising that the only other illuminated Malay manuscript known to have been owned by John Crawfurd – a copy of Hikayat Dewa Mandu, written on English paper watermarked 'Budgen & Wilmott 1809' and perhaps commissioned by Crawfurd himself – was snapped up by another European collector, and is now held in the Staatsbibliothek (Preussischer Kulturbesitz) in Berlin.

What, then can we say about the British Library’s Hikayat Isma Yatim?  The gold panels at top and bottom of each page reflect the influence of Qur’anic illumination, for such panels would normally enclose surah titles in a Qur'an manuscript. The use of pale blue pigment may indicate a Javanese origin, which is in fact consistent with the majority of Malay manuscripts in the Crawfurd collection. And the suggestion of European patronage in the production of this illuminated Malay manuscript is strengthened by the presence of some writing exercises in Latin script on the first page. 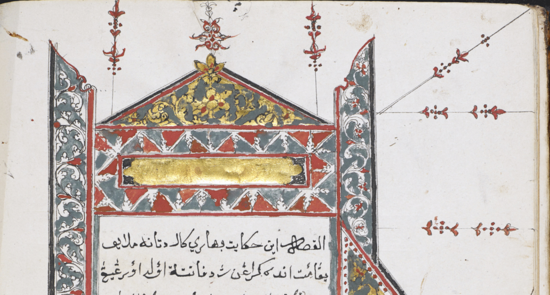 Detail of the first illuminated page of Hikayat Isma Yatim. The palette is centred on gold, red and pale blue, with black ink used for outlines and an important role played by ‘reserved white’, whereby the white background of the paper is manipulated as essential component of the colour scheme. British Library, Add. 12379, f.1v (detail).

Posted by Annabel Gallop at 9:55 AM