To many young Malays today, the most immediate fact that comes to mind about Wales is Malaysian ownership of the Cardiff City football team.  But there is another, much older, Welsh-Malay connection: for over 160 years, two important Malay manuscripts were housed in the small but historic town of Lampeter in southwest Wales.

Malay literary manuscripts are rare, and it is always a cause for some excitement when a previously unknown one surfaces. It is even more interesting when two manuscripts are found together, and they contain the two iconic Malay texts from the glory days of the great kingdom of Melaka: the Sejarah Melayu or Sulalat al-Salatin, ‘Descent of Kings’ (Or.16214), and the Hikayat Hang Tuah, ‘Epic of Hang Tuah’ (Or.16215).  These two manuscripts, which were acquired by the British Library in 2006 from the University of Wales in Lampeter, have just been digitised and can be read by clicking on the highlighted shelfmarks above.

The story of the manuscripts revolves around the figure of Thomas Phillips (1760-1851), a London-born but Welsh-bred East India Company surgeon who for many years was based in India.  In 1796 he visited Penang on his way back to India from Australia, and in 1811 he accompanied the British expeditionary force under Lord Minto which invaded and captured Java (Morgan-Guy 2010).  In 1817 Thomas Phillips retired and returned to London a wealthy man, but a notably generous and charitable one.  In retirement in London, he developed 'what can only be termed an obsession for the purchase and distribution of books on a massive scale’ (Walters 1999: 37), presenting over 22,000 volumes to St. David’s College in Lampeter, including our two Malay manuscripts. 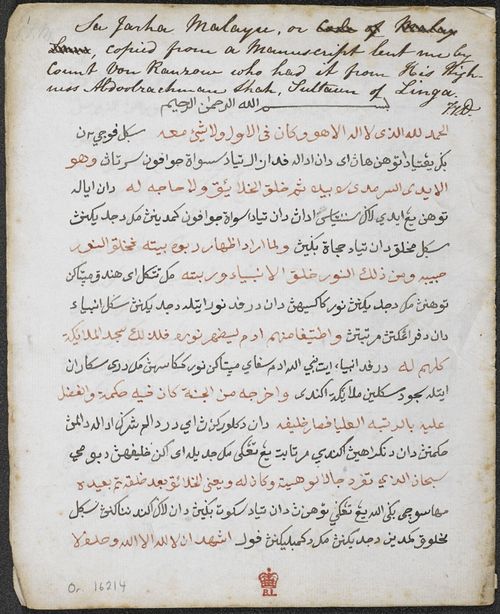 The manuscript of Sejarah Melayu is a copy of the ‘long’ version, ending with the defeat of Johor by Jambi, which was copied in Singapore on 16 Rejab (no year given), by Husain bin Ismail – one of the most prolific Malay scribes known (Tol 2001) – from a manuscript belonging to a person of Melaka. At the top of the first page is a note: ‘Sa Jarha Malayu, or Code of Malay Law, copied from a Manuscript lent me by Count von Ranzow who had it from His Highness Abdoolrachman Shah, Sultan of Linga. F.J.D.’. Lodewijk Carel, Graaf von Ranzow, was the Dutch Resident in the Riau islands, to the south of Singapore, from 1822 to 1826, while Sultan Abdul Rahman Syah, sultan of Riau, reigned in Lingga from 1812 to 1832. However, the identity of F.J.D. is unknown.  This manuscript can be compared with another copy of the Sejarah Melayu in the British Library, Or.14734, which I wrote about in September, which was copied in Melaka in 1873. 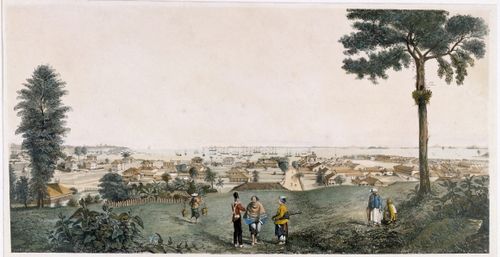 A view of Singapore published in 1830, just before the manuscript of the Sejarah Melayu was copied in Tanah Merah.  British Library, P1681.

The manuscript of Hikayat Hang Tuah contains some reading marks in pencil in English in the margin, dated 1835.  It joins another manuscript of this epic in the British Library, Add.12384, which was copied in Kedah, and which has also been digitised and can be read here. 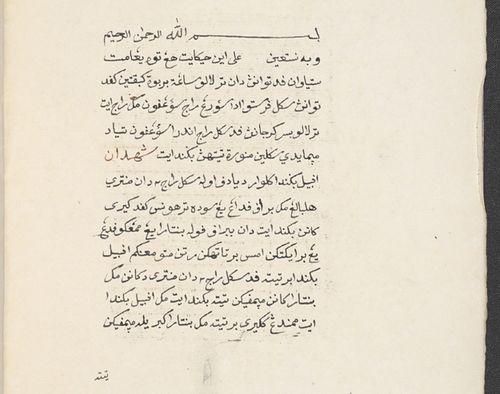 Although Phillips was in Southeast Asia on at least two separate occasions, he appears to have acquired the Malay manuscripts after his return to London in 1817, for they are both written on English paper, watermarked with the dates ‘1832’ in the case of the Sejarah Melayu, and ‘1828’ for the Hikayat Hang Tuah.  The two manuscripts were probably acquired by Phillips from the same source, for both bear pasted-on printed labels apparently cut out from a bookseller’s or auctioneer’s catalogue, that on the Hikayat Hang Tuah reflecting a complete lack of understanding of the role of rubrication (the use of red ink to highlight certain important words) in the Malay (or any other!) manuscript tradition: ‘Another copy of the Hang Tuah, of larger size, on European paper. / All the preceding Malay MSS, are fairly and elegantly transcribed in the Arabic Character, and on every occasion that a lacuna in the original MS is supplied in the copy, it is done in red ink; an evidence of the fidelity of the writer.’ The wording of the label suggests that this was just one of a number of Malay manuscripts offered for sale, presumably in London, probably between the years 1835 and 1842, the date of their donation to Lampeter.  I have not been able to identify the source of these printed labels; if anyone can, please contact me! Cutting from a bookseller's catalogue, and old ownership label from St. David's Lampeter, on the Sejarah Melayu manuscript.  British Library, Or.16214, f.10v.

Label from a bookseller's catalogue on the Hikayat Hang Tuah manuscript.  British Library, Or.16215, f.1r (detail).