The British Library has exciting news for researchers of Persian manuscripts. The previously unpublished descriptions for a projected third volume of the Catalogue of the India Office Library's Persian manuscript collection have been digitised and made available on the British Library's Digitised Manuscripts website. The catalogue was already well under way in the 1930s but with the intervention of the 2nd World War, the project was never completed. It contains, however, descriptions of about 1,500 works and it is our sincere hope that by making them available, this part of the British Library’s collection will become more accessible to researchers interested in the literature, history and culture of the Persianate world. The digitisation of this important catalogue has been made possible by a grant from the Barakat Trust. The murder of Iraj by his brothers Tur and Salm in a 16th century Shahnamah partly illustrated by Muhammad Yusuf (see earlier post on this manuscript). One of the manuscripts included in the newly digitised catalogue (BL IO Islamic 3682, f. 29r)

These draft descriptions, which were primarily written by hand, are the work of three towering figures in Oriental Studies in the UK.

The first scholar whose work is digitised here is Charles Ambrose Storey (1888-1968), who read Classics and Arabic at Cambridge.  He is famous for his monumental work, Persian Literature: A Bio-bibliographical Survey, which was intended as a response to Carl Brockelmann's Geschichte der arabischen Litteratur.  However, Storey's survey, though unfinished, is much more detailed and thorough, including the content of the works he discusses, information about the life of the author and others connected with the text, lists of known manuscripts with dates of their transcription, as well as a full bibliography of studies, modern editions, and translations. In 1919 Storey became Assistant Librarian and later Librarian at the India Office before being elected Sir Thomas Adams Professor of Arabic at Cambridge in 1933, a great honour and distinction.  When Storey passed away, he left his worldly possessions to the Royal Asiatic Society, which has worked to publish posthumously the remainder of his survey.  In addition to his survey, Storey also generated a great deal of research on the Persian manuscripts in the India Office collections which he continued working on after 1933 and which was never published; it is this that has been digitised and made available on-line.

The other authors are the equally well-known scholars, Reuben Levy (1891-1966) and Arthur John Arberry (1905-1969).  Levy read Persian, Turkish and Semitic languages at Oxford and taught Persian there until moving to Cambridge in the 1920s, where he was a lecturer of Persian before becoming full professor in 1950. Records show that he was still cataloguing manuscripts for the India Office Library as late as 1959. He translated a number of seminal texts from Persian into English, including the Qabusnamah of Kay Kawus b. Iskandar in 1951.

The third scholar to contribute to the planned third volume of the Indian Office Persian manuscripts catalogue was A.J. Arberry.  Like Storey, Arberry was employed by the India Office Library between 1934 and 1939, before being appointed to the Chair of Persian at the School of Oriental and African Studies, and subsequently – again following in Storey’s footsteps – to the Sir Thomas Adams Professorship of Arabic at Cambridge University.  A profilic scholar, Arberry's many editions of texts and translations from Arabic and Persian, along with his books on a range of topics on the literature and culture of the Islamic world, number around 90 volumes.  Famous for introducing the poetry of Jalal al-Din Rumi to the west, he also made elegant translations of the Qur'an and the poetry of Hafiz. Arberry also compiled catalogues of  the Arabic and Persian manuscript collections in the India Office Library, Cambridge University Library, and the Chester Beatty Library, all of which are indispensible tools for the researcher today. 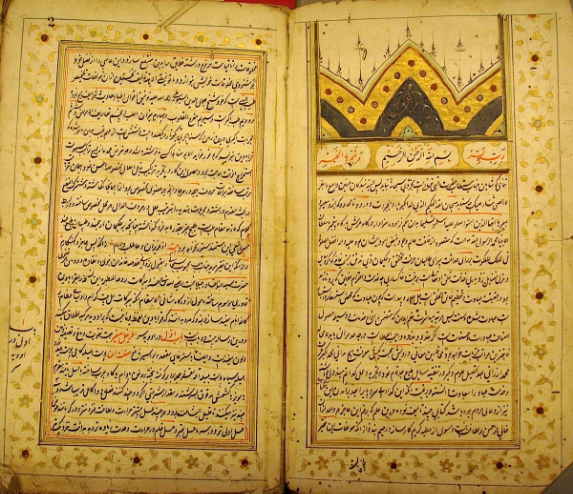 How to use the catalogue

There are three manuscript sequences included in the catalogue: India Office (IO Islamic) Persian manuscripts acquired between 1903 and 1936, and Delhi Arabic and Delhi Persian — these last two formerly part of the Mughal Imperial Library, Delhi. The digitised catalogue consists of 3778 images grouped in 38 folders (Mss Eur E207/1-38) but arranged in a somewhat haphazard order, partly by subject and to some extent by author.

If readers wish to browse the catalogue, there are partial subject indexes to 33 of the 38 folders:

Readers wishing to look up specific numbers quoted, for example, in Storey’s Persian Literature, or manuscripts listed in Fihrist (the online union catalogue of Arabic script manuscripts in the United Kingdom) should follow this link to the

Online index and concordance to vol 3 of the Catalogue of Persian Manuscripts in the India Office Library, Mss Eur E207 (unpublished)

This lists the contents of the catalogue in manuscript order. Each number is linked directly to its digital image on the web. If the description is several pages long, readers can move to the following or preceding page by using the forward and backward arrows at the top of the screen. A word of warning though: the numbers in the catalogue are largely unchecked and may sometimes be inaccurate!

To facilitate browsing the Delhi Persian collection, we have copied below a general classification of the collection according to a preliminary handlist (IO Islamic 4601-3) which was compiled in Calcutta under the supervision of H. Blochmann ca. 1869.

Posted by Ursula Sims-Williams at 9:56 AM