Asian and African Studies have just uploaded more than 15,000 images of Persian manuscripts online. This is the result of two years' work in an ongoing project sponsored by the Iran Heritage Foundation together with the Bahari Foundation, the Barakat Trust, the Friends of the British Library, the Soudavar Memorial Foundation and the Roshan Cultural Heritage Institute. 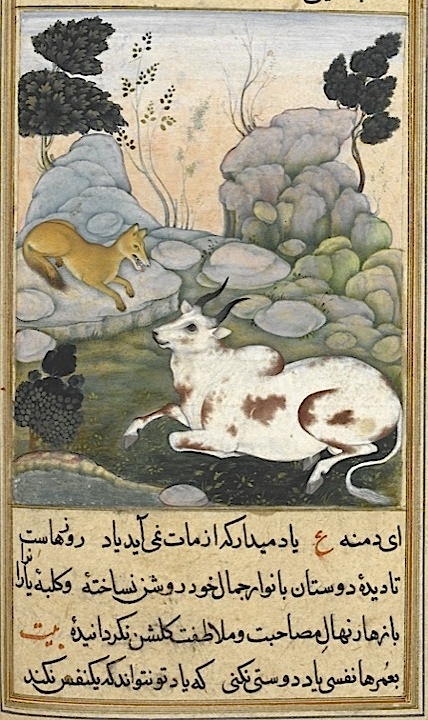 The jackal Dimnah tricks the ox Shanzabah into believing that his former friend the lion had turned against him, and was intending to eat him. From Husayn Va'iz Kashifi’s Anvar-i Suhayli. Mughal, 1610-11 (BL Add.18579, f87v)

The manuscripts were selected for their historical, literary and artistic importance and form part of a three year project to provide digital records of our Persian manuscript collection and images of 50 manuscripts.  We have created a dedicated project page which gives details of all the digitised manuscripts together with links to their images and supporting documentation. This is located at Digital Access to Persian Manuscripts but can also be easily found by clicking on the ‘Persian’ tab at the top of this page.

We’ve already written posts about several of these manuscripts, for example the Jalayirid Khamsah of Khvaju Kirmani (Add18113); Shah Tahmasp’s copy of Nizami’s Khamsah (Or.2265) and the late Timurid Mantiq al-Tayr by Farid al-Din ʻAttar (Add.7735), posts 1, 2 and 3 . We’ll be publishing more during the next few months so please subscribe to our blog (add your email in the box at the top of this page) to keep up with further developments.

Meanwhile, here is a selection from what we’ve digitised so far! Click on the links to go directly to the digitised folio. 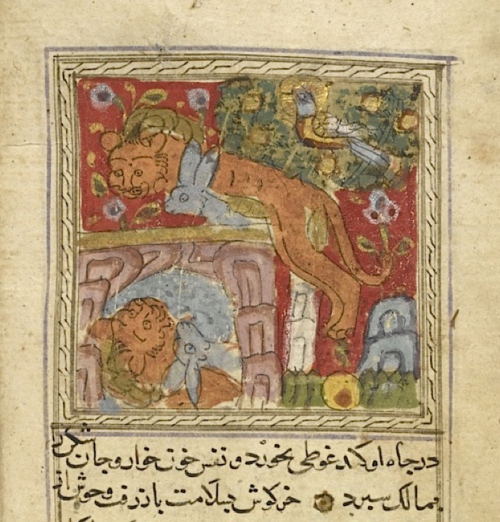 The well known story of the hare who tricks the lion into drowning by attacking his own reflection in the well. From Naṣr Allāh Munshī's Kalīlah va Dimnah dated 707/1307-8 (BL Or.13506, f 52v) 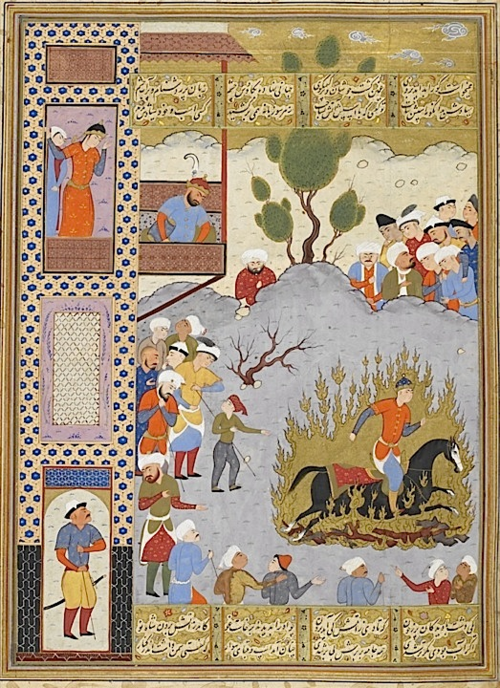 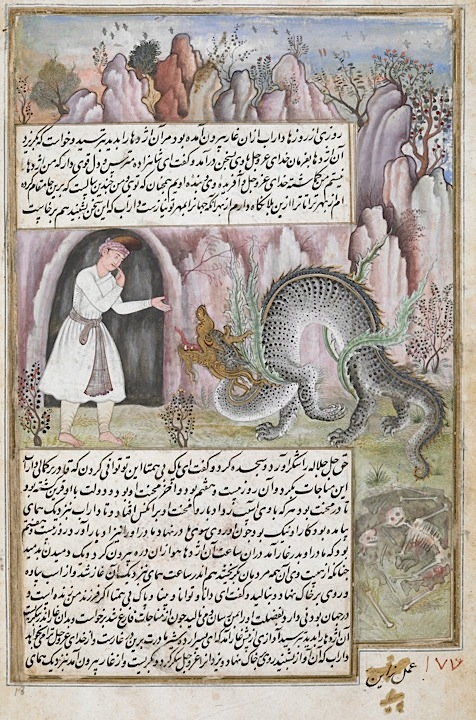 The dragon outside its mountain cave explaining to Darab that it had been sent by God as His servant on earth. Artist: Narayan, c.1580-85. From the Darabnamah, a prose romance written in the 12th century by Abu Tahir Tarsusi (BL Or.4615, f112v) 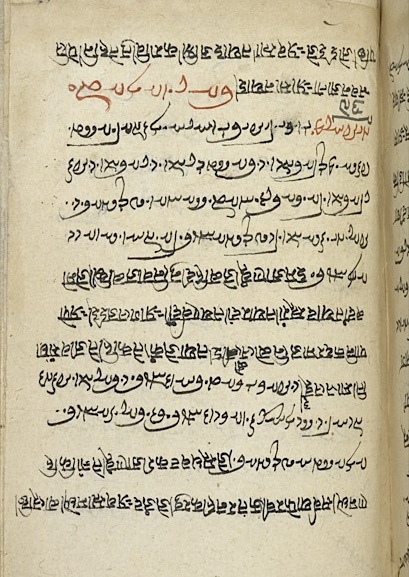 A leaf from the Saddar (‘100 doors’), a popular compilation of 100 rules for Zoroastrians which range from justifying instant death for sodomy to the treatment of good and evil animals, and the avoidance of different forms of pollution. This copy, dated Samvat 1631 (AD 1575), is in Persian language, but transcribed in Avestan (Old Iranian) script, together with a Gujarati translation (BL IO Islamic 3043, f 137r) 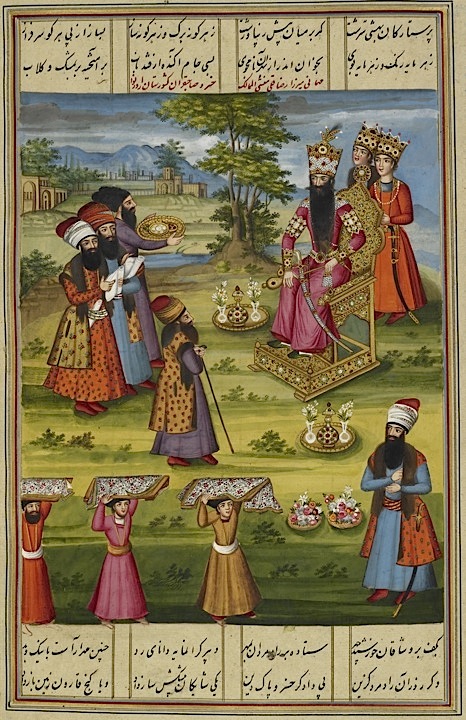 Posted by Ursula Sims-Williams at 12:31 AM

A question about the Saddar image above. I'm not well versed in Avestan, but the Gujarati/devanagari text appears to be upside down. Could it be that the entire image needs to be rotated 180 degrees?

Thank you for posting these gems. The Persian manuscript project is truly impressive, and exciting to see these works come to life online.

-------
Editor: Yes you're quite right, the Gujarati is upside down! The Avestan script however is the right way up. There is quite a tradition of interlinear Gujarati instructions being included in Zoroastrian texts this way (ie. upside down), it occurs most frequently in liturgical texts used in worship. There are two views about this:
a) my preferred: since Avestan reads from right to left but Gujarati left to right, this would have been the most economical usage of space. After writing the Avestan script, you turned the book upside down and carried on from where you had stopped.
b) the Gujarati was upside down so that priests or students who were standing facing the teacher/main priest could read the Gujarati explanation/translation while he was reading the Avestan out loud. However, this would only work when the text was a liturgical text and the Saddar is not that, more a practical text for learning the rules!

Thank you for the explanation--unexpected (to me, at least) and fascinating!

Thanks all for this beautiful blog.
I'm sharing it widely.

Who is the man to the right in the bottom register of the picture of the Qajar Shah, and what are the people in line before him holding on their heads?

-------------
Editor: Yes this point has been made before. The Gujarati is upside down but the Avestan is not. I went into this in some detail in the earlier comments. You sometimes need to click on a hyperlink to get them to display properly!