A Javanese manuscript artist at work

This beautiful manuscript of Serat Jayalengkara Wulang (MSS Jav 24), written in Javanese language and script, has just been digitised and can be read in full here.  It relates the story of the wanderings of Prince Jayalengkara, and his visits to sages in secluded places who instruct him in mystical science. The copying of this manuscript was begun on 22 Rejeb in the Javanese year 1730, equivalent to 7 November 1803, by a servant of Sultan Hamengkubuwana II of Yogyakarta (who ruled, with interruptions, from 1792 to 1828).  The manuscript is written in the quadratic style of script characteristic of Yogyakarta court circles, and contains numerous finely illuminated frames and illustrations. 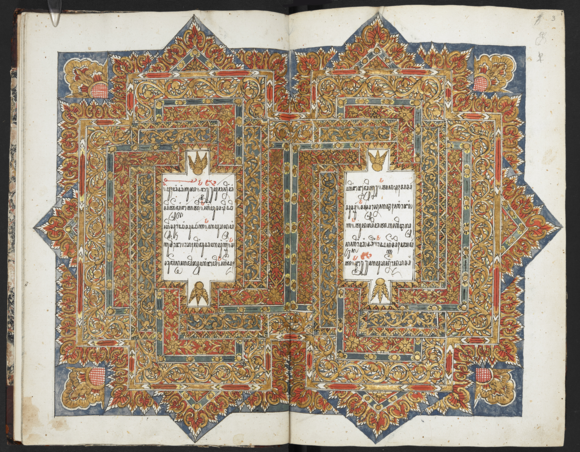 The text on the opening pages of this manuscript of Serat Jayalengkara Wulang contains an apology for the presumption of the author in attempting to contribute to literature, for the untidyness of the script, and for the awkward versification. British Library, MSS Jav 24, ff.2v-3r.

The art of manuscript illumination in Java reached its peak in the courts of Yogyakarta. It is not uncommon in paper manuscripts from other parts of Java to find more or less elaborate decorative frames on the first pages. But in Yogyakarta, and only very rarely in other areas, they can be found at selected places in the body of the text as well, marking major junctures in the narrative as a kind of chapter heading. These elaborate frames were known as wadana, a Javanese word literally meaning ‘face’. Like illuminated frames in other Islamic manuscript cultures, wadana often comprise symmetrical decorated frames across two facing pages and may consist primarily of geometric and foliate patterns.  But in this manuscript there are also wadana which occupy one page only, and which draw deeply on the Javanese iconographic repertoire, incorporating mythical creatures such as the naga, dragon, or makara, an acquatic animal with an elephant’s trunk. 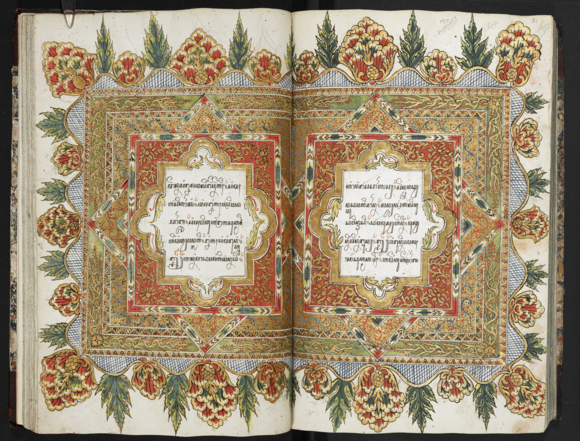 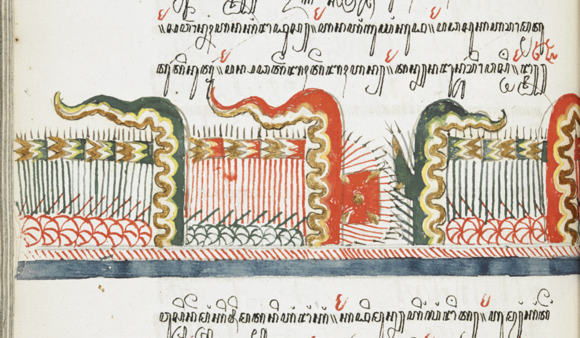 Depiction of a battle scene, with the two opposing armies with their pennants, gun carriages and lances. British Library, MSS Jav 24, f.144v (detail).

Although the text in the manuscript is complete, the illumination is not, and comparison of the finished and unfinished wadana provides a valuable glimpse into the techniques used by the illuminator. First, guidelines were prepared for the text, using a sharp implement and a ruler. The text was written between the ruled indentations, and then the process of decoration began. The straight lines of the frame were drawn in pencil with a ruler, while foliate patterns and other decorative elements were outlined directly in yellow pigment. Glue was then applied on the yellow outlines, probably with a fine brush, and thin gold leaf was then stuck on. The borders of the gilt were then outlined in black ink. Patterns could also be drawn on top of some of the patches of gold; a circle, for example, could be transformed into a rosette. Other elements of the pattern were also outlined in black ink.  Finally, the remaining parts were filled in with coloured pigments in blue, red, green and yellow, with the uncoloured background of white paper being left to function as ‘reserved white’ in some places. 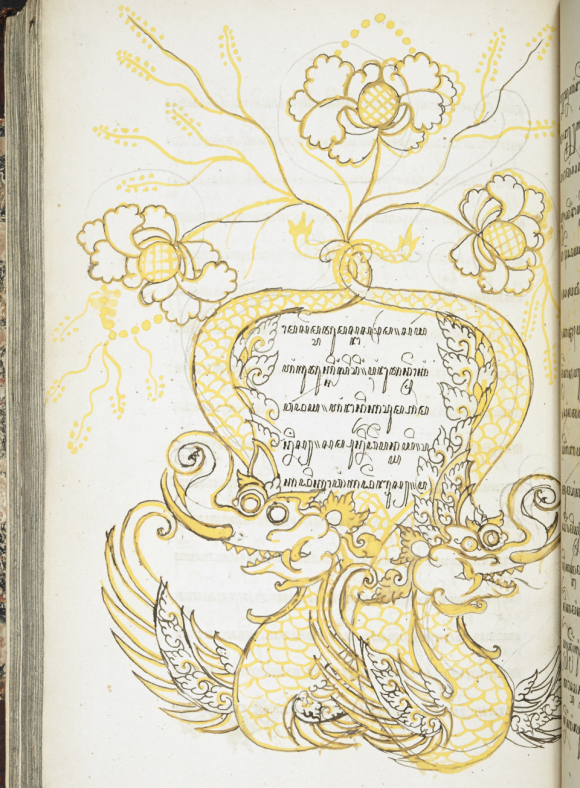 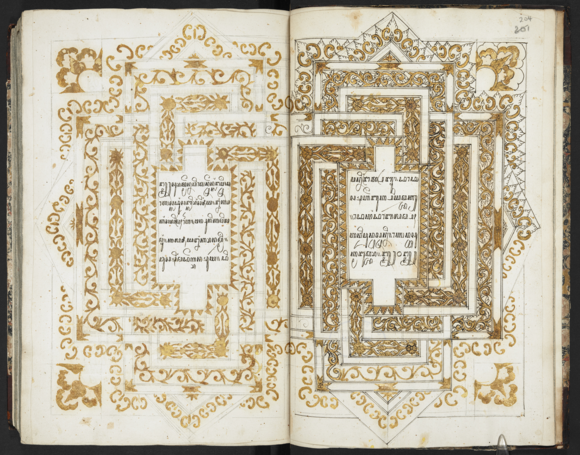 The final pair of decorated frames (wadana), which mirror the shape of the opening frames, are unfinished, with pencilled outlines and gold leaf on the left-hand page, and the additional use of black ink on the right-hand page to define the gold borders. British Library, MSS Jav 24, ff.203v-204r. 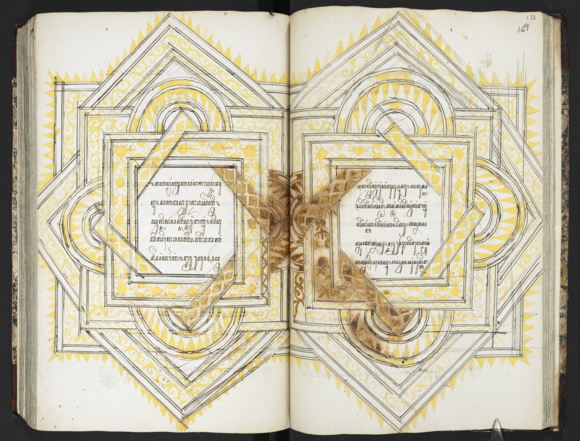 In this set of unfinished double decorated frames, the glue applied on top of the yellow pigment to attach the gold leaf appears to have corroded the paper, leaving brown burn marks. British Library, MSS Jav 24, ff.171v-172r.

Posted by Annabel Gallop at 3:56 AM