A Malay letter from Madura

The Malay letter of 1815 shown here, which has just been digitised, is from Pangeran Nata Negara, ruler of Sumenep on the island of Madura north of Java, to Captain James Clark, British Resident of Sumenep. The letter is swiftly written, probably by the prince himself, and is intimate in tone, and the Pangeran states that he is sending Clark presents of a Malay-style keris and a brazier or incense-burner (tempat bara api) belonging to his late father, the Panembahan.

A keris and scabbard from Madura. Tropenmuseum, Amsterdam, 903-13.

Pangeran Nata Negara, later known as Panembahan Nata Kusuma II and then as Sultan Paku Nata Ningrat, ruled Sumenep from 1812 to 1854.  He succeeded his father, Raden Temenggung Tirto Negoro, Nata Kusuma I, who reigned from 1768 to 1812. During the British administration of Java from 1811 to 1816, Nata Kusuma II became one of Thomas Stamford Raffles's chief informants on Javanese culture and history, appreciated for his knowledge of not only Javanese literature but also texts in Arabic.  Raffles lavishes praise on Nata Kusuma in his History of Java (London, 1817), concluding 'He is revered, not only for his superior qualifications and talents, but also for the consideration and attention he pays to the happiness and comfort of the people committed to his charge' (Vol.1, p.272).

James Clark was a British officer in Java who in December 1811 was appointed by Raffles to the temporary command of ‘Samanap’.  In April 1812 Clark was transferred to Banyuwangi but in November of that year he was appointed Commandant of Madura and civil administrator of Sumenep, where he remained until 1816. Thus it is likely that Clark had known Pangeran Nata Negara’s father before his death in 1812, albeit briefly, and therefore a gift of precious heirloom items (pusaka) belonging to the late Panembahan would have been particularly meaningful. 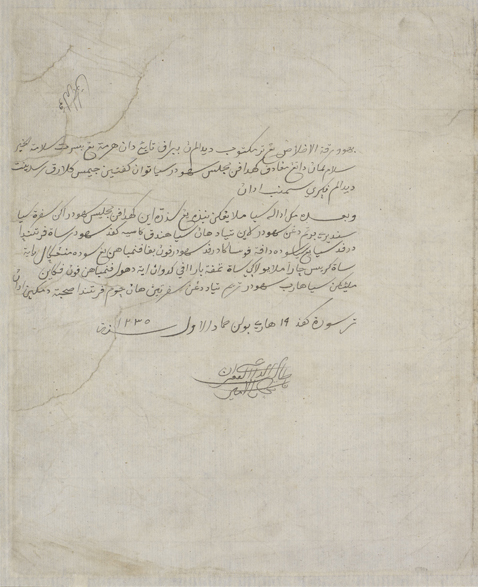 Malay letter from Pangeran Nata Negara of Sumenep to James Clark, Resident of Sumenep, dated 19 Jumadilawal 1230 (29 April 1815). The letter was given to the British Library in 1994 by Lt. Col. James de D. Yule, a descendant of James Clark and also of Sir Henry Yule, co-author of the Anglo-Indian dictionary Hobson-Jobson. British Library, Or.14858.

The letter begins with a religious invocation, Qawluhu al-Haqq, ‘His Word is The Truth’.  This was the most popular letter heading (kepala surat) used on Malay letters addressed to European officials, and the same heading is found in a letter from Bengkulu dated 1718. It is positioned towards the left side of the paper, traditionally regarded as a sign of politeness and respect, and is written diagonally upside down. The letter is written in a swift, competent and cursive hand, and as the signature is written in the same ductus and with the same brownish ink, the letter was probably written by the Pangeran himself.  In this letter, as in all other written communications in Malay from Madura of this period, the placename is always written as Sumeneb with a ba rather than the present-day spelling Sumenep.

The full text of the letter, in Malay followed by an English translation, is given below.

'His Word is the Truth
This sincere epistle, containing greetings and respects together with eternal best wishes, is sent into the presence of my brother Captain James Clark, Resident of Sumeneb.  After that, the reason I am sending this fragment of a note into my brother’s presence, in lieu of our meeting, is that my only wish is to give my brother a memento from me which I inherited from my brother’s father the late Panembahan, namely a Malay-style keris and a brazier, both of the Panembahan’s own using, and I hope my brother will accept these, though they are not as they should be, merely as a token of friendship.
Written on the 19th of Jumadilawal in the year 1230.
[signature] Student of The Summoner, the Pangeran Nata Negara, the prince'

Several other letters from Nata Kusuma have survived from his long reign, but this is the earliest known.  A future blog post will present Nata Kusuma's beautifully illuminated farewell letter to Raffles of 1816.

Posted by Annabel Gallop at 3:43 AM