We know almost nothing of the artists responsible for the exquisite illuminated frames which adorn the opening pages of Islamic manuscripts from Southeast Asia, for Malay decorum generally required self-effacing anonymity from artisans. But as will be shown below, to some extent our lack of knowledge may also stem from an imperfect understanding of the language world of traditional Malay manuscripts, for sometimes the very words in front of our eyes may have meanings which escape contemporary mindsets.

The British Library holds a fine illuminated manuscript of the Hikayat Nabi Yusuf, ‘The Story of the Prophet Joseph’ (MSS Malay D.4), copied by Lebai Muhammad on 9 January 1802. The manuscript came from the collection of John Leyden and was probably acquired in Penang in 1805 or 1806. The first two pages are adorned with a dense composition of scrolling floral and foliate motifs in red, green, black and yellow, lightened with the ‘reserved white’ of the paper itself. 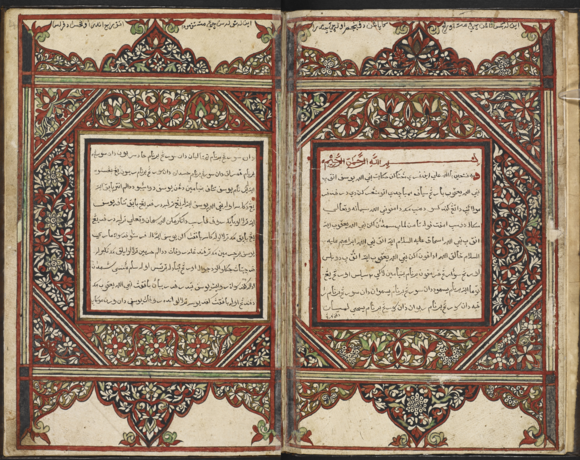 The manuscript’s original owner was one Cik Candra, who is named in a note on a flyleaf begging borrowers to take good care of the manuscript and stipulating a fine of three rials if the book is damaged. The writer justifies his concern by stressing that it has cost him dearly to ‘menulih kepalanya’. Menulih is the local dialect form for menulis, for in Kedah-Penang Malay the ending –s is replaced by –ih. The Malay verb menulis, from the root tulis, nowadays simply means ‘to write’, but a study of Malay manuscripts reveals that the more usual meaning of tulis/menulis was ‘to draw’. In his autobiography Hikayat Abdullah, the famous 19th-century writer Munsyi Abdullah describes how he learned to draw through decorating kites as a child (adapun daripada layang2 itulah asalnya aku tahu menulis bunga2 dan gambar2), while in the Hikayat Hang Tuah, the Malay envoy Hang Nadim greatly impresses the artists and textile designers (penulis, pandai menulis) of Kalinga (south India) by sketching beautifully the pattern he desires on his cloth (ditulisnyalah pada kertas bunga yang seperti kehendak hatinya itu). In traditional Malay texts, the verb ‘to write’ was more usually conveyed by menyurat, and this is indeed the term used by the scribe Lebai Muhammad in the colophon of this book (yang menyurat hikayat nabi Allah Yusuf ini dari pada permulaan datang ke sudahannya Lebai Muhammad).  We can therefore understand the writer's concerns for the wellbeing of the book, because it had cost him so much to draw the illuminated headings (kepala) at the beginning of the book.

In the light of this interpretation, we can now reevaluate two small inscriptions found at the top of the illuminated pages, which had been previously understood to refer to writing, but in fact relate to the decoration itself. At the top of the left-hand page (f. 4r) is inscribed: Inilah tulihsan Cik Mat Tuk Muda anak Raja Indera Wangsa di Perlis, ‘This is the drawing of Cik Mat Tuk Muda, the son of Raja Indera Wangsa in Perlis’. These few words are of enormous significance for the study of Malay manuscript art: this is the first known instance of the artist of an illuminated Malay manuscript explicitly 'signing' his work. Moreover, not only do we have his name, Cik (‘Mister’) Mat (‘Mat’ being the Malay short form for ‘Muhammad’), but also his title of Tuk (short for Datuk) Muda, his father’s title of Raja Indera Wangsa, and his place of origin, Perlis.

At the top of the right-hand page (f. 3v) is written: Inilah bekas tangan Cik Mat orang Kayangan dipinjam oleh Cik Candra, ‘This is the handiwork of Cik Mat, from Kayangan, made use of by Cik Candra’. Again, it identifies the illumination as the work of Cik Mat, from Kayangan, the capital of Perlis. Today Perlis is a small independent state at the northern end of the Malay peninsula, but around 1800 Perlis was still part of Kedah, and was ruled by a Kedah prince whose abode was at Kota Indera Kayangan.

We turn now to a second manuscript, held in the Royal Asiatic Society, Hikayat Syah Mardan (Raffles Malay 66), copied by Lebai Alang, which bears a date of sale of 1790. At first glance there is not much to connect the manuscripts: held in two different libraries, they derive from different collectors, are copied by different scribes, and contain dates some 12 years apart. Moreover while Hikayat Nabi Yusuf is filled with swirling foliate and floral scrolls, the Hikayat Syah Mardan is decorated with preponderantly geometric designs of concentric circles and mihrab-shaped cartouches. The main artistic linkages between the manuscripts are, rather, an identical and distinctive palette of red, green, black and reserved white, and a hard-to-define but impressionistic sense of compositional unity, for both manuscripts have densely illuminated frames extending right to the edges of the paper, set within a thin red outer border outlined in black ink. 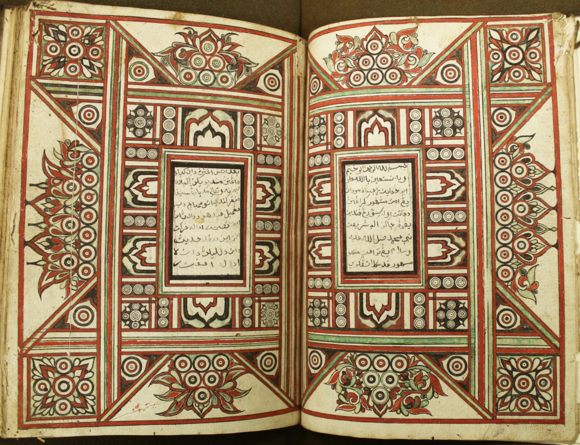 Closer examination confirms the relationship between the two manuscripts, for just as in Hikayat Nabi Yusuf, there is a lengthy note on an initial flyleaf naming the same Cik Candra as the owner of the manuscript, urging borrowers to treat the book carefully, and intriguingly, ending with the name of the design itself, ‘As for the initial illuminated frames of this book, the name of the design is the Thinking Cat’ (maka yang menulihnya di kepala surat ini nama tulihnya kucin bertenung). Here too we find influence of the local Kedah-Penang dialect, where final –ng is pronounced –n, and so kucin can be understood as kucing, ‘cat’, while bertenung refers to the act of divining, or thinking deeply to aid divination.

The manuscript Hikayat Syah Mardan also contains a further long autograph note from the artist himself, who uses here the long form of his name: ‘Cik Muhammad is the one who drew the illumination at the start of this book, which has been entrusted to the [book’s] owner Cik Candra; this what my drawing is like, because I am not very skillful, and moreover I am in a melancholic state, and so that is why it is not very beautiful’ (Cik Muhammadlah yang empunya tulisan di kepalanya surat ini dipinjam oleh tuannya Cik Candra itulah janis rupa tulisnya karana senda pun tiada berapa pandainya lagi pun senda duduk di dalam hal gunda gulana jadi tiadalah berapa moleknya tamat). Cik Muhammad’s self-deprecatory plaint is entirely in keeping with the cult of modesty and humility demanded by the mores of Malay literary culture, whereby writers, scribes and even book owners would vie to outdo each other in self-abasement, appositely termed by the writer Muhammad Haji Salleh as ‘Malay one-downmanship’. 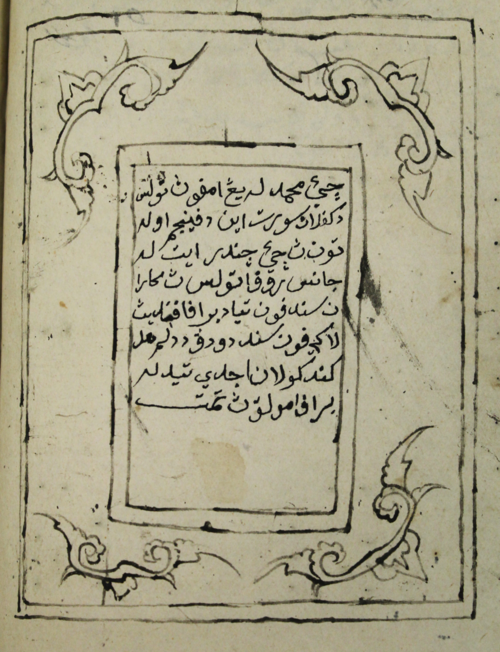 From this treasure trove of notes or 'paratexts' in these two manuscripts, one of the most intriguing nuggets is the use of the Malay term dipinjam oleh, found in both manuscripts to refer to the use of the artwork created by the artist, by the owner of the book. Although the standard meaning of dipinjam oleh would be ‘lent to’ or ‘borrowed by’, in the present context the phrase is probably better translated as ‘entrusted to’ or ‘made use of by’. This is a very interesting intimation of how the transaction of an artist illuminating a manuscript for its owner might have been viewed in the Malay book world at that time, and implies an acknowledgement of the continuing intellectual property rights of the artist. And it was precisely a concern to confirm in writing this 'copyright' (perhaps following a disagreement or misunderstanding) that has bequeathed to us the full name of a Malay manuscript artist of the late 18th century: Datuk Muda Muhammad, son of Raja Indera Wangsa, of Kayangan in Perlis.

All images of Raffles Malay 66 are reproduced courtesy of the Royal Asiatic Society.

This is an edited version published on 14 April 2016 of the original blog post, incorporating corrections thanks to Jan van der Putten and Abdur-Rahman Mohd. Amin.

Posted by Annabel Gallop at 1:21 AM