Today is the feast day of St Lawrence of Rome, an early Christian martyr who suffered a grisly death (we are aware that we highlight these types of saints quite frequently here on the blog; see here for St Apollonia, St Catherine, St Margaret, and St George).  The church which was built on the site of St Lawrence’s tomb became one of the principal churches in Rome, and a popular site of pilgrimage.  He features extensively in medieval art, and is often shown carrying his attribute, the gridiron on which he was martyred. 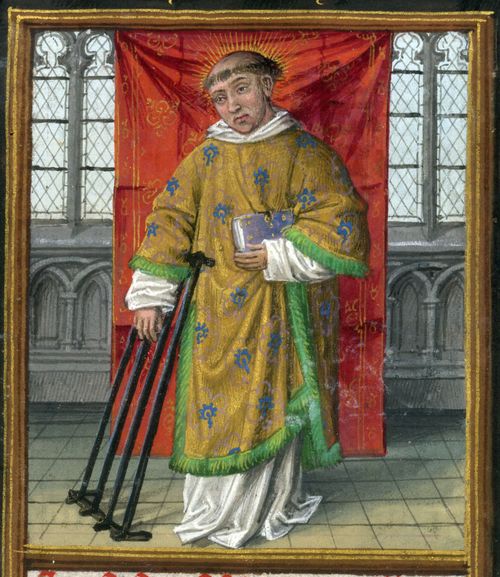 Detail of a miniature of St Lawrence holding a book and a gridiron, from the Breviary of Queen Isabella of Castile, Netherlands (Bruges), c. 1497, Add MS 18851, f. 431r

Not much is known of St Lawrence’s early life, but he was believed to have been born in Spain, and to have studied under future pontiff Sixtus in Zaragoza, which was then a renowned centre of learning in the Roman empire.  When Sixtus became pope, he appointed Lawrence as a deacon despite his young age.  Lawrence’s responsibilities included the maintenance of the treasuries of the church as well as the giving of alms to the poor, and he took the latter charge in particular very seriously, as we will soon see. 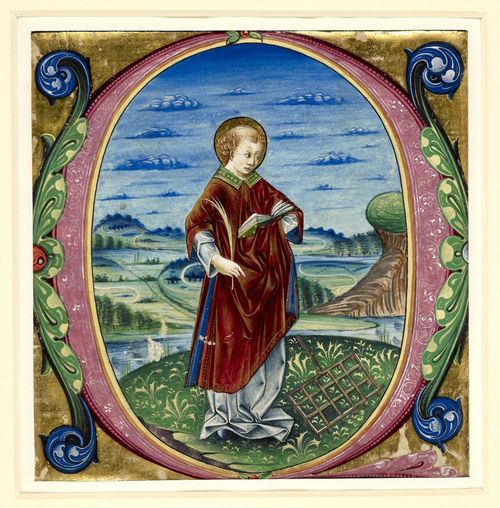 Detail of a miniature of St Lawrence holding a book and standing near a gridiron, cutting from a choirbook, Italy (Lombardy) 3rd quarter of the 15th century, Add MS 18197, f. H

In 258 the Roman Emperor Valerian commenced a persecution of the church, and ordered that all bishops, priests, and deacons should be put to death.  Pope Sixtus was seized while celebrating the liturgy and was immediately executed.  Seeing that his death was also imminent, Lawrence, according to his legend, worked as quickly as he could to distribute all the wealth of the church to the poor, crippled, and suffering people of Rome.  When he was ordered by the prefect of Rome to turn over the riches in his care, Lawrence gathered up these unfortunates and presented them to the prefect, telling him that these were the true treasures of the church. 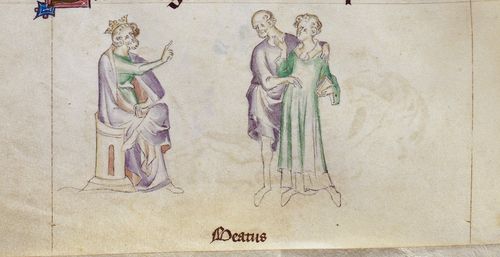 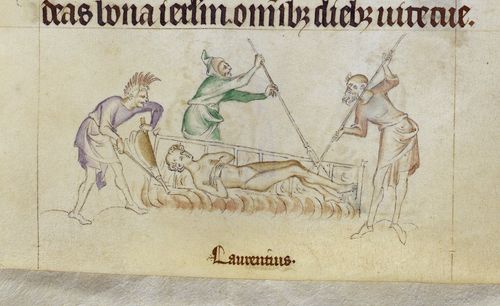 The prefect was enraged by this act of holy defiance and ordered that Lawrence should die a horrible death; the future saint was sentenced to be burnt alive on a gridiron.  Lawrence did not lose his faith (or his sense of humour) even while in the midst of this torture, however; after several hours he is said to have quipped to his executioners, ‘Turn me over; I’m done on this side!’. 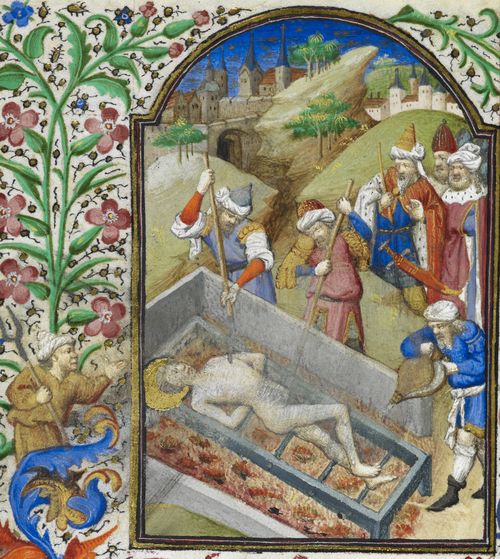 Detail of a bas-de-page scene of St Lawrence being martyred on the gridiron, watched by a sympathetic marginal character, from the Dunois Hours, France (Paris), c. 1339 – c. 1450, Yates Thompson MS 3, f. 273v

St Lawrence is one of the most beloved saints in the calendar – perhaps owing in some small sense to this humour in the face of adversity, but also because of his love of the suffering and downtrodden of society.  He is the patron saint of the poor, and, rather insensitively, of cooks.  We hope you have a very happy St Lawrence’s Day! 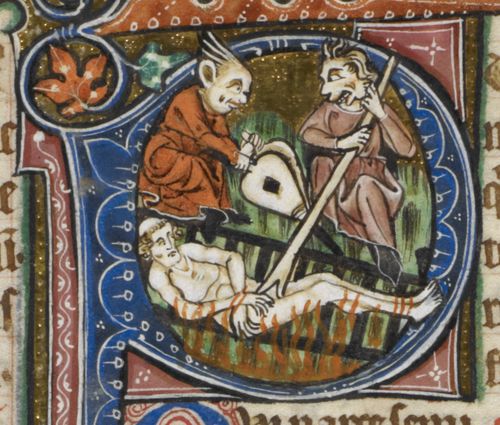 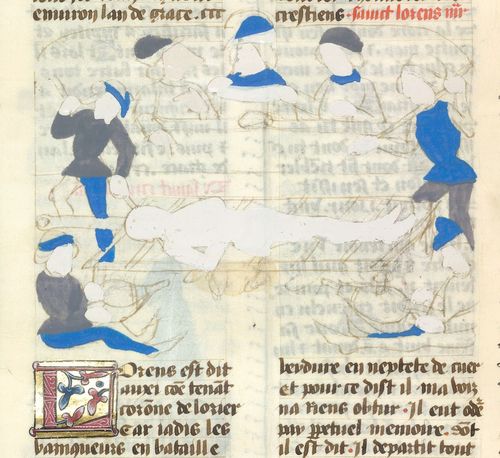 Detail of a young St Lawrence with his gridiron, at the bottom of a calendar page for August, which contains his feast day, from the Hours of Bonaparte Ghislieri, Italy (Bologna), c. 1500, Yates Thompson MS 29, f. 8r

Detail of a bas-de-page scene of St Lawrence being martyred on the gridiron, from the Taymouth Hours, England, 2nd quarter of the 14th century, Yates Thompson MS 13, f. 85r [for more on this fabulous manuscript, please see our post The Taymouth Hours.  And the sharp-eyed among you may have noticed here certain odd similarities to the work of the artist of the Unicorn Cookbook!).

Wonderful to find you! I was looking fo rimages of Stt Lawrence to use with my meditation verse this morning and am glad to run acoross a fellow traveler! Pece. And have a wondreufl day. Louise