The British Library has a great collection of Apocalypse manuscripts and we have featured them in a number of recent blogposts. At the end of this post, we provide a list of the best-known Apocalypse manuscripts that have been digitised in recent years. The most recent Apocalypse to be digitised is the rather lesser-known but finely-executed Additional MS 35166, an Apocalypse in Latin with commentary by Berengaudus and a life of St John the Divine, whose visions are recorded in the Book of Revelation. 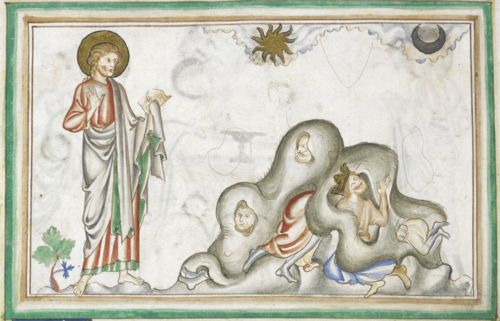 The top half of every recto and verso of the 38 folios (there are a number of leaves missing, from Revelation 10:7 to 16:8) has a miniature, and underneath is a brief passage from the Apocalypse written in black ink, followed by Berengaudus’ commentary in red ink. 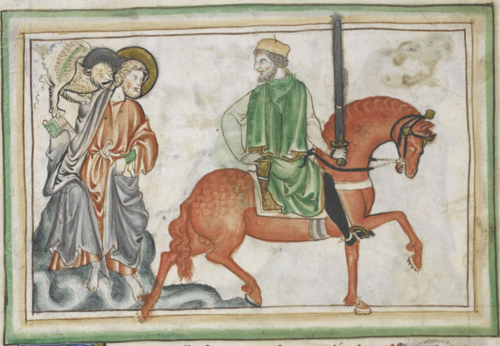 The exquisite tinted drawings faithfully portray John's vivid descriptions of his visions. The illuminator has incorporated John into the majority of scenes, which lends a sense of immediacy to the images: the reader witnesses the horror and awe of the Apocalypse alongside him.

Preceding and following the Apocalypse are scenes from the Life of St John. His death at the hands of the Emperor Domitian in a cauldron of boiling oil is depicted here: 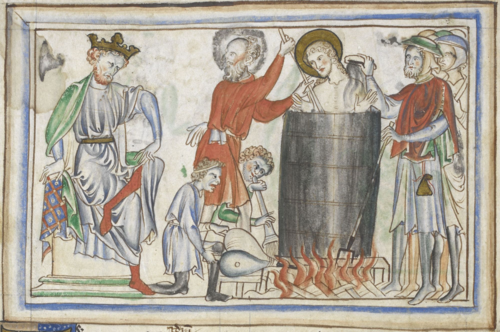 The stories from the life of John are from the New Testament Apocrypha and include the tale of a young man who is presented to a bishop by John and becomes his cup-bearer. The young man, riding a white horse, joins a band of robbers and they kill and steal. John is told this by the bishop and rides out to bring the young man back to the bishop. 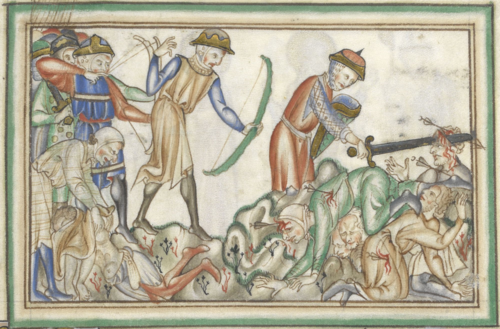 This Apocalypse manuscript may have belonged to a religious guild known as the Kalendars, as it is inscribed, ‘Liber Domus Kalendarum’ on the first folio.  The Kalendars were religious guilds of the Middle Ages, composed of clergy and laity, known to have existed in Bristol, Exeter and Winchester in the 12th century.  They met on or around Kalends (the first day of the month), hence the name ‘Kalendars’.

For comparison, here are some images of the opening of the Sixth Seal and the earthquake (Rev. 6:11-15) in several other Apocalypse manuscripts held by the British Library, to give you a sense of the differing styles of illumination: 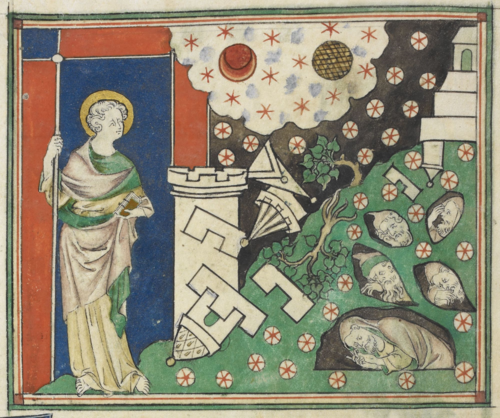 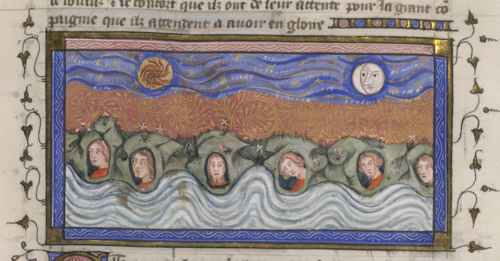 The earthquake at the opening of the Sixth Seal: six heads in holes in the ground with a river in the foreground and the sun and moon, Yates Thompson MS 10, f. 11r (detail), France (Paris), 1370-1390 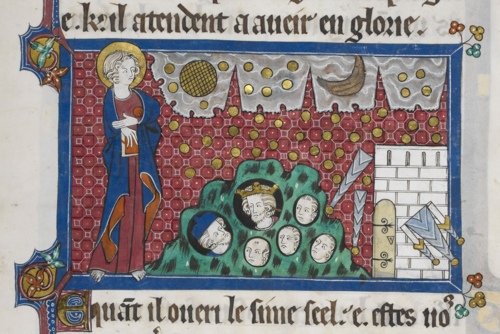 The opening of the Sixth Seal; the earthquake. At the top, a darkened sun and moon and stars falling from the sky. In the centre, a king, a master and other men hiding in caves. To the right, a building collapsing. To the left, St John is witnessing the scene. Royal MS 15 D II, f 131r (detail), England, c 1310 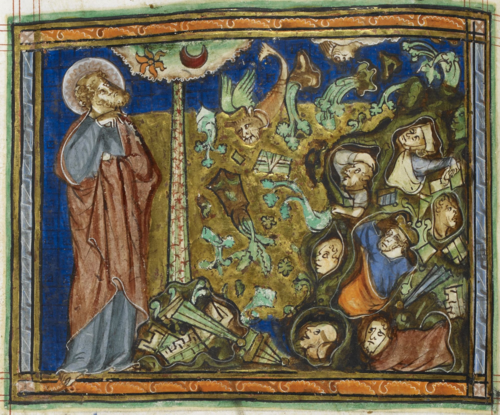 The Sixth Seal: St John looking up at a cloud containing the sun and moon; on the right the ruins of a town and men and women in holes in the ground, with fragments of objects falling from the sky. Add MS 42555, f 16v (detail), England, 3rd quarter of the 13th century