‘Bad work’: that is how M.R. James described an unusual German Apocalypse at the British Library, in his 1927 Schweich Lectures on The Apocalypse in Art. The full-page illustrations in Add MS 15243 – which was published on Digitised Manuscripts at the end of 2014 – may lack some of the finesse of those found in English or French Apocalypses, but a closer look reveals plenty of interest in this manuscript. 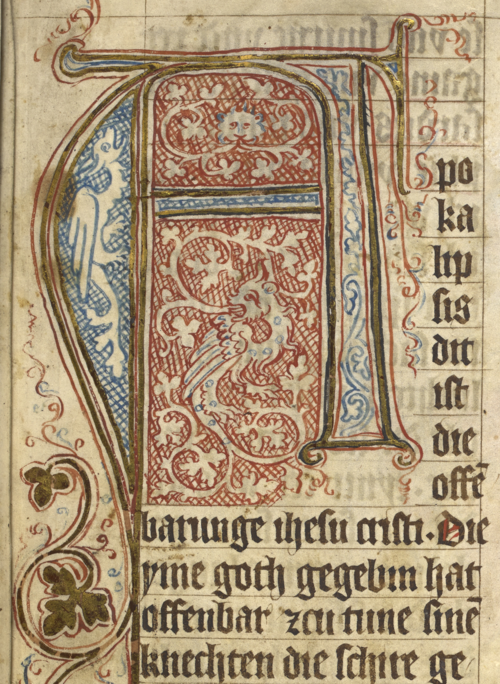 As followers of this blog will know already, the particular fashion for Apocalypse manuscripts in thirteenth- and fourteenth-century France and England is illustrated by the numerous copies that survive from those countries. Many in the British Library’s collections have been digitised and have featured in such blog posts as Apocalypse Now, Apocalypse Then, Fire and Brimstone, and Visions of the Apocalypse. 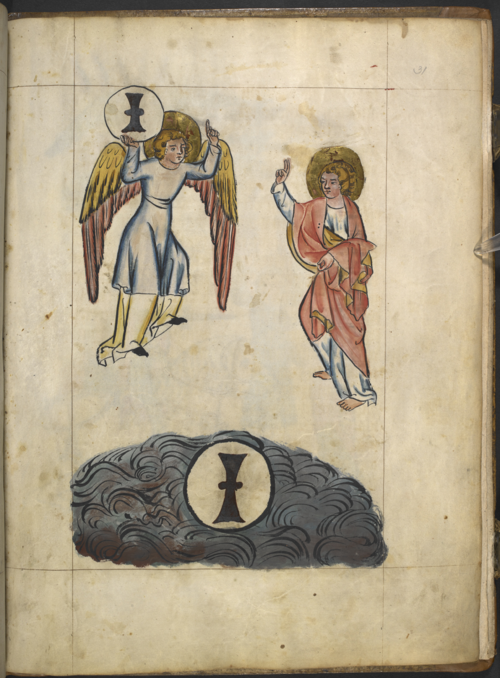 How common were German Apocalypse manuscripts? James’s survey – acknowledged at the time as being incomplete – gives a slightly misleading impression of the manuscript’s rarity. Of the 92 Apocalypses he listed, a mere six were from Germany, and only Add MS 15243 among them contained the text in German. Further surveys in the journal Traditio in 1984-86 and the Katalog der deutschprachigen illustrierten Handschriften des Mittelalters have increased the numbers, and Carola Redzich’s 2010 study of the language, transmission and reception of German Apocalypses has revealed a lively tradition in that country as well. (All bibliographical references may be found in full in the catalogue entry). 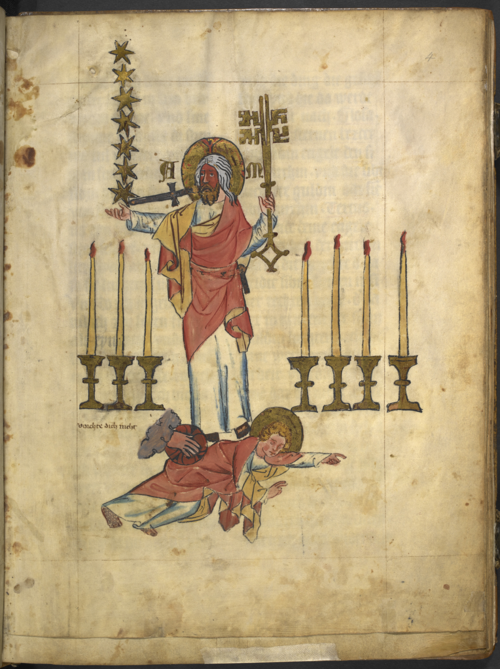 The manuscript dates to around 1350-1370 and is possibly from Erfurt in Thuringia, Germany: blind-stamped motifs on the pig-skin binding match those used by a workshop there around 1490-1520. It contains a series of fourteen full-page, unbordered, illuminated miniatures. How closely these illustrations relate to the text varies from image to image. Some are very close to what John described, while others are not, owing to idiosyncratic inclusions or omissions by the artist. The book opens with a miniature of John in a cave on the island of Patmos (which featured in our most recent hyperlinks announcement). This is followed by another that depicts the beginning of his visions (shown above). Here, the artist has compressed two narrative stages together into a single scene: the appearance of Christ with various accoutrements (Rev. 1:12-16), and John’s falling ‘at his feet as dead’ and Christ laying his right hand upon him and saying ‘“Fear not”’ (Rev. 1:17). 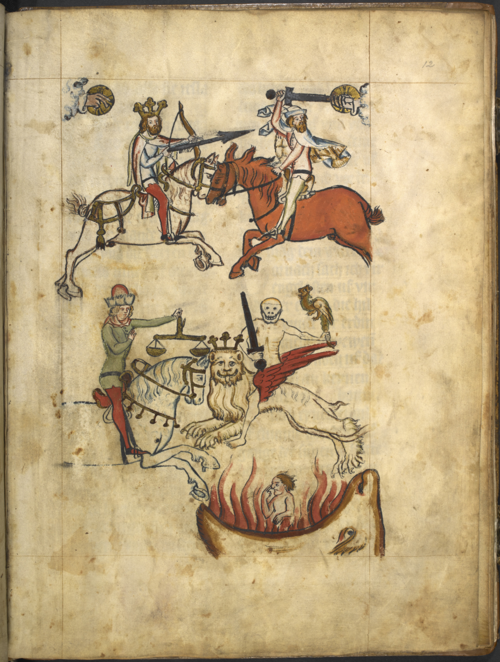 The miniature illustrating the appearance of the Four Riders diverges from the text (Rev. 6:1-8). The first two Riders are as described in the Book of Revelation: the first on a white horse, wearing a crown and carrying a bow; the second on a red horse and wielding a large sword. Differences emerge thereafter. The third Rider is on a white, rather than a black, horse. Most strikingly, the fourth Rider – an emaciated figure with a skull-head, representing Death – is mounted on a winged lion. According to the text, Death is mounted on a ‘pale horse’. Why does the decorative scheme deviate here, and how common was this in Apocalypse manuscripts? Lion-hybrids are described elsewhere in the Apocalypse text, the closest but by no means exact match being the first of the ‘four living creatures’ described in Rev. 4:7-8. This lion was accompanied by a calf, a man and an eagle, each furnished with six wings and ‘full of eyes’, which are immediately recognisable as the symbols of the Evangelists. A winged lion is also mentioned in the Old Testament, in the first of Daniel’s apocalyptic visions (Daniel 7:4). Their relevance to this particular part of the Book of Revelation, and the reasons for the artist’s choice, are unclear, however, as are the reasons for the artist’s deviation from the text. The complexity of John’s visions, and the obscurity of the language in which they are expressed, presented obvious challenges to the manuscript illuminator. Here, the artist has included certain elements from the text: the moon being under the Woman’s feet, her bringing forth a child that is delivered up to God, and the Beast with seven heads and crowns that drew stars from the heavens and cast them down to earth. Others he has abandoned: the ten horns on the Beast (Rev. 12:3) and the Woman being ‘clothed with the sun’ (Rev. 12:1). According to the text, the Woman is also ‘crowned with twelve stars’ (Rev. 12:1), which the artist has interpreted as ‘crowned, with twelve stars’, placing the twelve stars around her head like a nimbus or halo. That three are meant to be hidden behind the child is cleverly indicated by the twelfth star emerging from behind his back as the Woman lifts him up to God.

The collation of this manuscript is highly irregular. Each of these illustrations, as well as two leaves of text, are on single leaves of parchment that have then been inserted into the manuscript. The order in which they have been stitched in is unusual in places, and to add to the complexity in a few instances parchment strips have been added to reinforce the leaves against the sewing. We have provided a detailed description of the collation in the record, but this seems an instance where a visual aid might be helpful!