I recently wrote on how to tell if a Malay manuscript is written on Chinese paper, instead of the more usual medium of European paper.  Another type of writing material sometimes used for Malay manuscripts, particularly those from Java, is Javanese paper called dluwang (or daluang), hand-made from the beaten bark of the paper mulberry tree, Broussonetia papyrifera, called pohon saeh in Indonesia.  In fact, dluwang is paper in all but name, as the technical definition of paper is a ‘matted or felted sheet, usually made of cellulose fibres, formed on a wire screen from water suspension’ (Encyclopaedia Brittanica), for dluwang is not made from fibres suspended in water and then dried in sheets.  Instead, a strip of the inner bark of the saeh tree is cut out, soaked in water, and then pounded repeatedly and polished until the surface is smooth enough to write on (Ekadjati and McGlynn 1996). 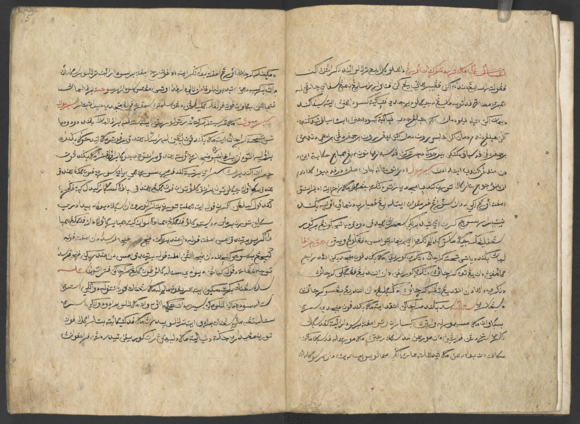 Dluwang is easy to recognize because of its highly distinctive brown, polished surface, with the woody fibres still very visible.  When well-made, the resulting paper provides a fine smooth writing surface which should last for centuries without degeneration.  However, poorly-made sheets of dluwang may be fibrous and of uneven thickness, sometimes with evident holes and knots, and can be very susceptible to insect damage. Dluwang has been used as a writing material in insular Southeast Asia for many centuries. The oldest known example is the Tanjung Tanah Code of Law, a manuscript from Kerinci in central Sumatra in Malay in a pre-Islamic Indic script, which is written on dluwang which has been carbon-dated to the 14th century.  The oldest dluwang manuscript in the British Library is a text on Islamic jurisprudence in Arabic and Javanese from the collections of Sir Hans Sloane (Sloane 2645) dated 1623/4, which is still in excellent condition today. 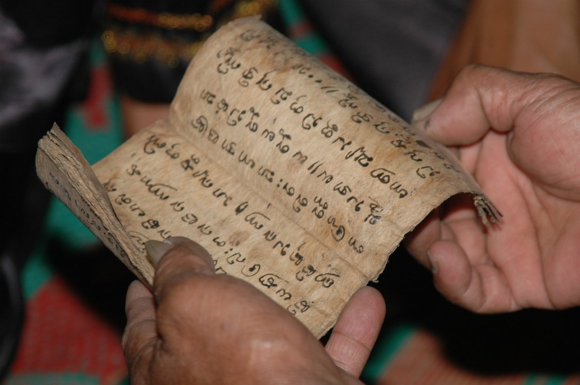 The Tanjung Tanah manuscript, written on dluwang in the 14th century. Reproduced courtesy of Uli Kozok.

More recently, certainly from the 18th century onwards, there is no evidence that dluwang as a writing material was produced outside the island of Java, and so the use of dluwang in a manuscript is a very strong indication of a Javanese origin. This allows us to track the travels of manuscripts such as a copy of a Panji story (Or. 11365) which is said to have been presented by Tengku Khalid, Bendahara of Kelantan, but which must have originated in Java as it is written on dluwang. It is perhaps hardly a coincidence that most of the Malay literary manuscripts in the British Library written on dluwang contain stories from the Javanese Panji romances, popular since the 14th century. In this cycle of stories Panji, also called Raden Inu Kertapati, prince of Kuripan or Janggala, is betrothed to Princess Candra Kirana of Daha, who disappears on the eve of their wedding. Panji undergoes many adventures on his journeys while seeking his beloved. 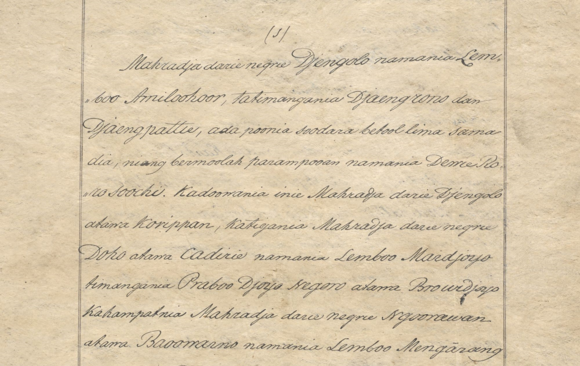 Beginning of a Panji story, about the Maharaja of Jengolo, written in Malay in romanized script. British Library, Or.16446, f.1r (detail).

Dluwang is made through the same process as tapa or bark cloth, traditionally the main source of clothing in the islands of the Pacific Ocean. Tapa was first described in European sources by Captain James Cook, who collected samples from Tahiti in 1769 during his first voyage of exploration. 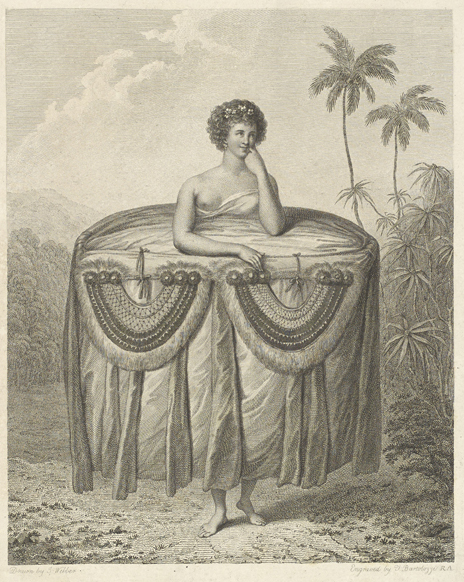 ‘A girl bringing presents to Captn Cook’, wearing a ‘dress’ consisting of a large quantity of tapa cloth bound about her waist, intended as a gift for Cook.  Drawn by John Webber and engraved by Francesco Bartolozzi, from Cook’s Third Voyage (1776-1780). British Library, Add.23921 f.48.

Posted by Annabel Gallop at 4:42 PM