How many people does it take to digitise a Malay manuscript?

To start with, none of this would have been possible without our generous patrons, William and Judith Bollinger, who, when they moved from London to Singapore, expressed their desire to support collaboration between the British Library and the National Library Board (NLB) of Singapore, by digitising material held in the British Library of interest to Singapore.  The evolution of the project was overseen by Sarah Frankland and colleagues in the Development Office, while three main collection areas in the BL – Malay manuscripts, early maps of Singapore, and papers relating to Sir Stamford Raffles – were identified by Noryati Abdul Samad and Ong Eng Chuan of the NLB during a research visit to London in January 2012.

Once we had agreed to start by digitising all the Malay manuscripts in the British Library, Rossitza Atanassova, Digital Curator, kindly shepherded me through the complex technical and procedural framework of the process.  The selection of Malay manuscripts was made from the authoritative published catalogue by M.C. Ricklefs & P. Voorhoeve, Indonesian manuscripts in Great Britain (London, 1977), but one of my main tasks was to recatalogue all the manuscripts on the BL’s online catalogue using the Integrated Archives and Manuscripts System (IAMS).  All the manuscripts selected for digitisation had to be condition-checked by conservator Jane Pimlott, and at this important hurdle, a few items had to be dropped as being too fragile. Then, with the helpful advice of Anna Vernon, Andrew Tullis and Rachel Marshall, all the choices had to be considered carefully to ensure that digitisation would not cause breaches of copyright, necessitating the further omission of a couple of more recent items. 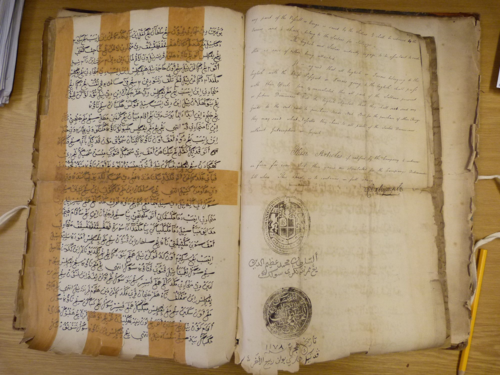 The collection of treaties in Malay and Tausug signed between Alexander Dalrymple for the East India Company and the sultans of Sulu, 1761-1764, which can not currently be digitised due to the poor condition of the volume.  British Library, IOR: H/629.

It was an exciting moment when photography started: Chris Lee allocated us space in the Imaging Studios in June 2013, and assigned photographer Neil Cowland to the task.  As Neil worked through the manuscripts, producing high-resolution TIFF images of nearly 100 MB per page, Sarah Biggs quality-checked all resulting images.  One of the most complicated elements of the process was filenaming: according to long-standing British Library conventions, blank pages and fly leaves of a manuscript are not numbered, but the resulting digital images needed to be numbered appropriately to ensure they appeared in correct sequence in the digitised version of the manuscript. 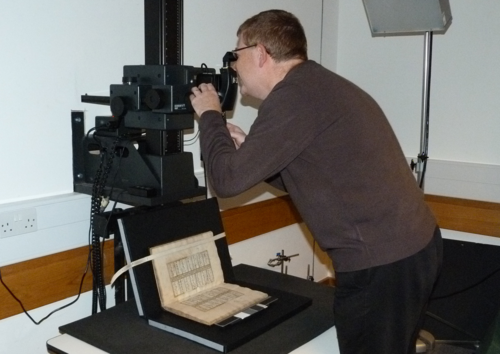 Neil Cowland preparing to photograph a manuscript in the Imaging Studios of the British Library. 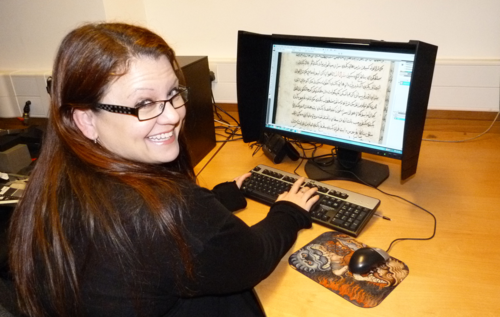 Sarah Biggs checking the qualityof a digital image from a manuscript of Hikayat Dewa Mandu, Add. 12376.  Sarah is famed as the author of the ‘Knight v. Snail’ posting in Sept 2013 on the BL’s Medieval Manuscripts blog, which garnered 36,000 views worldwide in a single day!

Finally, all images were published online in the DIPS system, through the BL’s Digitised Manuscripts site, which was originally developed for a Greek manuscripts digitisation project funded by the Stavros Niarchos foundation.  The Malay project was the first time that manuscripts written in a right-to-left script had been uploaded, and the ‘open book’ viewer, showing two facing pages side-by-side, therefore needed adjustment.  The revised viewer, which has been developed by Paul Jones and Ken Tsang, will benefit not just Malay manuscripts but all other languages written in right-to-left scripts such as Arabic, Chinese, Japanese, and Hebrew. 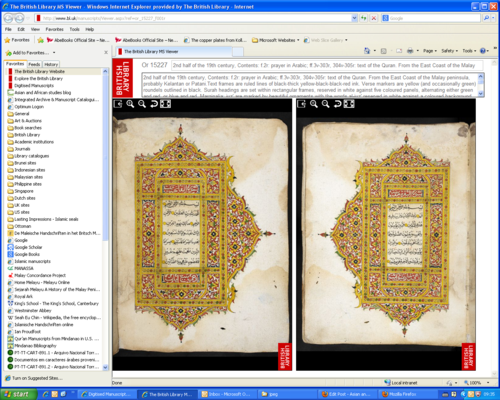 'Open book' view of a book in Arabic script, read from right to left, in the British Library's Digitised Manuscripts viewer.  Malay Qur'an, from Kelantan or Patani, 19th c., Or. 15227, ff. 3v-4r. 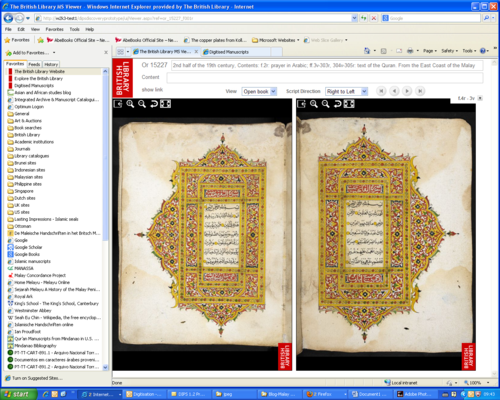 'Open book' view for books in right-to-left scripts in the new prototype of the Digitised Manuscripts viewer, which will also offer a 'top to bottom' viewing option for palm leaf and other manuscripts.

So when the Memorandum of Understanding – drafted by Shanthi Thambapillai – was signed on 19 August 2013 in Singapore by Chief Executives Roly Keating for the BL and Elaine Ng for the NLB, and the first few digitised Malay manuscripts went live on both the BL and NLB websites, it represented the culmination of many months’ work.  Efforts to publicise the digitised manuscripts continue, through the Asian & African Studies Blog and Twitter account @BLAsia_Africa pioneered by Ursula Sims-Williams and Malini Roy, and the appreciative comments we receive from all over the world, particularly from Singapore, Malaysia and Indonesia, are our greatest reward.

Posted by Annabel Gallop at 1:16 AM