In 1795, the Dutch ruler William V fled to Britain to escape Napoleon’s advances. There he issued the ‘Kew Letters’, giving Britain temporary authority over Dutch possessions overseas, in an attempt to keep them out of French hands. Over the next decade, the Napoleonic war arena spilled across the Indian Ocean and into Southeast Asia, and by 1800 the British had captured the Dutch territories of Padang in west Sumatra, and Ambon and Ternate in the Moluccas.  In October 1810 Lord Minto, the Governor-General of Bengal, sent Thomas Stamford Raffles to Melaka as ‘Agent of the Governor General to the Malay States’, with the confidential mission of planning for the British invasion of Java, at the time in Franco-Dutch hands.

View of Batavia from the sea.  From J. Nieuhof, An embassy from the East-India Company of the United Provinces, to the Grand Tartar Cham Emperour of China (London, 1669).  British Library, X.1202.

The British expeditionary force set sail from Melaka in June 1811 and on 4 August 1811 landed at Cilincing in West Java. The city of Batavia fell on 8 August, and within six weeks the British had conquered the whole of the island of Java.  This proclamation in Malay announcing the capture of Batavia is dated 11 August 1811, exactly 203 years ago today. The manuscript (Or.9484), which has just been digitised, was issued in the name of Lord Minto and bears his seal but is signed by Raffles.  The document reflects the British desire to see trade return to normal as soon as possible, and invites the people of Batavia to compare conditions under British and Dutch rule, seemingly confidently anticipating a favourable response:
‘It is announced that Batavia is now British territory and is once again open to all ships, of whatever size and of any nationality, carrying trade goods and foodstuffs, who are all welcome to come and trade freely. There will be no obstruction by warships, because the port of Batavia is now controlled by the British and will be administered with justice. His Excellency the Governor General cordially welcomes merchants of all nationalities to trade in Batavia, and invites them to see how well their business and profits fare under the British administration of Java, and how this compares with Dutch rule.’ (Maka hendaklah diketahui bahwa sekarang ini negeri Betawi sudah menjadi bandar Inggeris dan adalah sedia terbuka akan menyambut segala kapal dan keci dan sebarang perahu yang ada bermuat dagangan dan makanan pada tiap2 bangsa dagang, supaya boleh datang berniaga dengan sukanya.  Maka tiada lagi boleh diadang oleh kapal perang sebab sud(ah) terdiri bandar Inggeris di dalam tanah Betawi serta dengan adilnya.  Adapun sekarang ini bahwa Seri Maharaja Gawarnur Jenderal Yang Maha Mulia dipersilakan segala bangsa orang dagang datang ke Betawi berniaga, serta boleh melihat untung dan laba dari sebab kedatangan Inggeris ke tanah Jawah dan bolehlah sekalian menimbangkan perintah Inggeris dengan Belandah atau persamaan.) 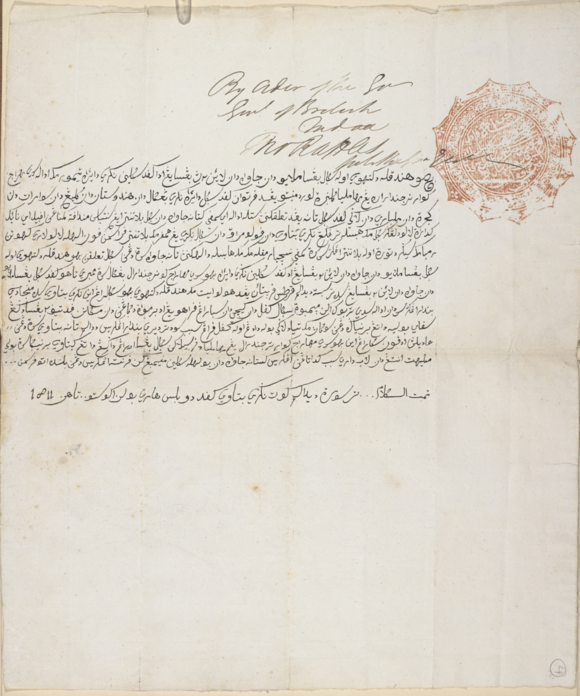 The proclamation is stamped with a red ink seal, inscribed in Malay. The seal was probably commissioned by Raffles while in Melaka as part of the preparations for the Java expedition. The inscription may have therefore have been calligraphed by Ibrahim, head of Raffles’s secretariat, the brother of Ahmad Rijaluddin whose account of a visit to Calcutta appeared on this blog recently. As discussed in another posting on this blog, there was a tradition of the use of ‘local’ seals in Arabic script by British officials in Asia and the Middle East, due to the long-established custom of using Persian seals by British East India Company officials serving in Mughal India. 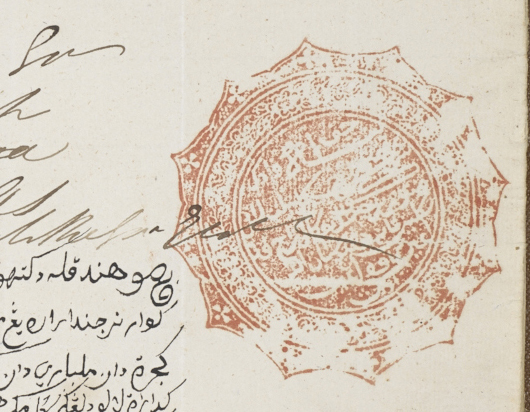 Posted by Annabel Gallop at 2:13 AM