Soother of sorrows or seducer of morals? The Malay Hikayat Inderaputera

Hikayat Inderaputera, ‘The tale of Inderaputera’, is a Malay romance about the fantastical adventures of Prince Inderaputera, son of the king of Semantapura. At the age of seven he is abducted by a golden peacock and falls into the garden of an old flower-seller, who brings him up as her grandson. Inderaputera’s fine looks, intelligence and manners lead him into service with King Syahsian, and he is sent off on a quest for a cure for the king’s childlessness. Among his many encounters is with the 'swan-maiden' found in folklore the world over: spying the princess of the fairies and her maidens bathing in a lake, Inderaputera steals their clothes,without which they cannot fly away, and only gives them back in return for a magical talisman. At last he succeeds in obtaining the flower of the white lotus that gives King Syahsian a daughter, Mengindra Seri Bunga. When she comes of age Inderaputera wins the princess’s hand, and he is then reunited with his parents and ascends the throne in his own country. 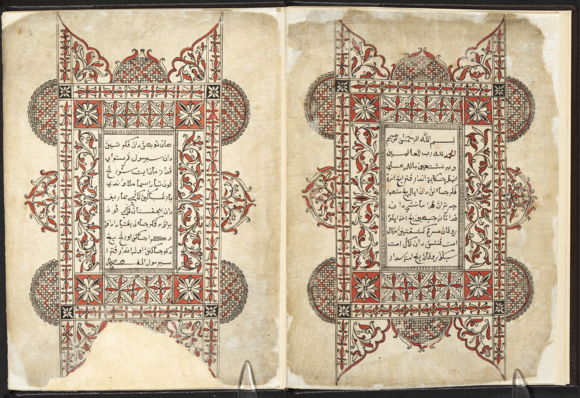 Opening pages of the Hikayat Inderaputera, with the double decorated frames digitally reunited (as the MS is currently misbound). British Library, MSS Malay B.14, ff. 1v-2r.

Probably composed in the late 16th century, Hikayat Inderaputera was one of the most widespread and popular Malay tales, and is known from over thirty manuscripts dating from the late 17th century onwards. The story is found from Sumatra to Cambodia and the Philippines, not only in Malay but also in Acehnese, Bugis, Makasarese, Sasak, Cham, Maranao and Maguindanao versions (Braginsky 2009). At its core is probably a Persian mathnawi based, in turn, on the Hindi poem Madhumalati written around 1550 (Braginsky 2004: 388), but it also drew on Malay Islamic epics such as Hikayat Amir Hamzah and Javanese Panji stories. With its depictions of other-worldly palaces, battles with ferocious monsters, and poignant love scenes, Hikayat Inderaputera offered something for everyone, and could be read not just as an adventure romance but also as a Sufi allegory of the spiritual journey of the soul.

The Hikayat Inderaputera can be characterised as a Malay penglipur lara tale, a ‘soother of sorrows’, recited to ease the cares of the listeners, by enrapturing them and transporting them to a different world. An illustration of its potency occurs in another Malay tale, the Hikayat Isma Yatim, when a lady of the court, dreaming of the king’s caresses, began to read Hikayat Inderaputera to dispel her angst (Braginsky 2004: 386). Outraged by the popularity of this seemingly frivolous escapism, the story earned the ire of the stern Gujerati theologian Nuruddin al-Raniri, the senior religious official at the court of Aceh, and in his historical compendium Bustan al-salatin he called Hikayat Inderaputera 'a pack of lies' (nyata dustanya). In 1634 Nuruddin starting composing the Sirat al-mustakim, an immensely influential guide in Malay on correct observance of religious law, in which he condemned the Hikayat Inderaputera, together with the Hikayat Seri Rama and other tales ‘of no religious value’ for use in the lavatory unless the pieces of paper happened to include the name ‘Allah’. 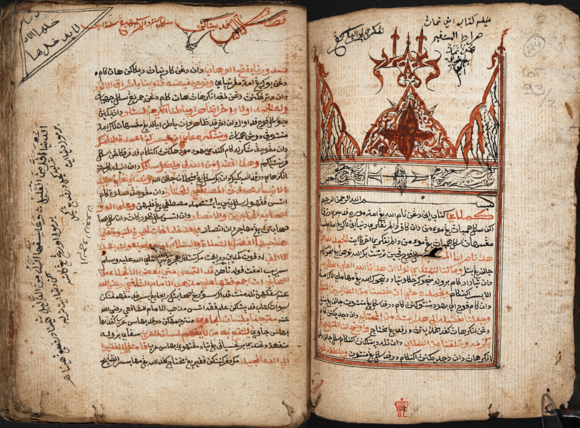 The British Library holds one manuscript of the Hikayat Inderaputera, MSS Malay B.14, shown at the top of this page, which is incomplete and undated, and of unknown provenance. The manuscript is written in a very distinctive neat hand, which Sri Rujiati Mulyadi (1983: 17) noted was very similar to that of another Malay manuscript held in the Library of SOAS (MS 174239) containing two texts, Hikayat Cerita Raden Mantri dated 1820, and Hikayat si Miskin dated 1821, both copied in Padang in west Sumatra. A Minangkabau provenance would be entirely consistent with the style of illuminated frames of MSS Malay B.14, with the palette of red and black, and the semi-circular arches on the vertical sides.

The manuscript of Hikayat Inderaputera is written in a distinctive neat small hand, with two styles of the letter kaf. In the middle in red is the word al-kisah, with a decoratively knotted final letter, ta marbuta, signifiying the start the episode of Inderaputera's abduction by the golden peacock: Al-kisah peri mengatakan tatkala Inderaputera diterbangkan merak emas. British Library, MSS Malay B.14, f. 5r (detail).

In her doctoral study of Hikayat Inderaputera, Mulyadi (1983: 41-43) also turned her attention to another Malay manuscript in the British Library, Hikayat Putera Jaya Pati (MSS Malay B.5), because this tale had earlier been described as a shorter version of Hikayat Inderaputera. In fact, despite some similarity of motifs – the seven-year old Prince Putera Jaya Pati is lured away into the forest by a golden horse, is brought up by a wise old man, and has many adventures before marrying a princess and returning to rule in his own country – the two stories are quite different. 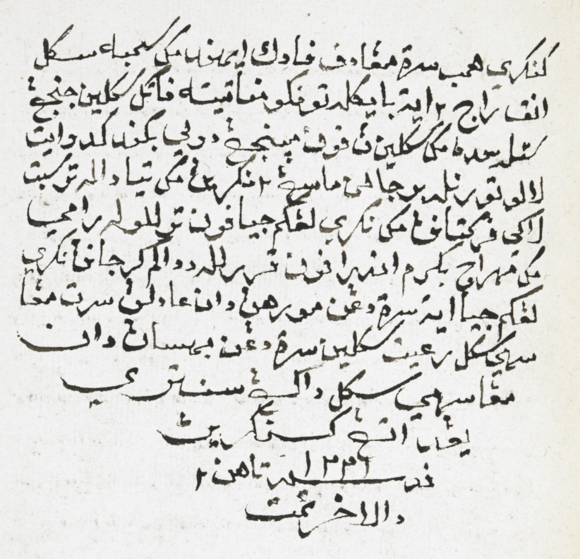 All the Malay manuscripts shown here have been fully digitised and can be accessed on the Digitised Manuscripts site.