In December 1810, Thomas Stamford Raffles (1781-1826) arrived in Melaka. He bore the title ‘Agent of the Governor General to the Malay States’, having been entrusted with a confidential mission by Lord Minto, Governor-General of Bengal, to prepare for a British invasion of Java, at that time held by Franco-Dutch forces loyal to Napoleon. Raffles immediately began a flurry of diplomatic letter-writing to neighbouring Malay states, appealing for support, in both moral and practical terms, for the forthcoming British campaign. About 120 original Malay letters sent in reply to Raffles from this period have survived in the Raffles Family Collection (MSS Eur D 742/1). All these Malay letters have now been digitised, and have also been published with the full Malay texts accompanied by English translations by Ahmat Adam (2009). 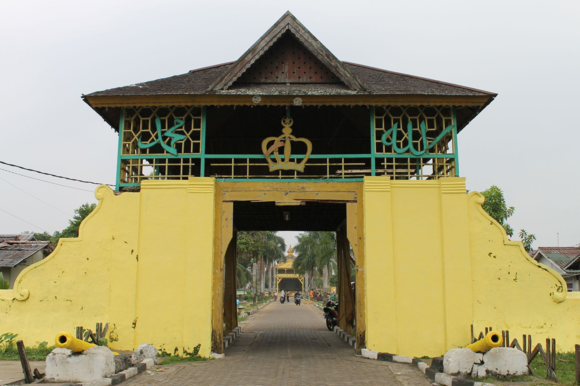 Entrance archway to the palace of Pontianak, Istana Kadriah, painted in yellow, the Malay colour of royalty. Photograph by A. Gallop, September 2015.

Naturally some Malay rulers were more disposed to help than others, responses being shaped by a variety of considerations, reflecting local political strategies and interests. A very cordial correspondence ensued between Raffles and Sultan Syarif Kasim (1766-1819), who in 1808 had succeeded as the second ruler of Pontianak (now in the Indonesian province of West Kalimantan). As has been emphasized by the historian Mary Somers Heidhues, both Sultan Syarif Kasim and his father Sultan Syarif Abdul Rahman, the founder of Pontianak, ‘used, in a way few of their peers could, their personal relations with Westerners to both manipulate them and hold them at a distance’ (Heidhues 1998: 276). This adroitness is apparent in four original Malay letters from Kasim to Raffles, not least in their beautiful illumination. Three letters date from early 1811, when Raffles was based in Melaka, and one from 1814, by which time the British expedition had successfully taken place, and Raffles was ensconced as Lieutenant-Governor of Java. In the early letters Kasim seeks British support against his neighbour the sultan of Sambas, emphasizing the complicity of Sambas in the seizure of a British ship, the Commerce, and the murder of her crew, while in the letter of 1814 Kasim reports that all is now calm around Sambas and that the seas are safe from piracy. Kasim is also most solicitous to respond to any requests Raffles might have made for rarities, and with one letter he sends a pair of orangutans. In the long letter shown below he mentions that he is sending two Malay manuscripts requested by Raffles – a legal text, Undang-undang, and the Hikayat Iskandar Zulkarnain – as well as a golden spear. In the middle of the seal is Sultan Syarif Kasim’s name and title together with those of his father and grandfather, while the border bears a religious inscription comprising appeals to God, addressed by a selection of His ‘Beautiful Names’ (al-āsmā' al-ḥusnā). The border inscription is not easy to decipher, for the words are written in ‘disconnected letters’, which is in fact an amuletic device often found in Islamic manuscripts believed to strengthen the power of the words so treated. Certain elements of the border inscription are more unambiguously talismanic in nature: Ma‘rūf al-Karkhī (d. 800) was a Sufi saint who lived in Baghdad, whose name is frequently invoked for protection in Malay letters and seals, while Budūḥ is an artificial amuletic word derived from a magic square. This border inscription and the iconic octagonal diamond shape of the seal were introduced by Kasim's father Abdul Rahman, who founded Pontianak in 1772, and all subsequent sovereign seals of sultans of Pontianak, up till the end of the 19th century, exhibit these characteristic features.

Sultan Syarif Kasim’s seal is also notable for its fine calligraphy, with certain letters (such as the yā’ of Bārī and the lām-sīn ligature of al-Sulṭān) dramatically extended to ‘support’ the lines of the inscription. These ‘extended letter lines’ are a characteristic feature of some seals from Pontianak and neighbouring Mempawah. In two of Kasim’s earlier seals, from his time as crown prince of Pontianak and ruler (Panembahan) of neighbouring Mempawah, the inscriptions appear to be placed on ruled lines. A close inspection reveals, however, that the straight lines are in fact stylized letters, which are indicated with asterisks in the reading of the inscriptions given below. 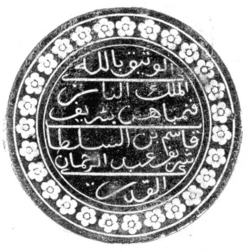 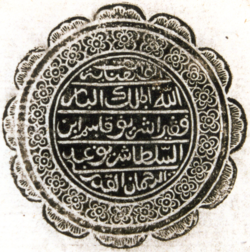 In compiling data on Islamic seals from west Kalimantan, I was greatly assisted by an eminent local historian of Pontianak, Dato' Drs Hei Abang Zahry Abdullah, after meeting at a conference at the Brunei History Centre in 2006. Although Bapak Zahry sadly passed away a few years ago, on a recent visit to Pontianak in September 2015 to attend the International Conference on Nusantara Manuscripts, I was glad to have the opportunity to meet his widow to express my appreciation of Bapak Zahry's invaluable work. 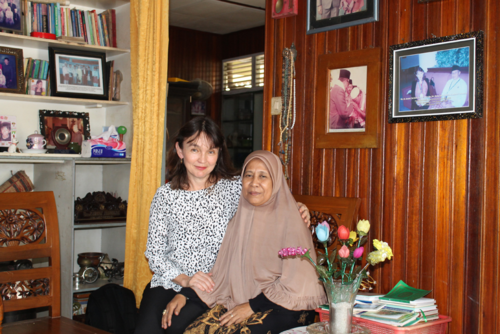 With Ibu Zahry in Pontianak in September 2015, with on the wall a photograph with Bapak Zahry in Brunei in 2006.