From the pocket miscellany (Add.MS.27261), with its exquisite miniature illuminations, compiled in 1410-11 for Timur's grandson Sultan Jalal al-Din Iskandar, ruler of Fars, to unique historical documents and literary manuscripts, the Persian Manuscripts collection at the British Library is one of the most significant collections in the world in both size and importance. Consisting of over 11,000 works in almost as many volumes, it combines the two world-class collections of the British Museum and the India Office Library. These manuscripts originate from the whole of the Persianate world, in particular Iran, Central Asia and India and range in time from the 12th century to recent years, representing most of the traditional fields of humanities and religious studies. Many of the Persian manuscripts are copies of rare texts, with examples of some of the finest illustrated Mughal, Timurid and Safavid paintings. 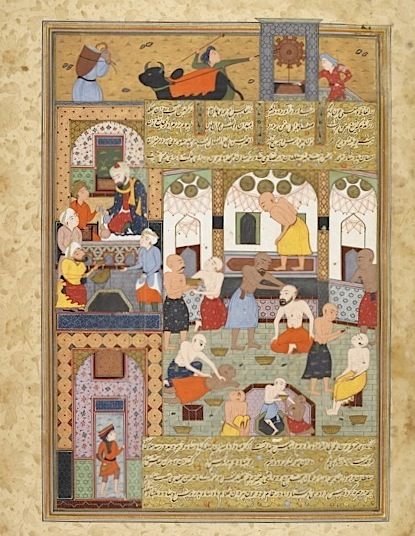 Scene from the Shāhnāmah (Book of Kings): Bath scene, illustrating the story in the preface of how Firdawsī scornfully gave away to a bath house attendant half the paltry reward Sultan Mahmud gave him for writing the Shāhnāmah (IO Islamic 3540, f. 10r)

Although printed catalogues exist for most of this material, only some of the catalogues are available online. Moreover, very little of the collection has been digitised. Our Persian manuscripts have, until recently, only been accessible onsite to those who can physically visit the British Library to study in the Asian and African Studies reading room. With limited access to catalogue records, the collection has therefore been much underused.

The British Library is now in Phase 3 of a program to enable digital access to the Persian collections. The project involves creating catalogue records for uncatalogued manuscripts, standardizing existing print records and creating digital files to make them available online. At the same time we are digitising and putting online some of the most significant manuscripts in the collection. During the first two phases, in partnership with the Iran Heritage Foundation and other supporters, we digitised 50 manuscripts and completed the cataloguing of all acquisitions made after 1903. In this third phase we are focussing on cataloguing the Persian manuscripts that were formerly part of the Mughal Imperial Library, Delhi, which were transferred to the India Office Library by the Government of India in 1876.

To date we have digitised 89 manuscripts which are available, cover to cover, at the British Library's Digitised Manuscripts (see list below for details). This includes 34 Judaeo-Persian manuscripts which have been digitised as part of the on-going Hebrew Manuscripts Digitisation Project. Our completed catalogue descriptions are being uploaded to the Library's own online catalogue of archives and manuscripts and additionally details of over 2,500 works are searchable on Fihrist, a union catalogue of some of the major Arabic script manuscript collections in the UK.

Details of a further 76 works on Qur'anic literature which were printed but never published are to be found in a subsequent blog: A newly digitised unpublished catalogue of Persian manuscripts: postscript.

We are currently seeking further funding to complete the current phase and to create digital records for all the manuscripts described in the groundbreaking catalogues of the late 19th century and early 20th century by Charles Rieu and Hermann Ethé. We also aim to digitise further selected Persian manuscripts. If you would like to support us or can help in any way please look here for more information.

We are grateful to our sponsors and partners for the financial support that has enabled this project:

Friends of the British Library

Below we have listed the Persian manuscripts in the British Library which have been digitised up to the present time.  Click on the manuscript number at the head of each description to go directly to the relevant entry on the British Library's digitised manuscripts site. Once there, click on the thumbnail image of the manuscript to get to the full digitised version which will open in a new window (please note that all subsequent digitised manuscripts that you view will appear in this same window). You can choose to view one page at a time or two together in book format (i.e. as if you were reading it). Make sure, however, that you select 'Right to Left' in the 'Direction' box.

Also included in the list below are links to catalogue descriptions, blog posts and other related documents for each manuscript, where available.  If a manuscript is illustrated, the description will contain direct links to the illustrations.

The list will be updated regularly to reflect ongoing work.

Note: These manuscripts are also available to read in our Asian and African Studies Reading Room (Registered readers only - see Registering for a Reader Pass) . Certain illustrated mss, however, are restricted, in which case special permission must be obtained first. Note also that there are some discrepancies between the numbering of the printed catalogues and the form used for ordering. For example:

Add.MS.16561
Shamākhī anthology. A collection of poetry by 12 different authors of the 14th and 15th century copied in 1468 on Chinese imported paper in the capital city Shirvan by Sharaf al-Dīn Ḥusayn, a royal scribe, possibly at the court of the Shirvānshāh Farrukh Yasar (1462-1501). The manuscript contains one double-page and seven single miniatures. Restricted
Link to Rieu pp. 734-5
Blog: ʻTwo Persian ‘Ming’ manuscripts on view at the British Museumʼ

Add.MS.27262
Saʻdī, Būstān dated at Agra, 26 Rabīʻ I 1039 (13 November 1629) and illustrated with ten miniatures. Copied in large elegant nastaʻliq by the well-known physician and poet Ḥakīm Rukn al-Dīn Masʻūd, known as Ḥakīm Ruknā, who went to India in the reign of Akbar and became one of Shah Jahan’s favourite poets. Profusedly decorated margins. Bound in original painted and glazed covers. Restricted
Link to Rieu p. 602

IO Islamic 138
Jamālī, Khamsah. The only known copy of five masnavis composed by the poet Jamālī who lived at the beginning of the 15th century. Dated 1465 at Baghdad and illustrated with six miniatures. Restricted
Link to Ethé 1284

IO Islamic 3214
Sindbādnāmah, an anonymous version of the adventures of Sindbad in Persian verse. This copy is believed to have been made in Golconda, India, around the year 1575. It contains 72 illustrations in Golconda style. Restricted
Link to Ethé 1236

Or.166
Gulbadan Begam, Aḥvāl-i Humāyūn Pādshāh. Autobiographical account of the reigns of the Mughal Emperor Bābur and his son Humāyūn by Bābur’s daughter Gulbadan Begam (1523-1603). Although this copy probably dates from the early 17th century, it is the only known copy to have survived.
Link to Rieu p. 246-7

Or.343
Muḥyī Lārī, Futūḥ al-Ḥaramayn. A poetical description of the holy shrines of Mecca and Medina and the rites of pilgrimage by Muḥyī Lārī (d.1526 or 1527). Includes 17 miniatures, probably Persian, dating from the 17th century
Link to Rieu p. 655

Or.2451
The Pentatuech, Hafṭarot and Psalms, with vowel-points and accents, masorah magna and parva, followed by a calendar for fixing the Jewish festivals in Judeo-Persian (ff. 362v-378v), 1483-1484. Judeo-Persian

Or.2454
A Hebrew-Persian Glossary of the difficult words of the Bible in Judeo-Persian, followed by a calendar in Hebrew, 1804-1805. Paper, 54 ff. Judeo-Persian

Or.2459
Fragments of Judeo-Persian commentaries on verses from the Pentateuch, and some other biblical books, c. 16th century. Paper, 123 folios. Judeo-Persian

Or 2460
Fragment of a Judeo-Persian commentary on portions of the Prophets, 16th century. Paper, 33 ff. Judeo-Persian

Or.3714
Mīrzā ʻAbd al-Raḥīm Khān, Vāqiʻāt-i Bāburī. The Memoirs of the Mughal Emperor Babur (r. 1526-30), originally written in Chaghatai Turkish and translated into Persian at his grandson Akbar’s request by Mīrzā ʻAbd al-Raḥīm Khān in 1589. This imperial copy, containing 143 illustrations mostly by attributed artists, was completed c. 1590-93. Restricted
Link to Rieu Supplement no. 75
A selection of highlights from this manuscript is available as part of British Library Turning the Pages
E. S. Smart, Paintings from the Bāburnāma: a Study of Sixteenth Century Mughal Historical Manuscript Illustration, PhD thesis submitted SOAS, July 1977

Or.4110
An anonymous 15th century anthology of Persian poets (including Indian poets) assembled in the reign of the Sharqi Sultan Mubārak Shāh of Jaunpur (1399-1402)
Link to Rieu Supplement no. 374

Or.4615
Abū Ṭāhir Ṭarsūsī. Dārābnāmah. An imperial copy containing 157 miniatures, mostly attributed. Mughal. c. 1580-1585. Restricted
Description of Or.4615
Index of artists in Or.4615
Link to Rieu Supplement no. 385
Blog: The tales of Darab: a medieval Persian prose romance

Or.4742
Poetical texts in Judeo-Persian, 1702. Paper, 349 ff.
Persian poems embodying the narrative of the Pentateuch. The volume begins with dedicatory poems, then follows Genesis (folio 5r), and Exodus (folio 168r). The remaining portions are not marked. Folio 348 contains (in a different hand) a duplicate of a portion of Genesis. A number of Persian stanzas with Hebrew headings, folio 2r. A piyuṭ of Eliyah ben Binyamin ha-Levi. Judeo-Persian

Or.5302
Saʻdī. Gulistān copied in 975 (1567/68) in Bukhara (Uzbekistan) and ascribed in the colophon to the famous calligrapher Mīr ʻAlī Ḥusaynī. Includes six Bukhara-style paintings which were commissioned apparently at Akbar's request. The manuscript was 'improved'  in India in Jahangir's reign when seven more paintings were added, probably between 1605 and 1609. Restricted
Blog: What were the Mughal’s favourite books?

Or.5637
Jahānārā Begam, Muʼnis al-arvāḥ, an autograph copy by Princess Jahānārā (1641-81), daughter of Shāh Jahān, of her biography, composed in 1049/1640, of Muʻīn al-Dīn Chishtī with notices of some of his disciples
Blog: Princess Jahanara’s biography of a Sufi saint

Or.6810
Niẓāmī. Khamsah. Late 15th century copy containing one double and 20 single miniatures ascribed to Bihzād, Mīrak and others. Restricted
Description of Or.6810
Blog: The Khamsah of Nizami: A Timurid Masterpiece

Or.7573
Ḥāfiẓ. Dīvān, containing eight miniatures and text decorated throughout with birds. Imperfect at end. Copied by ‘Abd al-Ṣamad Shīrīn-qalam in 990/1582-3 for Asaf Khan in Akbar's reign and subsequently enhanced by Jahangir c. 1611 with nine illustrations, eight of which are preserved here. Restricted
Blog: Jahangir’s Hafiz and the Madrasa Jurist

Or.8193
The 'Yazd Anthology', a collection of Turkish works written in calligraphic Uighur script in Yazd in 1431 with the addition of the Persian Dīvāns of Kamāl-i Khujand and Amīrī in the margins. The Uighur scribe was Mansur Bakhshi who was working for Mir Jalal al-Din the governor of the city. Ornamented throughout with geometric floral and other designs.
Article: G. L. M. Clauson, “A Hitherto Unknown Turkish Manuscript in "Uighur" Characters”, Journal of the Royal Asiatic Society of Great Britain and Ireland, No. 1 (Jan., 1928), pp. 99-130

Or.8212/166
Fragment of a Judeo-Persian letter with references to trading in sheep and textiles. Late 8th century, acquired by Sir Aurel Stein at Dandan-Uiliq, in present day Xinjiang Uyghur Autonomous Region, China. Judeo-Persian

Or.10444
Hagadah fragments and other texts related to Passover, 17th to 18th century. Paper, 48 ff. Judeo-Persian

Or.10711
Collection of Judeo-Persian poetical works, 1898. Paper, 83 ff.
The story of Barlaam and Josaphat in a Judaeo-Persian metrical version, based on Ben ha-melekh veha-nazir of Abraham ben Samuel ibn Hasdai. The story of Solomon and the three merchants, in verse. Judeo-Persian

Or.12076
Razmnāmah, the last five books of the Persian translation from the Sanskrit Mahabharata by Naqib Khān. Dated 1007/1598 it contains 24 paintings attributed to well-known Mughal artists. Restricted
Blog: Razmnamah: the Persian Mahabharata

Or.12208
Niẓāmī, Khamsah. An imperial copy of the Khamsah by Niẓāmī Ganjavī (1140 or 41-1202 or 3), dated between 1593 and 1595 and copied by ʻAbd al-Rahīm ʻAnbarīn-qalām. It contains 38 illustrated folios attributed to the major artists of the imperial Mughal studio. Original lacquered binding. Restricted
Barbara Brend, The Emperor Akbar’s Khamsa of Nizami. London, 1995

Or.12857
ʻAbd al-Karīm al-Qādirī Jawnpūrī, Javāhir al-mūsīqāt-i Muḥammadī a musical treatise dedicated to Muhammad ‘Adil Shah (r.1626-56), being a refurbishment and expansion in Persian dating from the 17th century of an earlier (c. 1570) illustrated manuscript, a translation into Dakhini of the Sanskrit musical treatise Saṅgītaratnākara, by the 13th century author Śārṅgadeva. Contains 48 Deccani miniatures dating from around 1570. Restricted
Blog: Indian Music in the Persian Collections: the Javahir al-Musiqat-i Muhammadi (Or.12857). Part 1 and Part 2

Or.12988
Abu'l-Fazl ibn Mubārak, Akbarnāmah. Volume 1 of Abu'l-Fazl's history of the reign of Akbar, describing Akbar's Timurid ancestry and the reigns of Babur and Humayun, completed ca.1602 with 39 paintings. Contains ownership notes (subsequently pasted over) on the flyleaf by Jahangir and Shah Jahan. Restricted