A Khamsah with illustrations ascribed to the painter Bihzad (Add. 25900)

Today's guest post by the Islamic art historian Barbara Brend celebrates the completion of a project sponsored by the Barakat Trust to digitise two Timurid manuscripts in the British Library's collection, both thought to be, in part,  illustrated by perhaps the most celebrated of Persian painters, Bihzad. Both manuscripts are copies of the Khamsah by Nizami. The later of the two, Or.6810, dating from  the end of the 15th century, was digitised some time ago and is the subject of two earlier posts (ʻThe Khamsah of Nizami: a Timurid Masterpieceʼ and ʻA Jewel in the Crownʼ). Add.25900 is the earlier copy. Clicking on the hyperlinks will take you directly to the digital copy and further details including a list of all the miniatures with hyperlinks can be accessed from our Digital Persian Project page.

The Khamsah (Quintet) of Nizami Add. 25900 is an example of a manuscript produced over time. A volume of princely quality necessarily involved the work of a number of specialists: the scribe probably in overall control of the workshop, binders, illuminators, perhaps painters, possibly even paper-makers unless this essential were bought in.  But there might be a failure of patronage: the initiating patron might die, or a political upheaval might scatter the workshop.  In these cases a manuscript on which talent, time, and money had already been expended might be put aside and at some later date a new patron would order further work on it. 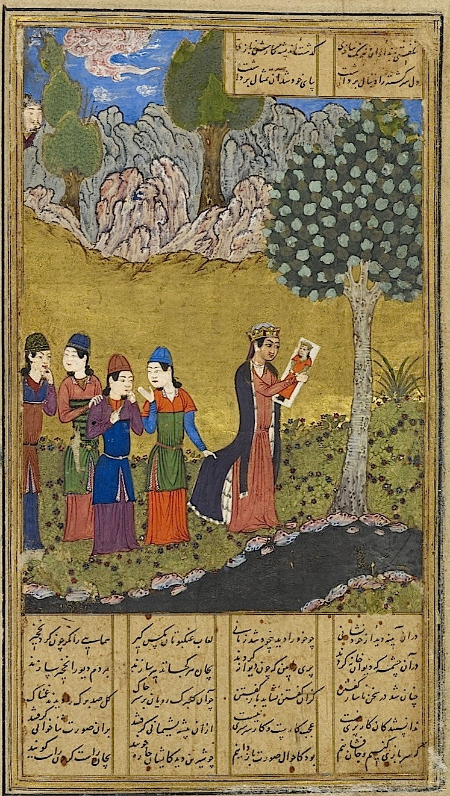 The Khamsah has a colophon dated 846/1442; its last private owner is named in a note on the fly-leaf, “James R. Ballantyne, Nov. 1837”.  Ballantyne (1774-1864) was a distinguished Scottish orientalist who worked in India from 1845 to 1861, subsequently becoming Librarian to the India Office.  One illustration in the Khamsah is usually considered, on stylistic grounds, to have been painted in Herat at the time of the colophon. It shows “Shirin contemplating the picture of Khusrau” (f. 41r).  For the third time Shapur, the friend of prince Khusrau, has hung his portrait on a tree in the mountain pastures where the princess Shirin disports herself with her ladies. The ladies have destroyed the first two pictures, but Shirin, already entranced by the first picture, herself moves to take possession of the third. The ladies, whose gestures indicate a degree of concern, have the pale and elegantly drawn faces characteristic of Herat painting on the 1440s; the face of Shirin, however, has been repainted with more emphatic features and an impression of volume in India in the time of Ballantyne. From the upper left Shapur observes the effect of his painting; he is concealed amongst rocks in which the painter of the 1440s has taken advantage of Chinese conventions of shading to introduce faces of grotesques, which also give an impression of volume, and thus the very opposite of the faces of the ladies. 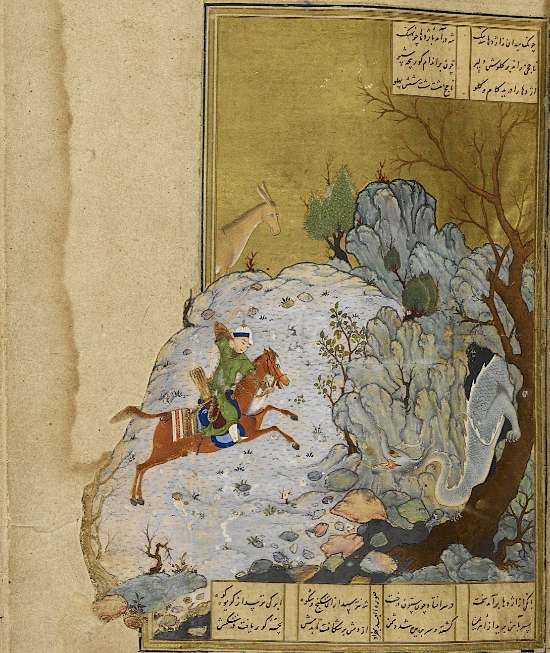 Half a century later, in or around 1490, fourteen illustrations were added in Herat. “Bahram Gur slays a dragon” (f. 161r) is of this period.  The young prince Bahram Gur is a great hunter, particularly of the gur, the onager or wild ass. With a wealth of detail usually bestowed on the description of a beautiful young woman Nizami describes a female onager that catches Bahram’s attention. The prince follows her and she leads him to the cave of a dragon.  Bahram slays the dragon, slits it open and finds the onager’s foal inside. She then leads him on to a treasure that the dragon was guarding, and she vanishes.  The illustration bears an attribution to the great artist Bihzad, written vertically in the lower text panel.  It does not convey the sense of perfected design that we sometimes associate with the work of Bizhad, but it does demonstrate a keen imaginative sympathy.  The strongly coloured group of prince and horse are evidently dynamic, but the prince looks very young and his horse is tense and awkward: the prince could be anyone facing up to a challenge, for instance an artist undertaking the depiction of a subject. The mother onager is portrayed as something more than an ordinary animal: the painter seems aware of the poet’s description; he shows both the onager’s eyes, which slightly humanizes the face; and he places her just behind the horizon in the position traditionally used for observers.  The dragon, on the other hand, does not engage our sympathies; it remains entirely other.  There is, however, a strong sense of its movement as it creeps down from its high cave entrance, with the hint that there is a great deal more of its length to emerge, and perhaps even an impression that the part we already see is heavy with the foal it has eaten. 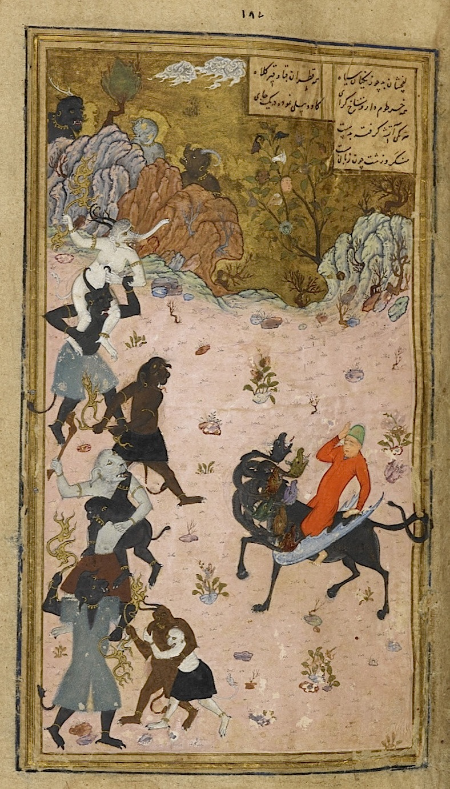 From the same book of the Khamsah, Haft Paykar (Seven fair Forms) is “Mahan confronted by demons” (f. 188r) from the story told to Bahram Gur in the Turquoise Pavilion. Already a rich young man, Mahan has been lured into seeking greater wealth and has found himself in a desert place confronted by demons with the heads of elephants and bulls, who carry flames. Further to this, the very horse that he was riding has sprouted wings and become a seven-headed dragon. The Herat painter—is this again Bihzad, working in a slightly different mode, or is it another?--gives the subject a slightly comic treatment that does not detract from its fundamental seriousness. With the clarity of late fifteenth-century Herat painting the demons, individualised as precise shapes, form a “road block” down the left-hand side. As in the previous picture, the rider-and-mount group is differentiated from the rest by strong colour; but here they do not press forward, instead the dragon heads turn on Mahan who strains backwards. The only element that moves forwards is the serpentine tail behind Mahan, while the dragon’s wings seem to hold Mahan like a vice. 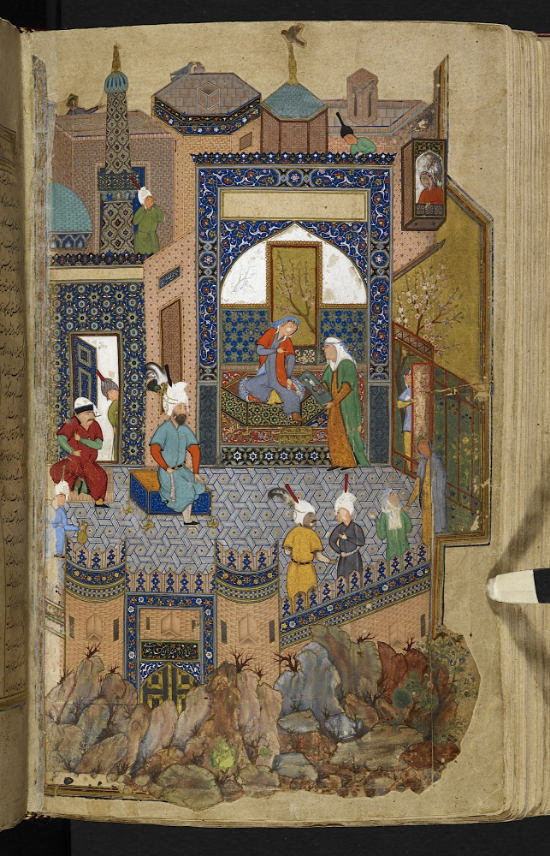 Evidently the manuscript was transported to Tabriz, when this was the centre of Safavid rule, as four illustrations were added in 1530s or early 1540s.  In this, the grandest of the four, Iskandar (Alexander the Great) has come to visit Nushabah, queen of Barda, in the guise of his own ambassador (f. 245v). Nushabah sees through his pretence and demonstrates the accuracy of her perception by showing Iskandar a picture of himself.  With its rocky foreground, this illustration still recalls Herat painting, but Iskandar’s turban, with its bold plumes and the elongated shape caused by its wrapping round a cap with a high central projection, proclaim the Safavid context—as do the turbans of various male attendants who, according to the text, should properly be female. Nushabah may not claim our attention at first, but gradually she does, wearing rather more red than Iskandar, enthroned and sitting in a royal pose, gesturing to the picture that shows she is not mistaken, the whole framed in a magical architecture.

Posted by Ursula Sims-Williams at 4:23 PM

Many thanks to Dr Brend for an erudite and perceptive post, with valuable observations as to which parts of some paintings have ‘the Bihzād touch’ and which do not. I would like to point out that there are other grounds besides stylistic ones for assigning the painting on folio 41r to ca. 846/1442. It is the only one in Add. 25900 that has not been cut out from another manuscript and pasted in, as can readily be seen from the distorted text frames on the other illustrated folios and the cut-out edges of those parts of miniatures that extend beyond them (see e.g. 245v, top and bottom). I intend to provide more details on this and related matters in a future posting, inshallah.