Among the Malay manuscripts in the British Library which have just been digitised are a number of vocabulary lists and dictionaries in Malay, compiled by visitors to the region as aids to learning the language. The study of Malay in Europe dates back to the very first voyages to Southeast Asia in the 16th century, for Malay functioned as the lingua franca for the whole of the archipelago, and was an essential business tool for both merchants in search of spices and missionaries in search of souls. 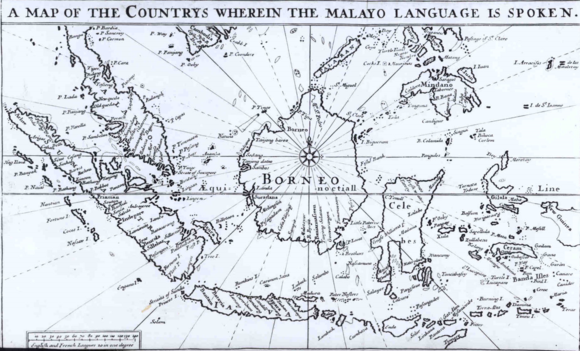 Map showing the lands where the Malay language was used, from Thomas Bowrey, A dictionary English and Malayo, Malayo and English (London, 1701). British Library, 68.c.12

The earliest Malay book printed in Europe is a Malay-Dutch vocabulary by Frederick de Houtman, published in Amsterdam in 1603, and an English version of this Dutch work became the first Malay book printed in Britain in 1614. However it was only in 1701 that the first original Malay-English dictionary was printed in London, the work of Thomas Bowrey (ca. 1650-1713), an East India Company sea captain, who explained in the Preface the urgent need for such a publication: “… I finding so very few English Men that have attained any tollerable Knowledge of the Malayo Tongue, so absolutely necessary to trade in those Southern Seas, and that there is no Book of this kind published in English to help the attaining of that Language; These Considerations, I say, has imboldened me to Publish the insuing Dictionary …” (Bowrey 1701). A draft manuscript version of Bowrey’s dictionary (MSS Eur A33), in his own hand and probably dating from the late 17th century, has just been digitised. It is probably the very volume which Bowrey mentions in the dedication of his publication, “To the Honourable the Directors of the English East-India Company”: “The following Work was undertaken Chiefly for the Promotion of Trade in the many Countries where the Malayo Language is Spoke, which your Honours having perused in Manuscript, were pleased to approve of; and to Incourage the Publishing of it …” 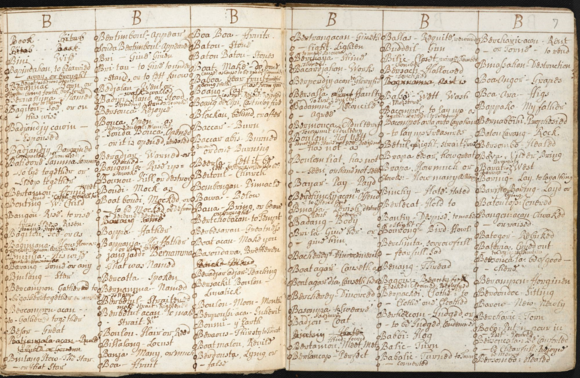 After Bowrey’s pioneering work, it was not until the late 18th century that British studies of Malay developed in earnest, through the efforts of the ‘Enlightenment group’ of colonial scholar-administrators such as William Marsden, John Leyden, John Crawfurd and Thomas Stamford Raffles. The polyglot Leyden gathered together a vast array of linguistic materials, some compiled in his own hand (Or. 15936) and others acquired from different sources (MSS Malay F.2). Raffles too collected vocabularies from all over the archipelago, including a Malay wordlist (MSS Eur E110) which appears to be in the hand of his Penang scribe Ibrahim; this volume is especially valuable for also containing an early register of inhabitants of Penang, listed by street name, with details of origin, occupation, and family members. Raffles also obtained manuscripts as gifts, including a Malay-Javanese-Madurese vocabulary (MSS Malay A.3) from his good friend Pangeran Suta Adiningrat of Madura.  Finally, an English-Malay vocabulary (MSS Eur B37) is of unknown origin but includes at the end hospital lists of treatment with many Indian names such as 'Singh', suggesting the owner might have been a medical officer in the Indian army or of an Indian regiment in Southeast Asia. 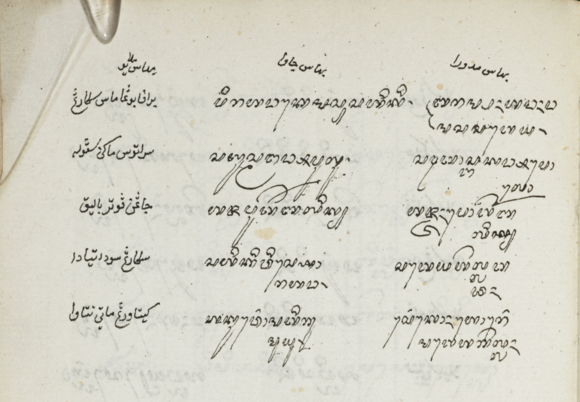 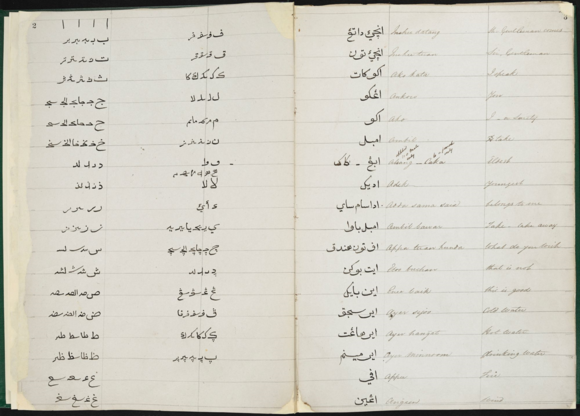 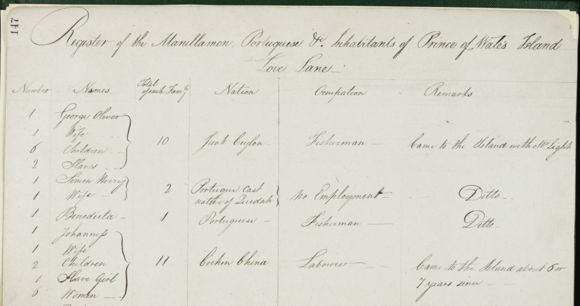 Early 19th-century register of the inhabitants in Love Lane, Penang, including a Portuguese fisherman and his family of ten from ‘Junk Ceylon’ (Ujung Salang, or Phuket), who ‘came to the island with Mr Light’, i.e. Francis Light, in 1786. British Library, MSS Eur E110, f.147r (detail)

These manuscripts join three other Malay vocabularies digitised last year, and are listed below in approximate chronological order.  Many other Malay manuscript vocabulary lists are held in the British Library, often comprising only a few pages within larger volumes, but all are detailed in a recently-published catalogue (Ricklefs, Voorhoeve & Gallop 2014).

Posted by Annabel Gallop at 2:58 PM